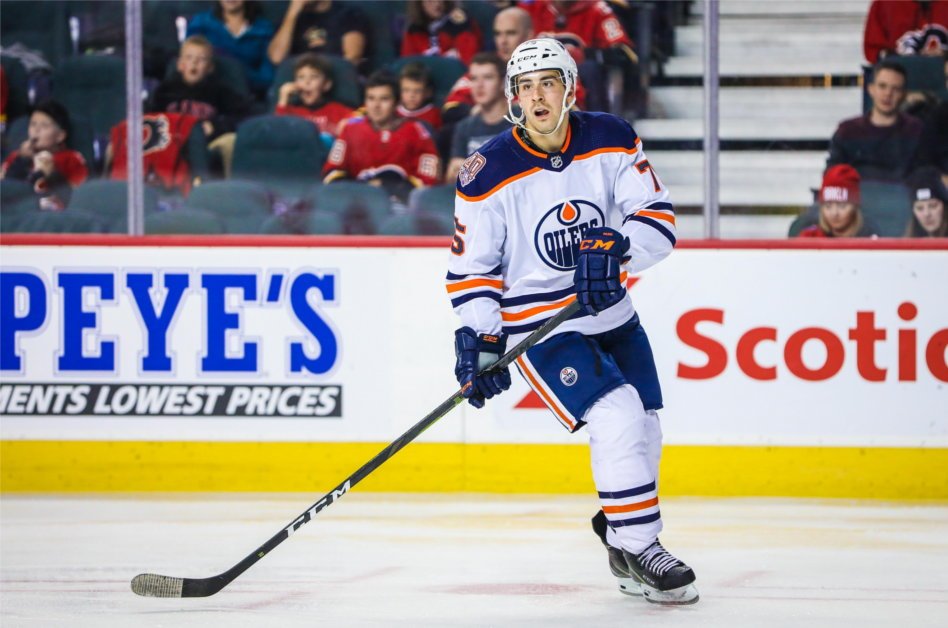 Is Evan Bouchard about to make his season debut for the Edmonton Oilers? The club is struggling on the powerplay and is looking to add some more puck movement and mobility to their lineup. Bouchard’s strengths are exactly what the Oilers are lacking right now.

“He is still an option,” Head Coach Dave Tippett said Saturday in Toronto. “He’s working hard in practice. I give him credit there. We’ve got nine defencemen with Bouch. He’s a good powerplay guy. Our powerplay has struggled a little bit, so we’ve had conversations about that.”

Bouchard, selected 10th overall in the 2018 NHL Entry Draft, made the Oilers out of training camp in his post-draft season. He appeared in seven games that fall, registering a single goal under Todd McLellan. The Oilers sent Bouchard back to the OHL’s London Knights, where he promptly scored 53 points (16 g, 37 a) in 45 games.

Bouchard would join the AHL’s Bakersfield Condors for their playoff run in the spring of 2019. He appeared in eight games and scored eight points (3 g, 5 a) in a sheltered role for Head Coach Jay Woodcroft.

In 2019-20, Bouchard spent the entire season with the Condors, scoring 36 points (7 g, 29 a) in 54 games. Bouchard was especially good for the Condors in the second half of the season. A source within the AHL’s Pacific Division described Bouchard as “NHL-ready” to ‘The Oilers Rig’ last spring.

This season, Bouchard has been around the world. He appeared in 23 games with Sodertalje SK in Sweden’s Allsvenskan. He had 17 points (6 g, 11 a) and was again a weapon on the powerplay.

Should Bouchard enter the lineup tonight against the Jets, the Oilers have two options. They could take out a struggling defenseman like Adam Larsson or Tyson Barrie, or they could take out a depth forward and roll out seven defensemen. All things are on the table for Tippett.

“Whether we get into a situation where we play seven D and try to get him some minutes and get him up and running, we’ll monitor that situation,” Tippett added. “He’s a good, young player that when he gets his opportunity, I think he’s going to jump in and take off. We just have to find him that opportunity.”

At 2-4-0 and in search of answers and a spark, there may be no better time to find the opportunity for Edmonton’s top prospect.