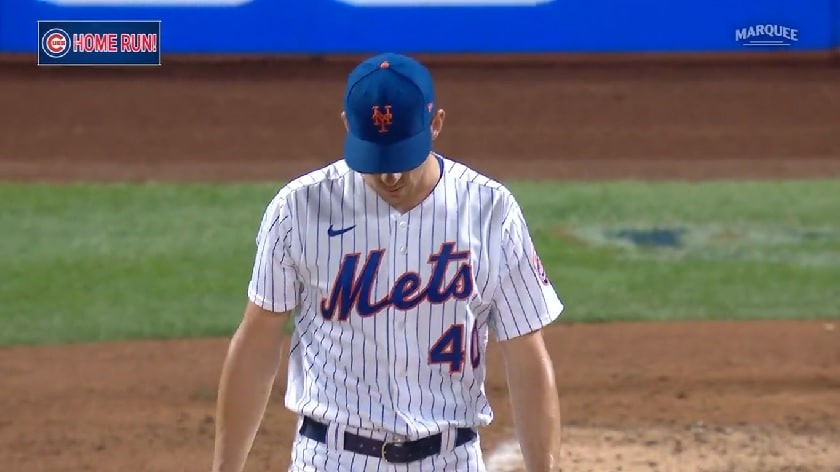 If you don’t know who Micah Hoffpauir is, I can’t blame you. If you remember who he is, then you’re either a rabid Cubs fan, or you’ve been reading my blog since 2008. When Rafael Ortega and Zach McKinstry homered from the left side against Chris Bassitt tonight, I immediately thought of Hoffpauir, who hit his first career home run against Pedro Martinez, and then gave the Cubs a 6-3 lead with his second home run of the game which was off of Ricardo Rincon, who I completely forgot spent any time with the Mets (and by “any time”, I clearly meant “four total innings at the age of 38.”)

There were similarities to both games. Both games happened on rainy nights in September with the Mets’ margin for error razor thin (then for the playoffs, now for the division). Just as Pedro Martinez didn’t have it against the Cubs, Chris Bassitt lost his way tonight, giving up five runs in 3 and 2/3’s, having been pulled after giving up two run scoring singles in the 4th. The difference, sadly, is that the 2008 Mets capitalized on their late inning rallies on the strength of hits by Ramon Martinez and Robinson Cancel in the 8th inning to tie the game, the 2022 Mets could not break through with similar rallies. The most egregious of which came in the 8th when they had the bases loaded and nobody out with Mark Canha at the plate.

But Canha got a strike one call that was a ball in the same spot to the lefty hitting Daniel Vogelbach, and then he struck out awkwardly on a slider for the first out. Eduardo Escobar, turned around to bat righty and face converted outfielder Brandon Hughes, flew out to short center for the second out. Then Buck sent up Darin Ruf to bat for Tyler Naquin and do what he had come here to do, which was mash lefties. But Ruf continued to hit like John Goodman and lined out to Seiya Suzuki to end the threat and end the last real chance the Mets had in the game.

During that game in 2008, the Mets rallied in the ninth and won the game on a Carlos Beltran single off of a Cubs pitcher named Kevin Hart. The only similarity to this game in 2022 was that it was dog night at Citi Field which gave people an insight into the secret life of pets. (Look, it’s the best I could come up with without bringing up “Think Like A Man, Too.”) Hughes finished off the Mets despite a solo HR by Francisco Lindor. At press time, the Giants are up 2-0 on the Braves and Spencer Strider. I had to call in a favor on that one.

Umm, @SFGiants? It's us, Met fans. Been a while. Yeah, those Hunter Pence signs. I remember. We had some good times. Listen, need a favor …

Let’s see how much pull I have in a city I’ve never been to.