Despite The Best Efforts of Angel Hernandez and Paul Sewald … 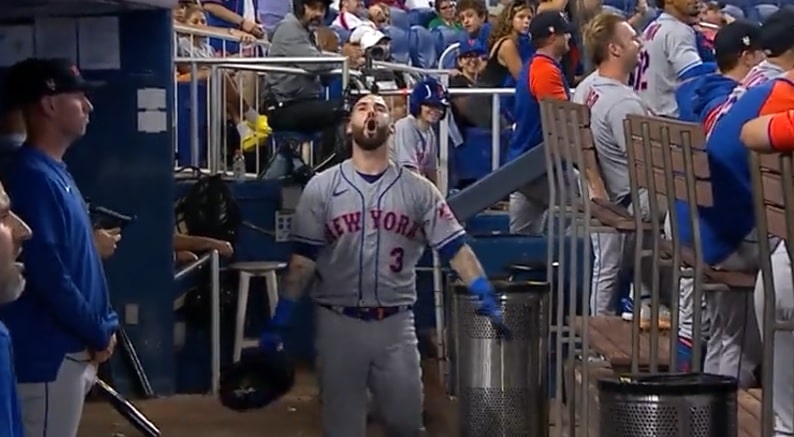 On another day, in another season, things could have turned very differently. But if Sunday wasn’t enough to tell you that the ghosts have turned tail and gone the other way, then I don’t know what to tell you.

In another season, Angel Hernandez’s umpiring crew doing dumb things like calling a ball unplayable from home plate when it’s clearly not the home plate umpire’s call, and calling an infield fly rule on a ball that barely got 50 feet off the ground would have been a knockout punch for this Mets franchise. But this season, they shrug off such maladies and bounce back with nine runs to defeat a team that they’re supposed to beat. Brandon Nimmo’s three run HR in the second was the signal that Angel Hernandez’s clown show wasn’t going to put a big top over their circus, even after his crew decided that throwing out a player on the IL was necessary. (And because that injured player was Max Scherzer, that crew had better hope that they don’t wake up next ot a horse’s head tomorrow morning*.)

It got better from there, as Eduardo Escobar stayed hot, Tomas Nido turned into Johnny Bench with his first home run of the year, and Taijuan Walker offered up a fine blend of blister resistant fastballs to flip the Marlins back into irrelevance and send the ghosts of Hanley Ramirez and Wes Helms back the Orange Bowl. After a stumble against the Nationals, the Mets wound up winning the next two series against bottom feeders and had ensured that they would remain in first place by at least a half game pending the outcome of the Braves/Mariners game in Seattle. By pending, I should really say “bending”, because that game bent the baseball world out of shape and out of their minds.

At 6-1 Seattle in the 8th, a 1 and 1/2 game lead was well in the bag. Julio Rodriguez had homered. Eugenio Suarez had homered. Former Met Sam Haggerty and a Frazier not named Todd had also contributed, and the increased lead was all but ensured. Michael Harris homered in the top of the 8th to make it 6-2, but no biggie. The M’s had a four run lead in the 9th and his 3.9 BB/9 to the mound to close it out. True to form, he started the inning by walking Austin Riley and Matt Olsen to start the inning. But a groundout and a strike out later had Castillo on the verge of helping the Mets grow their lead (though I’ll admit the Mets might not have been at the forefront of Diego’s mind at that point.

A friend of mine made the observation that Michael Harris can’t hit good sliders. But he can sure as hell hit whatever the hell Righty Joely threw as Harris hit his second homer in two innings to draw the Braves to within 6-5. Then the Braves brought in closer Paul Sewald who saved Saturday’s game and turned babyface in the hearts of minds of Mets fans. But just as fast as Paul Orndorff turned back into a heel, Sewald came in and gave up a two run HR to Robbie Grossman to give the Braves the lead in the 9th. Sewald didn’t want to hear what his home crowd had to say. Imagine that.

In a past year, that’s how that game would have ended. This season? The Braves have Kenley Jansen.

I had spent the top of the 9th on a bus cursing to a friend of mine about the Braves’ comeback, and about how since the trade deadline Robbie Grossman has turned into Babe Ruth while Darin Ruf has turned into John Goodman playing Babe Ruth. But when the score reached 8-7, I was walking on the middle island of Queens Boulevard yelling “F-you, Atlanta … F-you Chip Caray … and F-you Paul Sewald! WHOOOOO! WHOOOO! WHOOOO!” With all the traffic roaring by, there couldn’t have been anybody who would have heard me. I thought I was safe. But, and I swear to God this happened, about five seconds later I heard a young sounding person from the angle of what was one of the balconies on the block started yelling “WHOOOOO! WHOOOOO! WHOOOOO!” The child’s screams were loud, passionate, and a little unnerving. Maybe they had just found out about the Mariners’ victory like I had. But I fear that this kid was parroting the crazy person walking on the middle island on Queens Boulevard. I just hope that this kid didn’t retreat from the balcony and yell F-YOU PAUL SEWALD” to their mom or else I was the direct cause of someone getting a butt whoopin’. All because of a relief pitcher that this kid probably never heard of, but if they googled him, I’m sure they’d understand.

*Editor’s note: Max Scherzer and his family have donated time and money to animal rescue charities. They would never harm a horse to make a point to scare the crap out of Angel Hernandez. Just staring him down would do the trick.