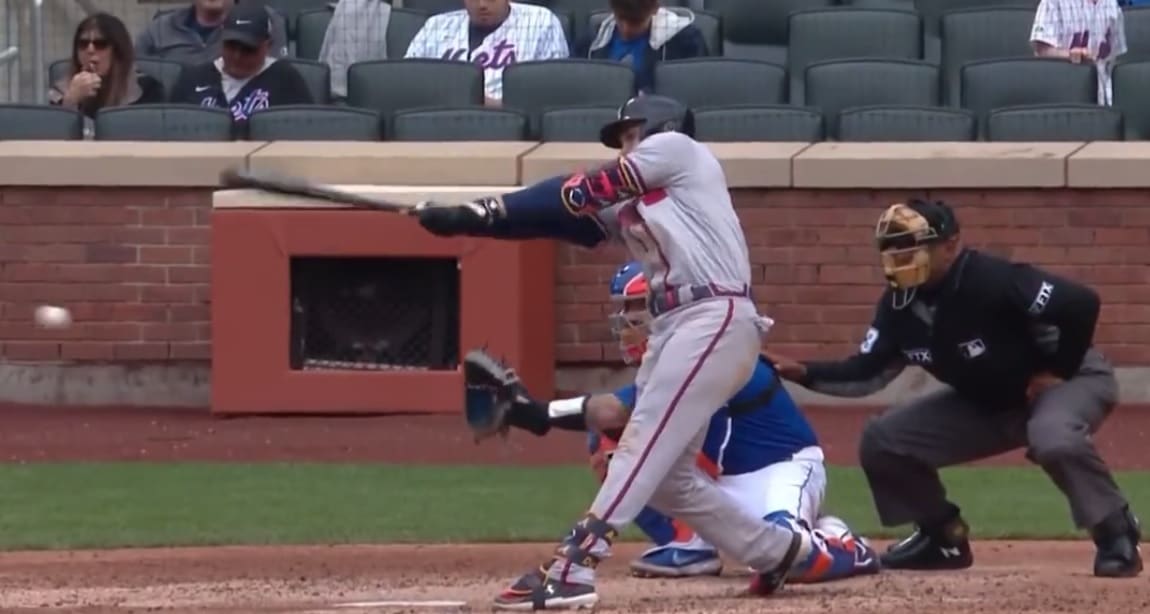 Memories of last season’s five game series against the Braves have been prominent in a lot of people’s minds after Monday night’s loss. “Don’t let the Braves back in the race. You know what happens when the Braves are in the race. They buy instead of sell, they win the World Series, and your team is looking for a manager again.”

The circumstances surrounding this four game series in May are a bit different from the five game series last July. This series isn’t going to make anybody buy or sell, and it’s way too early to make any judgements on the pennant race from these four games, in either direction. But even in May, if you have a chance to bury the champs, you do it. So when the Mets lost last night, the alarm bells went off for a lot of people. So Tuesday’s doubleheader has taken the form of some sort of message sending pivot point. Whatever that means.

It started well with a 5-4 victory in Game 1. Luis Guillorme started the game off with a great diving play, and that set the tone for some great Met defense all game (with one notable exception that we’ll get to.) Travis Jankowski got on base three times with two hits and a walk, and he scored all three times as the Mets “small-balled” the hell out of this game, scoring runs on three singles (one of the infield variety), a fielder’s choice, and a sac fly as they built up a 5-1 lead. Aren’t you glad Travis Jankowski is still around?

In the fifth, Matt Olson hit a three run HR to cut the Mets lead to 5-4, and it came after starter David Peterson threw away a possible double play ball that would have ended the inning if all went right. (Hopefully Peterson doesn’t develop the Jeurys Familia Special: “Oh no I can’t throw to bases” syndrome.) But Olson hit the home run and what the hell, Freddie Freeman was supposed to be in Los Angeles. It started to feel like one of those games that had “impending doom” written all over it.

But the bullpen was incredible. Adam Ottavino threw a perfect 6th inning (and made Adam Duvall miss so badly on a slider that he’s thinking about a career in plumbing right about now), Drew Smith went two scoreless innings while only giving up a walk (his ERA is Adam Ottavino’s uniform number), and Edwin Diaz slammed the door shut for a Game One victory.

The second game also started well. Dom Smith lined an oppo double in the first to score two runs to get the Mets on the board. (Aren’t you glad Dom Smith is still around?) And Pete Alonso chipped in with an oppo dinger in the 6th to make it 3-0. But the star was Cookie Carrasco. Long outings by starters are essential on doubleheader days by at least one pitcher. Cookie delivered. He weaved in and out of trouble but still managed to throw eight (8!!!) scoreless innings. And even though he negotiated a few runners, he never seemed to be laboring. With a runner on third and one out, he needed a strikeout of Marcell Ozuna to keep the Braves off the board. And he was so dominant in striking him out that it seemed like Carrasco was toying with them by allowing them to reach base.

Then in the eighth, pitch 92 was a hard hit double by Matt Olson. I started to wonder how long he would stay in the game. Was he getting tired? Perish the thought. Pitches 93. 94. and 95 made Austin Riley look like he should join Duvall in the plumbing business. And it only took to pitch 96 to end the inning.

Seth Lugo finished off the Braves and the doubleheader sweep. Another series will go into the books without being lost. But with Tylor Megill going tomorrow afternoon, they could absolutely put their feet on the throats of the Braves in this early part of the season. While it’s early, any lead you can build up will come in handy when the first bad stretch comes. We know what happened last year after 100 days in first place. And hey, it’s better than losing three of four, right?

Chad Fairchild for the first game:

A closer look at Dansby Swanson's double that was called fair pic.twitter.com/u39v7CoH4o

And Jeremy Riggs for the second game.

Max Scherzer was ejected from tonight's game for arguing balls and strikes with home-plate umpire Jeremy Riggs from the bench.

The umps are having as good a series as SNY The App is.