Dysfunction, Thy Name Is Sterling Mets … Let Us Pray 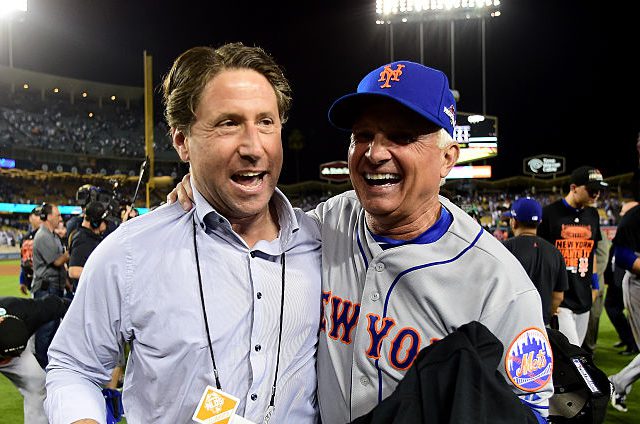 It comes, but once a year. No, not Christmas. It’s the day each year where we hear the story about the resurrection of Fred Wilpon who comes back to preach to his disciples the Book of Dysfunction. Or the New Testament, which is the 2017 Mets media guide. Children go door to door to ask for Shack Shack burgers and old Jason Bay Donruss cards. And then, families everywhere gather ’round the Dysfunction Tree and exchange stories of woe. It’s a magical day that may someday be a national holiday.

Oh look, here comes Marc Carig of Newsday to share his tale! Come, Santa Marc … sit by the Dysfunction Tree, which in actuality is the barrel of an old Timo Perez bat which was broken by a Rick Ankiel fastball, decorated with Bobby Valentine’s fake mustache and Bobby Bonilla’s old playing cards:

Mets owner Fred Wilpon repeatedly protected Terry Collins, even as his son, chief operating officer Jeff Wilpon, and general manager Sandy Alderson sought the manager’s dismissal at various points during his tenure, an example of rifts that resurfaced as a season of promise slipped away, according to more than a dozen team insiders interviewed by Newsday.

People with knowledge of the situation, who spoke on the condition of anonymity, described organizational dysfunction, discord between Collins and his players, and a broken relationship between the manager and the front office. (…)

The 80-year-old owner keeps a low public profile and has not spoken at length about his team since 2013. But privately, his influence in baseball matters still looms large, as shown by his ability to single-handedly shield Collins, whom he visited frequently in the manager’s office before games.

“He got too chummy with him,” one team official said.

What a story. I especially loved the part about the Father and the Son disagreeing about baseball matters that throw the team into turmoil. Then the Holy Ghost goes on the DL with burns from the holy water that was supposed to be Gatorade. Now we shall pray …

Ah, but no Dysfunction Day is complete without a story about a lack of communication. Tell us that one, Santa Marc. Please! Oh boy oh boy oh boy!!!

Communication issues also arose with players, team insiders said, leading to a loss of support within the clubhouse.

Veterans often heard of decisions about playing time through media reports rather than from the manager. Younger players described discovering that Collins had harbored concerns about certain parts of their game, though he didn’t bother to share them directly.

Adding to the frustration, team insiders said, was that Collins created an image through the media as a strong communicator who backs up his players. Players and officials saw that portrayal as inaccurate.

“He has always been difficult to communicate with,” one Met said. “It would be a surprise if he said ‘hey’ to you when you passed each other in the hallway if your name wasn’t [Matt] Harvey or [Yoenis] Cespedes. It’s always been those couple things along with some of the in-game decisions he makes.”

The nadir came shortly after the Mets traded most of their veterans, many of whom had taken an active role in maintaining a functional clubhouse culture. Collins made little secret about his preference for giving the vets more playing time at the expense of younger players, who groused about it.

The trades left the clubhouse filled with the same types of young players who sources said had grown to resent the manager. Collins found himself unable to stem the growing discontent, conjuring unflattering comparisons to the player rancor that ended his previous managerial stops with the Astros and Angels.

Said one Met: “We were all miserable.”

Thanks Santa Marc! We’re all miserable too. Now let’s all head to the dinner table for our plates of Goya Nachos to throw at each other until a sharp corner or a congealed piece of guacamole takes an eye out and we all go to the Hospital for Special Surgery!!! Then we’ll exchange Dysfunction Day gifts at the hospital! It’s all per tradition. Look Jimmy, I made you a charm bracelet with all of Noah Syndergaard’s old bone spurs. It’s just what you wanted, and it was only given out to the first 15,000 fans! And Peggy, I made you an origami rabbit out of an old Jeff Wilpon court deposition. You can even pin it to your Roberto Alomar jersey like a corsage!

And what’s this? Anna Benson’s old Mrs. Claus outfit??? You shouldn’t have! I’ll use it to hang myself. A Merry Dysfunction Day to all, and to all … don’t forget to renew your season tickets. Because the Mets will make all this Dysfunction go away by hiring a fan favorite from the 90’s to make everybody forget that the Grinches still own the team.

In other words: Denial Day.