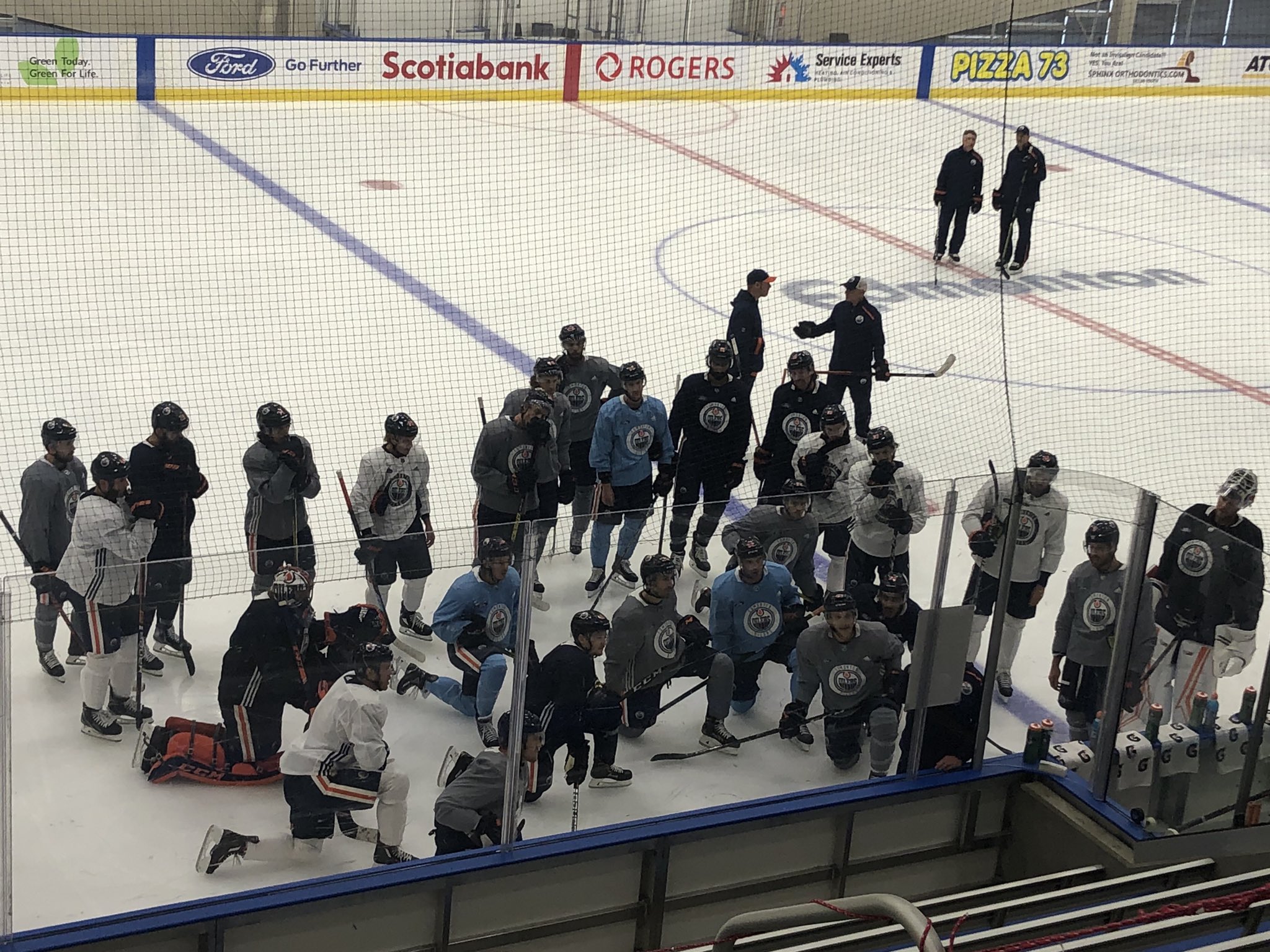 The Edmonton Oilers are officially in the home stretch of their 2020 ‘Return to Play’ camp. The club will scrimmage on Saturday afternoon and then enter the bubble on Sunday with the eleven other Western Conference playoff teams.

Here are some of the latest notes from Edmonton Oilers camp, which took place this afternoon at the Downtown Community Arena.

The Oilers took to the ice shortly after 8:00 pm MT on Wednesday night to take part in a simulated game. Team Blue absolutely crushed Team White by a final score of 7-2. The game also featured artificial crowd noise to simulate what the club will deal with during the 2020 Stanley Cup Playoffs.

Alex Chiasson scored a pair for Team Blue, while Ethan Bear, Ryan Nugent-Hopkins, Tyler Benson and Cooper Marody also found the back of the net. Leon Draisaitl and Andreas Athanasiou had the goals for Team White.

“I think we’re trying to make it as normal as we can considering the circumstances,” Chiasson said postgame. “I thought today was a step in the right direction to get your mind ready. Tonight was nice to get back to the routine a little bit.”

The Oilers will play two games at 8:30 pm MT, Games 2 and 3 against the Chicago Blackhawks on August 3rd and 5th.

A new division rival was born on Thursday. The NHL’s 32nd team officially announced it’s identity and jerseys. The Seattle Kraken will join the NHL for the 2021-22 season, and will play out of the Pacific Division.

Oilers head coach Dave Tippett worked for the expansion franchise prior to coming to Edmonton last spring. It was a day that, even from afar, he could take pride in.

“I think it’s going to be an incredible franchise,” Tippett, who was featured in the club’s hype video on Thursday, said. “I love the logo. The jerseys are great-looking jerseys. I’m happy for the people in Seattle. They’ve got a brand and now they can continue to push that franchise ahead.”

“For the community of Seattle having an NHL team, I think it’s going to be awesome,” Yamamoto said after practice. “A lot of kids in that area are going to look up to those guys and hopefully push themselves to get there one day. It’s huge for the community.”

On Thursday, McDavid was out on the ice for practice. Crisis averted, it would seem.

If that wasn’t enough, Darnell Nurse provided fans with a scare on Thursday. Nurse went down awkwardly when battling with what appeared to be Kailer Yamamoto behind the net.

Nurse skated slowly back to the bench and went off the ice in obvious pain.

Kailer Yamamoto, Tyler Ennis, Andreas Athanasiou, Ethan Bear and Darnell Nurse were on the second powerplay unit. Chiasson, as has been the case in recent days, was also working his way into the rotation.

Meanwhile, the Chicago Blackhawks are now starting to face the reality of life without Corey Crawford. The veteran goaltender still has yet to be seen in Chicago for Phase 3. Time is running out for his return.

Veteran center and captain Jonathan Toews discussed that on Thursday.

“What can you do? It is what it is,” Toews told reporters. He did mention that there’s confidence in Malcolm Subban and Collin Delia, but also said that Crawford has shown a knack for jumping right in with little preparation without missing a beat.

We should know more when the Hawks travel to Edmonton on Sunday. If Crawford isn’t there, well, we’ll have our answer.