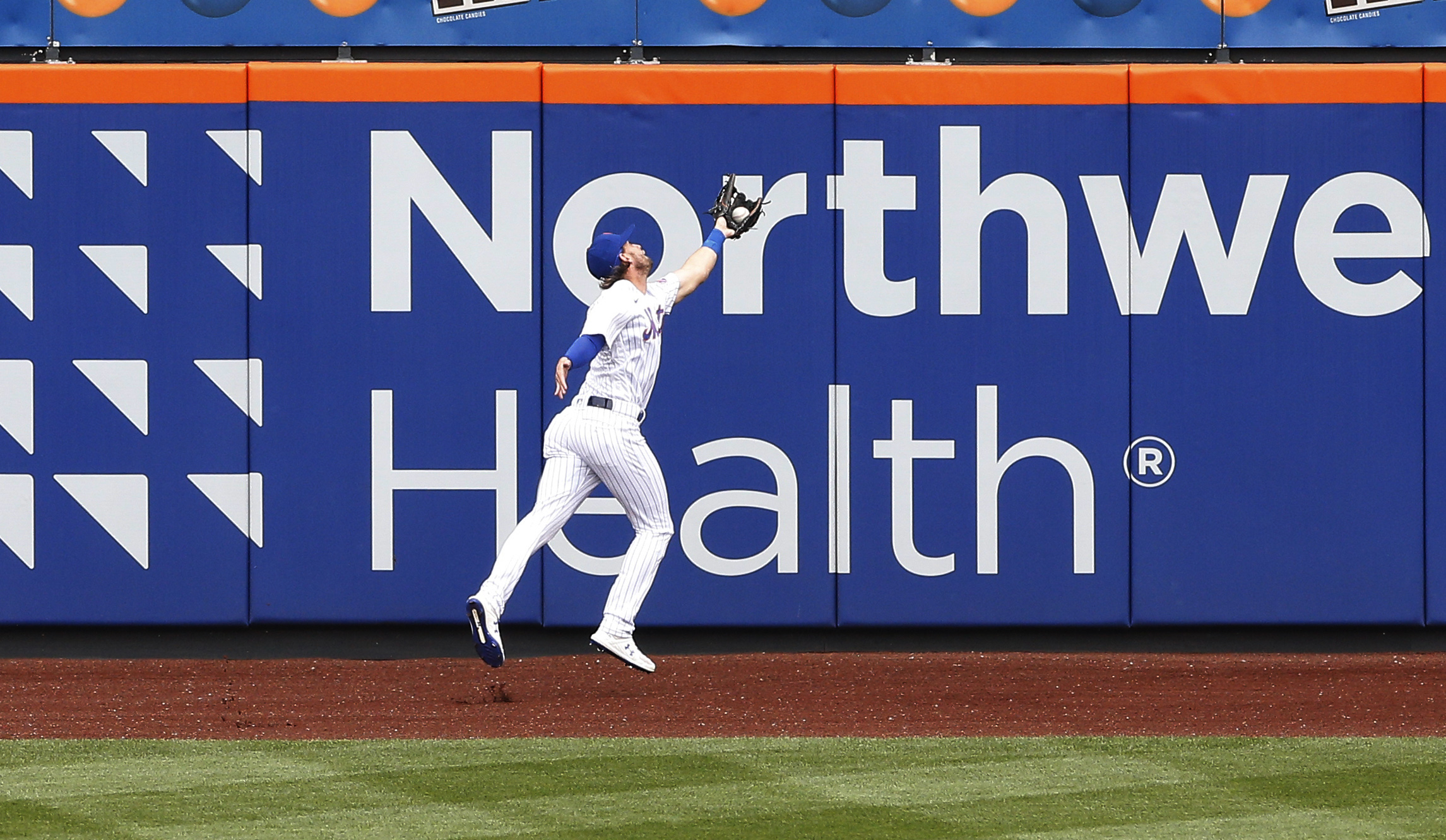 There was a lot to digest in this game.

First, I want Jeff McNeil in an alley fight with me. David Peterson is having loads of problems in the first inning, got lucky on a strikeout of Juan Soto (ball was low and outside, but more on this later), and gives up a run on a ground out back to him by Kendrick (Turner, who got on with a leadoff walk, scored … so don’t walk the leadoff guy). So now Asdrubal Cabrera comes up with runners on second and third and sends a screamer into the gap. Jeff McNeil (sports phrase alert) gets on his horse and hauls it in at full speed, a half step before he hits the wall, going down in a heap but holding on to the ball to end the inning, and effectively turn the game around.

My cries of “please get up” barely went from sarcastic to sincere before it was apparent that McNeil wasn’t going to get up … at least at full capacity. So out comes the cart and like snow caps on the mountain range in the summertime, he’s gone. But thankfully:

Jeff McNeil has a bone contusion (bruise) in his left knee. He's day-to-day.

Much, much better than broken kneecap or torn ankle ligaments or PCL laxity (shout out to Jed Lowrie.)

Then with the score 1-1 after a Dom Smith home run, Pete Alonso is up with the bases loaded in the bottom of the third. He takes a 2-2 pitch low for a ball, which was the correct call. But after Soto struck out in the first on a pitch that was pretty clearly low and away, the Nationals were pissed and rightly so. I mean, it was so bad that Stephen Strasburg got ejected from the cheap seats!

So now Austin Voth throws the exact same pitch but on the other side of the plate. Alonso, clearly thinking “well it’s a ball because it was a ball 30 seconds ago”, takes the pitch and gets rung up. I’m telling you, bring on the robot umps already.

5 got Stephen Strasburg ejected from the stands

6 got Pete Alonso called out on strikes pic.twitter.com/YR4NKEC4ja

So now leading off the next inning, Juan Soto gets hit in the back. I’m not about to read David Peterson’s mind here, but Soto has killed the Mets in this series, in his career, and his life. Peterson, or any Mets pitcher, has to pitch him inside. Not hit him in the back, but if he’s pitching him inside and misses, there’s nothing wrong with that. For heaven’s sake, Peterson threw 44 strikes out of 74 pitches, so it isn’t as if he’s Greg Maddux out there. But the umps got together and decided that somebody’s ass was in the jackpot and warned both benches. I mean, come on now. Besides, it isn’t as if hitting him helps, he hit a home run later in the game.

The good news is that when Soto did hit that home run, it was 7-2, because Tomas Nido hit two home runs including a grand slam to drive in six runs and blow the game open. Yes, you read that right. Tomas Nido hit two home runs, and one of them was a grand slam. Whatever the clubhouse did to Wilson Ramos’ bats, it apparently spilled over into Nido’s locker. Whatever the case, one Edwin Diaz appearance and one ninth inning scare later (fooled ya, Diaz actually pitched in the 8th and looked good), the Mets came away with an 8-2 victory, and a great bounce back from having their guts ripped out for two games. Now to Philadelphia, where the Mets have played pretty well recently, and will have Jacob deGrom and Rick Porcello face the Phillies’ new twin pitching sensations named “TBD”. If the Mets can survive Matz at the Bank on Saturday against Aaron Nola, then they could be off to the races.

(But the last time I said something like that they lost 16-4 so maybe don’t listen to me.)