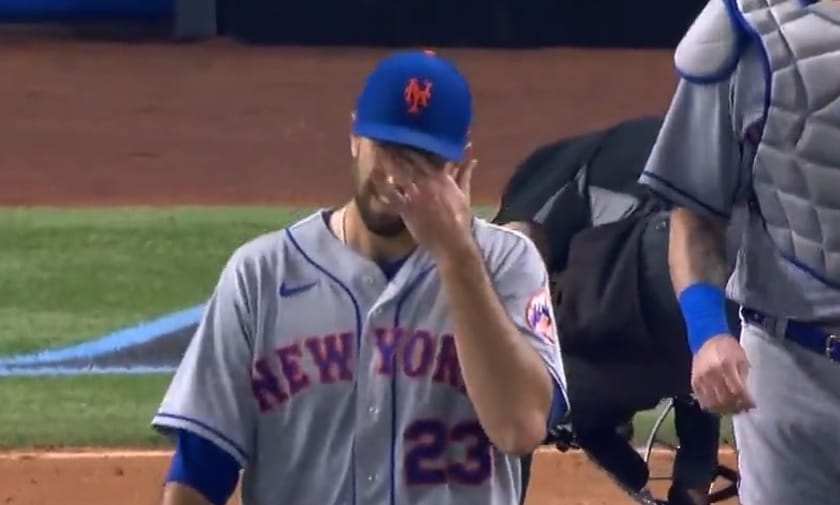 When Pete Alonso blasted a two run HR to make the score 4-3 in the 6th, I thought the Mets had it in the bag. They had started slow as David Peterson got touched up for three runs in 3 and 2/3’s innings after Ronnie noted that Peterson had never lost to the Marlins (as if Jerry Seinfeld didn’t have enough scapegoats.) But they were hititng the ball hard and were putting pressure on the Marlins all game. The Alonso home run felt like he was coming back to being the MVP candidate he was earlier in the season. Certainly in the 7th as the Mets loaded the bases on singles by Eduardo Escobar and Tomas Nido and a walk to Brandon Nimmo, they were ready to overtake the Marlins.

But Francisco Lindor, who was 3 for 7 in his career off new Marlins pitcher Steven Okert, scorched a ball right to the third baseman for a 5-4-3 double play to end the inning. For all the complaining that other teams have done about soft contact, I long for it like Apple TV longs for a useless stat to put on the bottom right of the screen. And for good measure, Mark Canha ended the eighth inning with a runner on first by hammering a ball right to the shortstop. It felt like the end, and for the first time this season, it felt a little bit like 2007. Not the “collapse” part, but just the dread of a divisional race slipping away.

What happened in the 9th didn’t wind up making a difference in whether the Mets won or lost from a technical standpoint. But Buck put in Joely Rodriguez to start the 9th down by a run. When Edwin Diaz backed him up in the bullpen, I wondered why he wasn’t just brought in to start the inning. You’re down by a run, Diaz hasn’t pitched in close to a week, and you’re at the point where you need just about every game with the way the Braves are playing. Rodriguez wound up giving up two runs on a Charles Leblanc homer to put the game out of reach from a team that had been battling up until that point, and then Diaz came in anyway.

When it was May and June, I appreciated Buck giving everyone a good look in different spots and seeing what he had. But we’re long past that point now. He should know what he has in Rodriguez, and he should know that it’s not good. There are others who are going to become bullpen pieces. Tylor Megill is adapting to his new relief role very well in the minors, and God willing Max Scherzer is going to get healthy soon and David Peterson is going to take on that role. Someone is going to be the odd man out and clearly it’s going to be Rodriguez. And if it’s that clear that it’s going to be him, then you can’t put him into one run deficits in the 9th inning anymore. The “seeing what you have” phase should be over and if Buck doesn’t know what he has by now, then it’s on him.

How many fucking Mets seasons in my life are going to be ruined by shit that’s never happened before in baseball history? The Mets are gonna win 100 but the Braves haven’t lost in 3 months. Why the fuck does this always happen to us?

It would indeed be the end of not only the game, but of the Mets hold on first place which they have had at least a share of for 153 days as the Braves defeated the Mariners in Seattle. It was always how the Mets were going to have first place taken from them. Travis d’Arnaud hits a homer over the soundtrack of Hunter Pence making dick jokes on Apple TV.