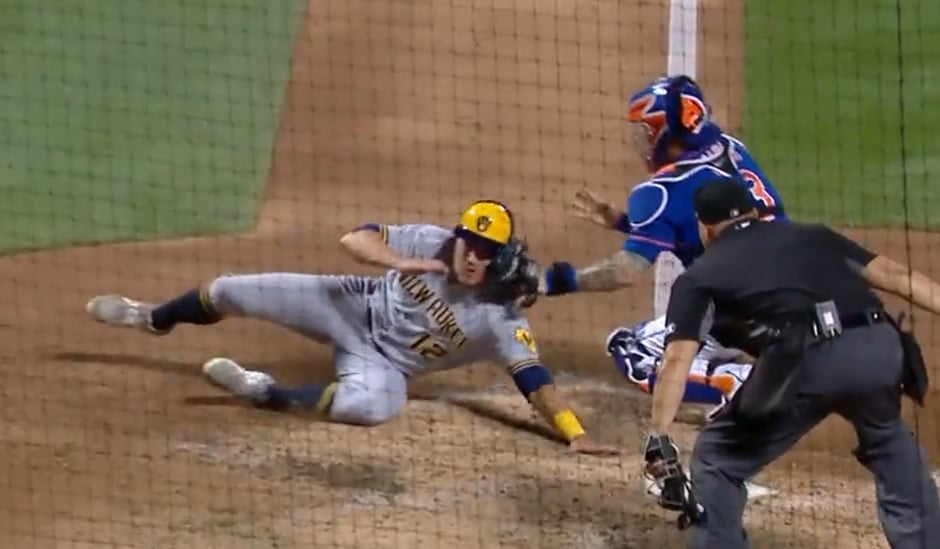 This should really be two different posts. (That’s probably how this site would like it, right? More clicks and such.) Because the 5-4 win over the Brewers was scintillating. They came back from 4-1 down thanks in part to a game tying two run dinger by Mark Canha. Then in the eighth came the intersection of two high school friends that gamed the system in the name of Major League careers:

This may be one of my favorite stories of all-time. JD Davis and Rowdy Tellez: Future Farmers of America.

Whatever it takes to play baseball, right? pic.twitter.com/Xuc0zoJBkR

Davis, in the name of Bacon and Pig, singled to start the 8th with the score tied at four. Then on the next play, it was the other farmer who threw the Mets a bone by throwing Luis Guillorme’s grounder into center field to put runners on first and third. Davis’ pinch runner (Starling Marte who on this night could only run) scored on Tellez’s throw to second base on Nick Plummer’s grounder. The Mets now had a 5-4 lead thanks to one farmer bearing fruit and the other one providing the fertilizer.

Then came the ninth, and the trumpets. Edwin Diaz got touched up by a Hunter Renfroe single on Diaz’s 4th straight slider. Then after Jace Peterson struck out, Tyrone Taylor got more soft contact and looped a double to short right to set up second and third with one man out and Christian Yelich at the plate. The only thing that could save us would be for the ghost of Gary DiSarcina to take over Brewers’ third base coach Jason Lane and set off a chain of events which would see Renfroe tagged in the face for the second out.

PLUMMER TO PETE TO NIDO FOR THE OUT! pic.twitter.com/2nLvJn6JRW

Diaz struck out Yelich and, thanks to Lane’s gift, that was your ballgame. Another great victory for the Mets, right? Of course. But there’s a dark undercurrent that was present tonight. Tylor Megill left the game in the fourth inning after throwing a pitch to Omar Narvaez with the score 2-1. The team said it was shoulder discomfort, and that has me worried especially after he had just come back from an issue with biceps tendinitis, and now this. Megill said that the injury died down a bit, but of course it would die down after not throwing any more. Now I’m not a doctor by any means, but when one arm injury follows another one, I always think of overcompensation having something to do with it. It’w why the Mets have been extra careful with Jacob deGrom. Forearms are attached to elbows and biceps are attached to shoulders. It’s science, and the Mets have had enough Frankensteins over the past few seasons to not be extra concerned.

And before the game, Eduardo Escobar was ruled out for the game with a “non-workplace event“. That means only one thing to me: “real life”. And when real life gets involved, shit gets scary. I’m hoping it only means that he thought he left the oven on or something, but it’s probably a little worse than that and first and foremost, the health and safety of Escobar and his family are paramount. While Thursday’s victory was another feather in the Mets’ ever expanding cap, having Escobar and Megill happy and healthy are what matters most tonight.