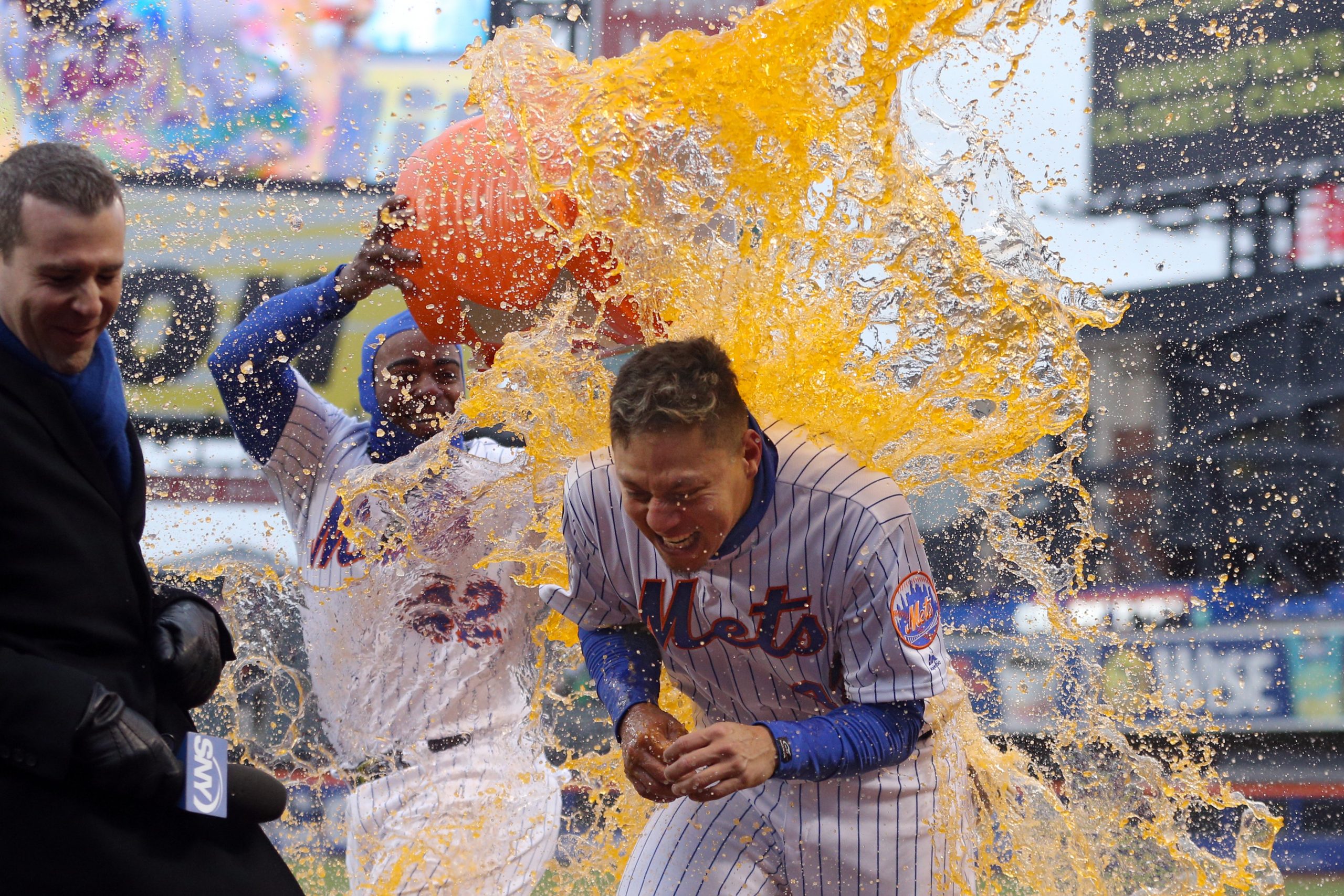 Before the season, I predicted the Mets would be a .500 team and their most important player would be Yoenis Cespedes. Nailed it!  Well, not so far, but who’s complaining when the Mets have the best record in the National League?  Sure, it’s still very early, but the Mets have already opened up a six-game lead over the Nationals.  If the Mets sweep the Nats in the three-game series starting tonight, Washington will find themselves nine games out. That’s a nice lead any time of the year.

The Mets are doing so well with little help from Cespedes (shown above dousing Wilmer Flores after Flores’ walk-off homer Sunday).  While he does lead the team with 12 RBI and has also hit 3 homers, Yoenis is also hitting .190 with 26 strikeouts.  We’ve heard a lot about Giancarlo Stanton’s poor start with the Yankees. Cespedes has similar numbers:

But it’s not the hitting that’s put the Mets in first. The team is tenth in the NL in runs scored and is hitting just .233. Yet again with this franchise, it’s the pitching.

The Mets’ 2.58 team ERA leads MLB by a good margin. Houston is next at 2.74, followed by Boston at 2.94. Then comes San Diego at 3.08, meaning the Mets have a team ERA a full half a run better than anyone else in the NL. The starters have been great and the relievers have been great.

And the Mets are doing all this with both their main starter acquisition and main bullpen acquisition on the disabled list.  As of now, Jason Vargas and Anthony Swarzak have hardly been missed. But it’s good to know that they will eventually be back.  The Mets finally have depth, both in the lineup and on the mound.

Along with depth, the Mets are not letting nostalgia cloud their lineup decisions. We all love David Wright, but the Mets stopped pretending he was coming back and signed third baseman Todd Frazier to a two-year deal. Jose Reyes was brought back as a backup. He’s off to a dismal start, but he’s a backup. And for what it’s worth, Reyes hit .215 in the first half last season and .288 after the break. (Though if the 2018 Mets continue to look like a contender, Reyes may not survive another lousy first half.)

The worst thing so far is that the Mets have lost both their catchers, with Travis d’Arnaud out for the season and Kevin Plawecki out for 3 to 4 weeks. Nothing good about that, but, frankly, it’s not as if these two have shown themselves to be irreplaceable. Maybe Jose Lobaton or Tomas Nido will turn to be a pleasant surprise. Or maybe the Mets will spend money to go out and get a better catcher.

So far, so good for the Mets. Now all we need is some better weather!