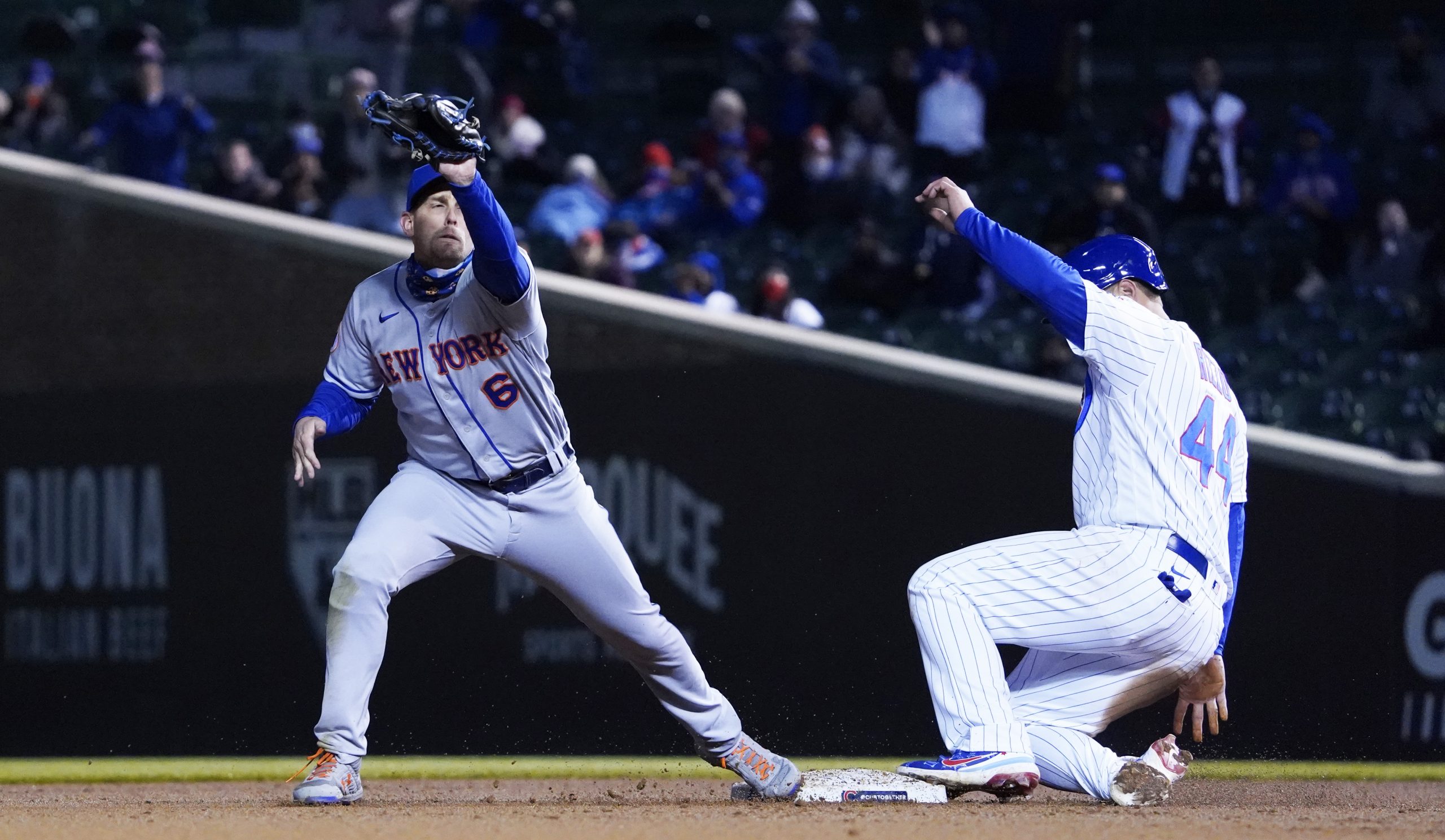 It was all going so well. Francisco Lindor had hit his first home run as a Met, David Peterson had a no-hitter going in the fourth, and this was shaping up to be a strong bounce back from Tuesday night’s loss.

Little did we know …

Let’s start in the fourth as Peterson is humming with a 2-0 lead. He strikes out Ian Happ to start the inning but then gives up singles to Willson Contreras, Kris Bryant, and Anthony Rizzo to make the score 2-1. But Javy Baez grounds one to third for an easy double play to end the inning. Okay good. We’re okay.

We’re not okay. Davis boots it for his third error in two nights (but hey, it wasn’t a throwing error!) to load the bases. Then Peterson walks Matt Duffy to tie the game, and David Bote blooped a single to right to score two runs, with the other two runners moving up a base because of a throwing error by Michael Conforto. Peterson, who started the inning with a no-hitter intact, wasn’t even around for the end of the inning.

Then Robert Gsellman, who wasn’t worthy of pitching at any point in the first 12 games of the season, is now pitching in his third game in the last four. He gives up an RBI groundout to Jake Marisnick and a hard single to Eric Sogard to make it 6-2. Then Gsellman gets a groundball by Happ to Lindor to end the inning, and don’t worry, it did end the inning … eventually. But not before Lindor threw the ball to Lemont to allow a run to score before Happ was thrown out rounding first. So they did get Happ, but crissakes it’s 7-2.

Top of the 5th, and Pete Alonso does this:

Pete Alonso hits one to the moon and the Mets are within 3 pic.twitter.com/BYRrwhUf9I

So after all that nonsense in the fourth, it’s a 7-4 game, and it’s still winnable. But the bottom of the fifth comes, Gsellman is still in the game, and the first batter hits one up the middle. Lindor and Jeff McNeil do their best Tanner Boyle/Jamie Escobedo impression and let the ball go through for a hit, and Contreras hustled to second on the play.

Okay, let’s stop here and recap the hilarity up until this point:

The Mets just keep hurting themselves in the field. This reel is from the last two innings alone… pic.twitter.com/xZyjC90hmw

The fourth inning? Look, things happen. Bad innings happen. Physical errors are a part of the game and sometimes you go out there and look like the Big Apple Circus. It’s a long season. I get it. But after you get the home run by Alonso and you’re still within striking distance, you absolutely cannot start the very next inning with a vapor lock like that. Your momentum is out the window and the air is out of the balloon.

So after the Contreras … whatever the heck that was, I mean it was officially a double but come on now … Gsellman walked Kris Bryant. Now, at this point you have Trevor Hildenberger and Miguel Castro warming up, Castro hasn’t pitched in eight days so it’s not ideal to put him in with runners on base, but he’s one of your better arms and given a choice between him, Hildenberger, or sticking with Gsellman, you absolutely have to take a shot and bring in Castro in that spot. But then you see Jeremy Hefner stroll out to the mound instead of Rojas and now you’re thinking “damn, he’s really going to leave Gsellman in there.”

Gsellman got Rizzo to fly out, but then Baez reached first on catchers interference (as if this game wasn’t weird enough for you.) Bases loaded and Matt Duffy up, of course Gsellman gives up a rope up the middle to score two runs, make it 9-4, and pretty much end the proceedings right there. And if terrible defense, failed pitching, and questionable managerial decisions weren’t enough, a sprinkle of bad luck was added as the hard hit ball by Duffy hit Gsellman in the leg whereas if it had avoided him, McNeil was played perfectly for the double play. Now, would McNeil have booted it or thrown it to Minnesota? The way the night was going, possibly. But freakin’ dammit to hell.

Now seriously, Robert Gsellman goes from the 25th man on the roster who can’t be trusted with a 10 run lead or deficit, to your workhorse? You can’t bring in Castro at 7-4 but you can bring him in at 14-4 because you can’t get him into a ballgame in eight days? Is there an industrial strength freezer that I can stick my head in? Was Wrigley Field cold enough that I really don’t need one?

The epilogue to this is that the final score was 16-4, Baez hit a grand slam, Steve Gelbs is doing reports on how Jeff McNeil has an allowance of eight dogs, and even Gary Cohen made an error as he waxed poetic about how it was a brand new day before realizing that it was only 11:00. Look, if everyone else can make errors, Gare can too. The highlight of the night was Luis Guillorme grinding out an 8 pitch at-bat down by 12 runs in the ninth inning as the last out. Seriously, I love that guy.

Okay, I got it all out of my system. Thursday is a new day. Maybe J.D. will spend Thursday afternoon playing XBox with Gsellman in the clubhouse to heal his soul. Maybe Joey Lucchesi will give the Mets a little length and the Cubs will forget how to hit again. Maybe baseballs will be caught and thrown to bases accurately. It’s all possible if you believe in the righteousness and the compassion of the baseball gods, and if you believe that two losses in a row won’t turn into 20. Breathe, Metstradamus, breathe. They’re still in first place … at 7-6.