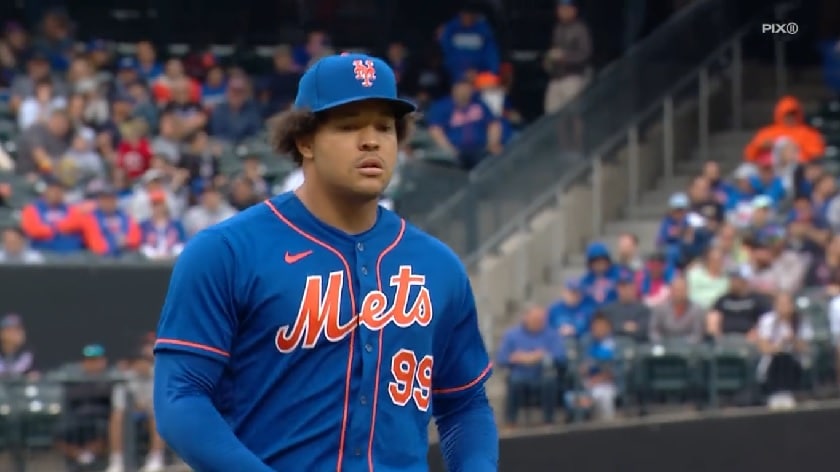 Yesterday, Taijuan Walker stopped into the team store and picked up the tab for all of the Pride Day merchandise that was bought before the game. Saturday was a little bit of good karma coming back his way.

Walker threw 6 and 2/3’s scoreless innings including 18 straight Marlins after Jon Berti’s leadoff hit in the first. He also struck out guys left and right … nine total on the day. I don’t know if he is one of the pitchers who is benefitting from the return of Max Scherzer. I don’t know if it’s Walker using his splitter more. I don’t know if this is simply good karma. Maybe it’s all three. All I know is that with the starting staff in the state of health that it’s in, performances like Walker’s are sorely needed. Considering some of the injury issues Walker has had to start the season, his performances have been a boon to the Mets.

The Mets got all they needed offensively early in the game. Jeff McNeil’s two out single in the second off Braxton Garrett scored Mark Canha and gave the Mets a 1-0 lead. Then in the third, Francisco Lindor’s mom kept providing inspiration as young Francisco hit his second home run in two days: A two run shot for a 3-0 lead. Walker held things from there until the 7th when Avisail Garcia’s double brought home the Marlins’ only run. But Drew Smith came in and battled Lewin Diaz on a 9 pitch at-bat to end that threat, and then pitched a clean 8th to set things up for Blaster Jaxx and Timmy Trumpet.

Edwin Diaz gave up a run because Jon Berti is a pain in the butt, but he struck out the side to seal the deal. The Mets are now 21 games over .500, and they’re at 9-6 in the 24 game stretch from the beginning of the Dodger series until the end of June. (I think I had originally counted 22 in a previous version of this blog, so forgive me.) Three wins in the next nine games will give them the .500 record that I was hoping for. Anything over that is gravy, and it seems like there will be some heaping servings of gravy before Max comes back. Is Max ready for some gravy?

I think Scherzer has been hanging out with Pete too much 🤪 pic.twitter.com/ZFAmzlApzk

Not really hate, per say. But I want to look at Edwin Diaz’s first strike out of the 9th today. You probably already know that it was memorable.

Jazz Chisholm was NOT happy with this called third strike

So first off, that pitch was a ball.

Second, that umpire seemed to think about it a bit before ringing him up. I think Diaz’s reputation this year gave Edwin that call.

Third, next time Jazz should stick out his elbow. We have data that proves that it works.

Fourth, I thought Gare was right: The Marlins (meaning: Don Mattingly) took a long time to go out on the field to protect him. Remember that there was a team meeting last week that lasted 90 minutes and reportedly, Chisholm and his “flair” were the subjects. So did one have anything to do with the other? Did the Marlins hang Chisholm out to dry a little longer because there is still a little bit of friction?

The answer, most likely, is that they probably thought Chisholm would walk away at some point and didn’t want to make it a thing until it was a thing. Mattingly probably should have gone out there sooner simply because the call was pretty terrible and he had to have thought that Chisholm, who has never been ejected until today, would be extra angry about it because he was clearly right. I don’t know what the true answer is but I’d be willing to bet that there was smoke but no real fire on this one.

But I will say this: If the Miami Marlins were the New York Mets, and all of the above happened here? Sweet Jesus we would all probably want to ring Sal Licata’s neck right now. All of the “hot takes” and the declarations from the rooftops from the talking heads would have just been unbearable. Young Jazz should be thankful, as am I, that this has all happened under the relatively quiet sports umbrella of Miami, where their sports coverage probably goes in this order: Heat, Dolphins, Miami FC, David Beckham, local Jai Alai, whatever drink Alonzo Mourning has created in a South Beach bar, and then the Marlins fall around 15th, just ahead of the Florida Panthers.