Have A Laugh, And A Good Night’s Sleep (And Maybe A Beer Or Two) 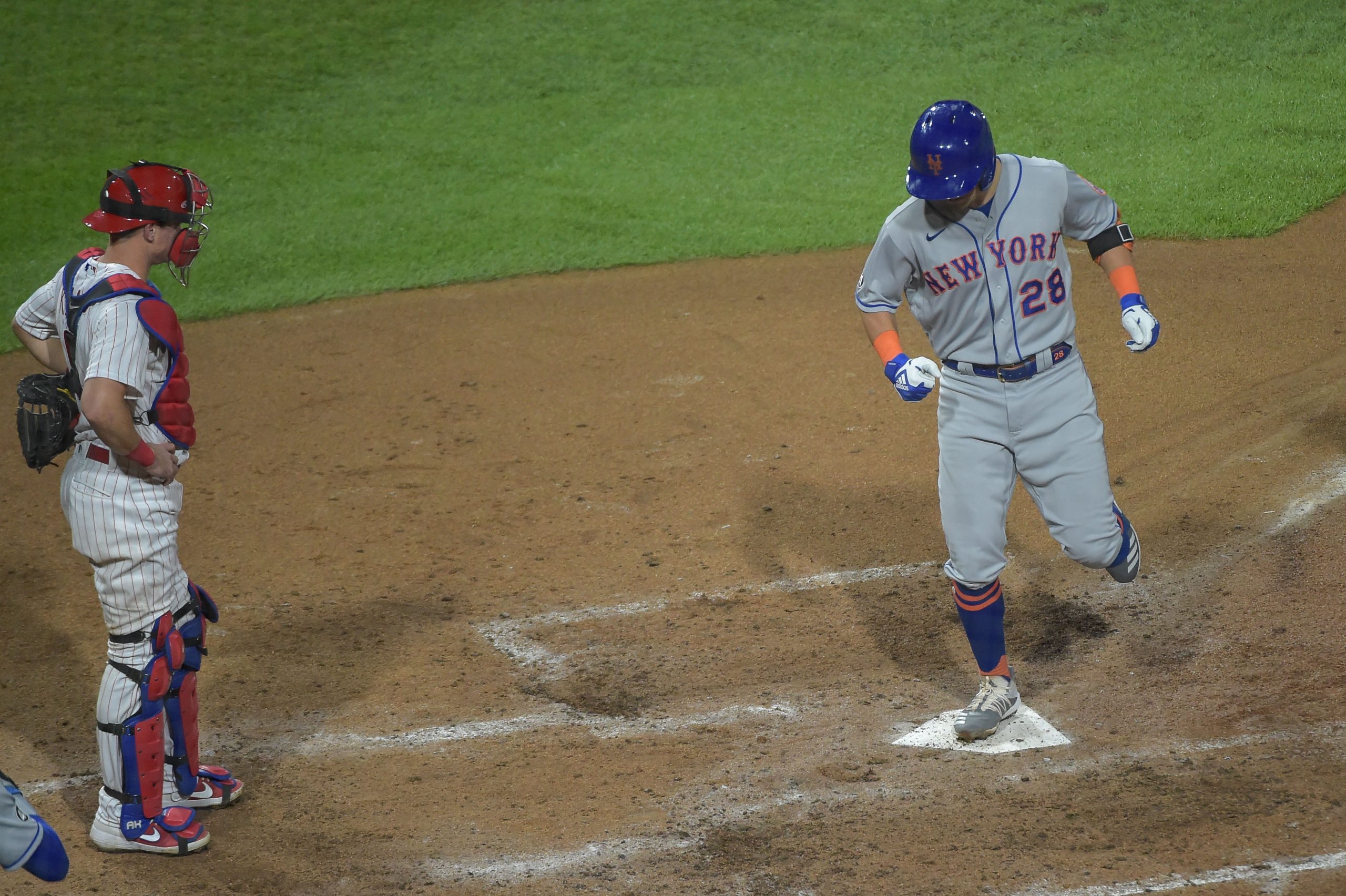 The frustration that I felt last night, I imagine the players on the roster are feeling it too. And when Jacob deGrom left the game after two innings and down 3-0 with a hamstring spasm, it would have been easy to roll over and die. When Michael Wacha gave up a home run to Jean Segura to make it 4-0, the rotation seemed halfway complete. Quite honestly, I wouldn’t have held it against them if they completed the 360 at that point.

The Mets got on the board in the 4th on a groundout, and then J.D. Davis hit a two run HR off Zach Wheeler in the 6th to make it 4-3. Admittedly, I was waiting to see how painful this comeback was going to be. When Davis doubled home the tying run in the 8th to bring home Conforto, I was waiting for the other shoe (which was almost on that very play as Conforto for some reason was jogging on contact even though it was two outs.)

I expected Miguel Castro to serve up the snacks in the 8th. He sure as hell made it interesting as Segura led off the inning with an oppo base hit off Castro’s slider. But Castro’s volatile stuff sent down Scott Kingery and Roman Quinn to end the inning and it felt like we got away with something.

It really felt like getting away with something in the ninth when, with a runner on first and one out, Hector Neris inexplicably dropped the ball to send pinch runner Amed Rosario to second base. It set in motion a chain of events where the Phillies wound up walking Jeff McNeil intentionally to bring up Andres Gimenez while thinking of the double play, and probably thinking that some rookie wasn’t going to beat them. Well, some rookie got a solid base hit to give the Mets a 5-4 lead. It could have been more, but the Mets decided to try to out-vapor lock the Phillies by running into a strike ’em out throw ’em out double play as Gimenez was caught on the back end of a double steal leading to McNeil getting tagged between third and home for the final out of the inning.

So here comes Edwin Diaz against the top of the Phillies order, with Met-killer Segura coming up fifth if it gets that far. Now I’m not going to get taken in by the tease, as I’ve said last night. But I really feel bad for everyone in that locker room. Wilson Ramos is talking, for the second time this season, about the mental rigors of struggling during a pandemic season filled with not being with your family. So when the ninth started, I didn’t care about the playoffs. I just wanted this team to have a night where they can laugh a little and have a good night’s sleep. I feel like that’s anything we can ask for at this point from ourselves, much less our baseball team. I begged of Edwin: Just give us this one.

That’s when my mind went to a weird game from the past. If you’re old enough, you might remember this. It happened on August 30th, 1992. The season was a disaster. A book was written about it, that’s how bad the season was. (Little did we know, it would get worse in 1993. But that’s another post for another time.) The Mets hosted the Cincinnati Reds at Shea Stadium, and were down 3-1 going to the bottom of the ninth. Rob Dibble struck out Daryl Boston, then walked Chris Donnels. He struck out Jeff Kent, then walked Eddie Murray. That brought up Bobby Bonilla.

Bobby Bonilla was the big free agent prize in the winter of 1991-92, but the season didn’t exactly go as planned. His OPS was a pedestrian .802 going into that game, which found the Mets at 59-67. So at that moment, while sitting in the orange seats with the realization and resignation that the 1992 season was toast, I was thinking “Bobby, just give us this one moment … this might be the last game I attend this year, so just give me one good memory from 1992.”

Bonilla cracked a screaming liner over the right field wall for a 4-3 win. I remember being delirious. You might remember Dibble ripping off his 1962 throwback jersey in disgust before he got to the dugout. But I got what I needed from 1992. Now, I just wanted Edwin Diaz to secure one final moment for 2020. Not even for me, because I’m resigned. But I wanted it for everyone in that dugout. I just wanted them to have a laugh, a beer, and a good night’s sleep.

Diaz struck out Andrew McCutchen and Bryce Harper for the first two outs before giving up a single to Alec Bohm to bring up Didi Gregorius, but more importantly, to put Jean Segura on deck. If Didi got on base, there would be no laughs, or beer, or rest. I was convinced. But thankfully Diaz, without the best of control, struck out Gregorius to end it and give the Mets a 5-4 win. The team should be proud of themselves. After deGrom left the game and most likely left behind dreams of a third consecutive Cy Young award behind, the team had to be distraught. If they had rolled over, I wouldn’t have even been mad. If they fought back only to have their souls crushed, I don’t think I would have had the energy to throw something across the room. It would have been so easy.

But the team didn’t do that. They fought hard and never gave up. Even if it’s our final lasting moment of this 2020 debacle, it’s enough for me.

Somebody named Barry Jones was the winning pitcher for the Mets.

Why do I have no recollection of Barry Jones? I kept thinking Bobby Jones, but 1992 was a little bit too early for him. Barry Jones? He had a 9.39 ERA in 1992 and I don’t even remember being pissed at him.

Is my mind finally going on me?