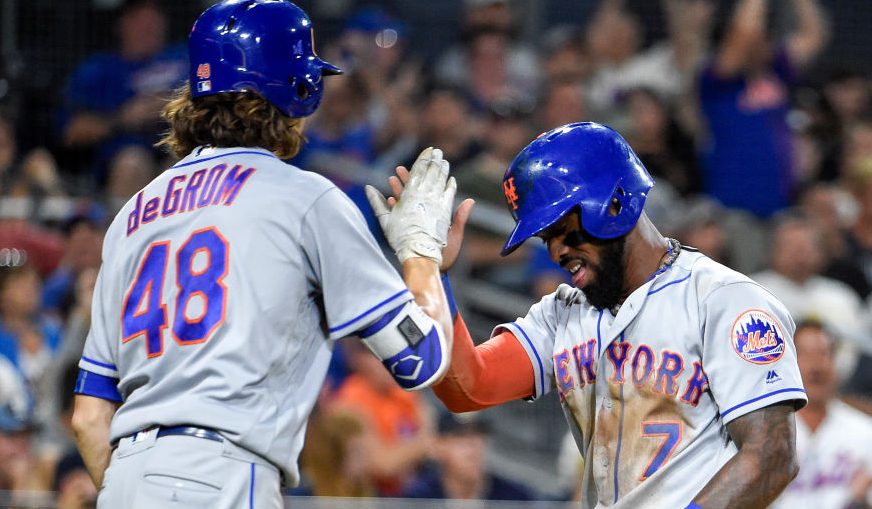 Zack Wheeler hit the disabled list for the second time in about a month, this time with a “stress reaction“, which sounds like the Mets ran out of terms to describe injuries so they picked one slip of paper out of one hat and a second slip of paper out of a second hat and came away with “stress reaction”. It also sounds like what I have had in multiples watching this team play baseball this season.

People react to stress in different ways. Here’s Yoenis Cespedes’ reaction to stress, which is to say “screw it, I’ll pitch if you need me to!”

With all the problems that the Mets pitching staff has had on the whole, and the star-crossed season that Cespedes has had, I feel that Cespedes pitching for the Mets at some point in September is the only way this stupid season can end. All aspects of chaos cancelling each other out to become everything and nothing.

Jacob deGrom reacts to stress the way he usually does: pitch eight strong innings. deGrom’s only real hitch was the home run that Hunter Renfroe hit on top of the warehouse in the seventh, and he responded to that by striking out the side. He’s quietly putting together one of those seasons that you can argue is more impressive because it’s on a below average team than on a good one. Consider: If you take out the two starts in the middle of the season when he couldn’t reach five innings against Milwaukee and Texas, deGrom has an ERA of 2.43 and a WHIP of 1.04. That stands up very well to his best season where he had an ERA of 2.54 and a WHIP of 0.98. I mean … no wonder the Astros want him. I mean, trading him at this point would be like trading Tom Seaver in his prime. Who would do that?

This was the game that the Mets had to win, with deGrom on the hill and Clayton Richard taking the bullet for San Diego with three Padres relievers on their way to becoming knighted as Royals relievers. The Mets took heed as Wilmer Flores hit a dinger in the second (you might have heard he loves lefties), Cespedes drove in a run with a triple and Jay Bruce drove him home with a single in the third, then singles by Bruce in the fifth and Travis d’Arnaud in the eighth gave the Mets five runs. The last of the runs was helped out by Jose Reyes’ 500th career stolen base (he’d have 501 by the end of the night as he literally stole second base and brought it to the clubhouse with him.) A 5-2 lead should have been enough for Addison Reed. It almost wasn’t.

The trade that sent the Padres relievers to Kansas City indirectly affects the Mets’ plans with Reed a bit, as the Royals were one of those teams that needed bullpen help. (I’ve heard for years from a Royals follower about how much Joakim Soria gives the fan base nightmares.) But the Royals acquiring Ryan Buchter, Brandon Maurer and Trevor Cahill not forced Richard to go eight innings tonight, but it took away a potential suitor for Reed. So Addison came into the game with a three run lead to show Kansas City what they missed out on.

What they missed out on was an experience similar to what we had when Frankie Rodriguez was here. Reed gave up a dinger to Renfroe, then a couple of base hits before Jabari Blash tried to tuck one into the right field corner that went two inches foul (and looked fair on one of the camera angles.) It was quickly turning into one of those games that would cause one to bang their head against the wall. So how did Reed react to that stress? He struck out Blash and then got Matt Szczur to line out to Bruce for the final out of a way too uncomfortable 5-3 win. It’s deGrom’s eighth win in a row, and it was Reed’s 17th … um, “save”. But a save is a save, and that outing probably only cost the Mets a low level prospect in a potential trade. No big deal.

In all seriousness, with the trade deadline clock ticking, the Mets seem to be preparing to bring a seat filler in as a potential short term replacement for Reed, as they signed former National Jonathan Albaladejo from the Bridgeport Bluefish to a minor league deal. It’ll probably be an Aaron Harang type deal where he comes in to replace Reed as the Mets may not have a pitcher close enough to ready to expose him to major leagues and put him on the 40-man roster. So in comes Albaladejo to remind us all that Tyler Clippard kicked the Mets’ butts as a National because the Yankees were stupid enough to trade Clippard for Albaladejo. Even their bad trades kill us. Let’s hope the inevitable trade that involves Reed won’t do the same.