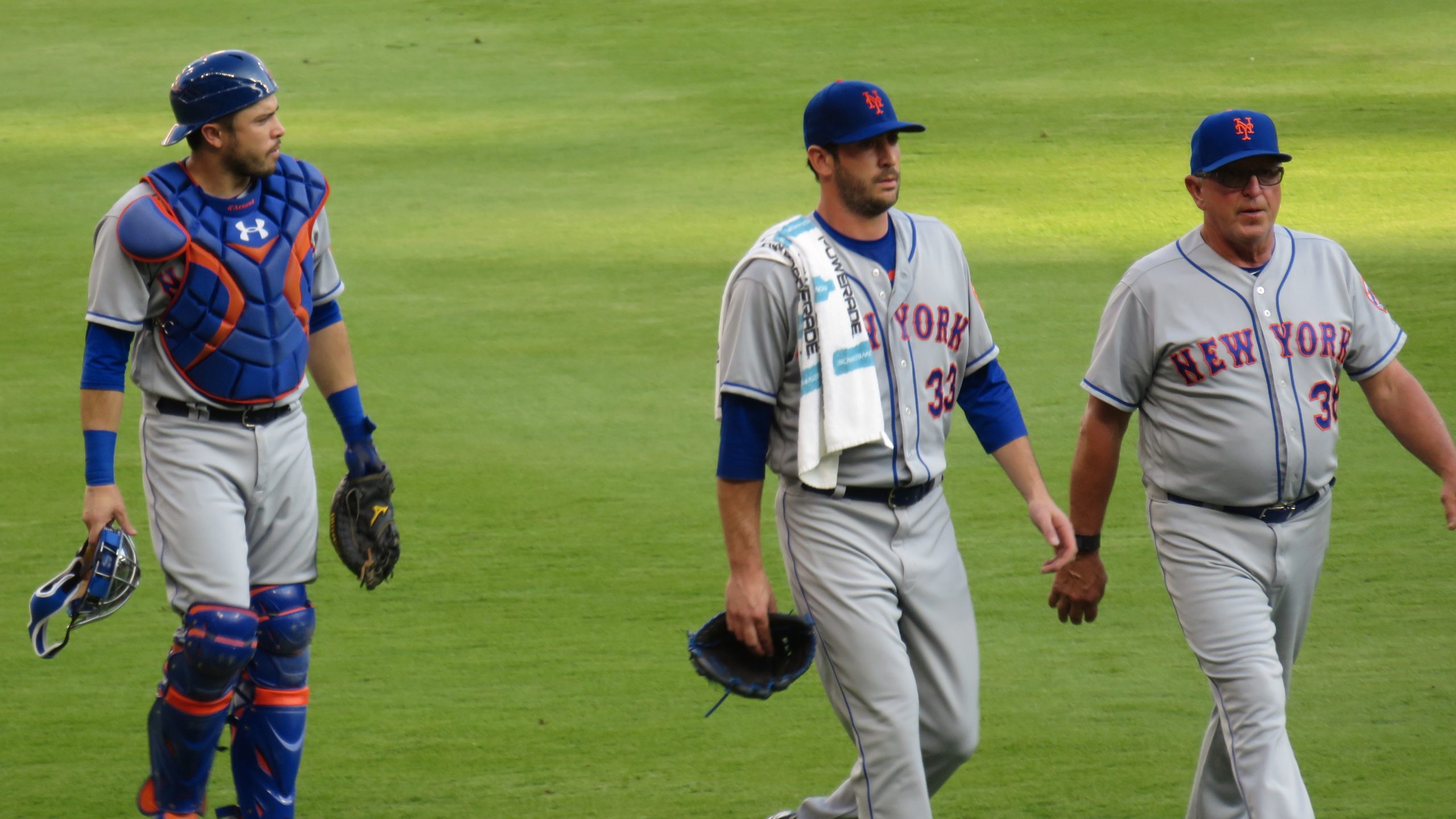 One of the reasons I love doing road trips is the slight chance that you could travel a long way to see some history. Somebody hitting four home runs in a game, throwing a no-hitter, or even the smaller stuff like seeing Yoenis Cespedes hit a grand slam on his return to the lineup. Or Steven Matz and Seth Lugo throwing strong games in their season debuts. It’s a treat to see baseball history in person.

I only went to the Friday game. So I saw this:

ICYMI: It ain’t over till it’s … OVER. pic.twitter.com/45fyiVQ2Vx

Not exactly baseball history. More of a baseball sidebar. This resonates more with the general public than anything else I’ve mentioned above, so I guess I saw some sort of baseball history. (Though I have to tell you, I was dismayed that SNY revealed the true identity of “Mr. Freeze” on Saturday … the day we found out we lost Batman. It’s like Gotham City is rampant with crime again.)

I also saw this:

This, of course, was one day after I posted a Rio Ruiz picture on my Facebook account and made a Duran Duran joke. Karma came back to bite me good on that one. But it’s okay, because I’m comfortable with my new role as the Charlie Brown of baseball. Look, I went to the Justin Upton game, which was immediately followed by Cespedes’ Mets debut and Wilmer Flores’ iconic “Tears of Joy“. Who knows how iconic the three weekend wins the Mets got will be. They’re certainly candidates to be if the rest of the season goes impossibly well. But always know that I kicked it off by going to a walk-off loss in Atlanta. You’re welcome, America.

If nothing else. the weekend illustrated the importance of starting pitching going deep. It was refreshing to see Steven Matz have 54 pitches after five innings on Saturday after witnessing Matt Harvey top 100 pitches in the same time frame. He didn’t even pitch badly, but Friday’s game illustrated the need for Harvey’s out pitch to return. Without checking the play-by-play, it seemed as if the Braves had a million two strike foul balls off Harvey, especially Ender Inciarte. That simple thing is the difference between a fifth starter and an ace. Harvey has been on both sides of that spectrum and I’m not sure what mechanical or emotional change Harvey needs to make to fix this.

So Paul Sewald comes in for the sixth and promptly gives up the lead on a two run single to Dansby Swanson. Travis d’Arnaud hit a home run to tie the game, but I didn’t have a good feeling about this one. Partly because I was there. But partly because with a doubleheader, and the uncertainty surrounding the returns of Matz and Lugo and how much the bullpen would need to be deployed on Saturday looming, I had a feeling that Terry Collins would be willing to throw away Friday to save Saturday. Sure enough, he tried to get more than one inning out of Fernando Salas, whose arm is going to fall off before the season is over, and then went to Josh Edgin to face Ruiz, who ended the night with the walk-off and send me back to the hotel.

But, as you know, the Mets bounced back with efficient outings from not only Matz and Lugo, but from Robert Gsellman, who pitched very well in the early half of Saturday’s doubleheader. That game was highlighted by Cespedes’ grand slam to turn a close game into a rout in the ninth. Cespedes, of course, is still not running at 100%, but he’s back because YOLO. Even rounding the bases on the grand slam, we were nervous. “Don’t run hard … don’t trip over the bases.” These are thoughts we verbalized during Yoenis’ trip home as if we were watching a toddler play T-ball for the first time. This is our lives as Mets fans.

But he made it without incident (that we know of), and Matz and Lugo finished off the weekend with strong debuts to put the team at 28-33. The three wins along with the Nationals getting swept by Texas made for a weekend that was very exciting, until we woke up this morning and realized that even after that the Mets are still 9 and 1/2 games behind Washington. The good news, or maybe it’s the bad news, is that Washington comes to town for four games with their best option at closer on the disabled list because he hurt himself in the shower on Saturday and didn’t tell the team until he blew a save. (How very Flushing of him.) With the Cubs preceding the Nats, this is a chance for the Mets to not only creep a little closer to the top of the division, but to prove that the returns of Cespedes, Matz, and Lugo, will have a ripple effect through the ninth inning and beyond, giving the Mets “contender” status again. Seeing as if I went to a heartbreaking loss on Friday to kick this newfound prosperity off, I suppose that anything is possible. It better be. Because if this doesn’t work, there’s no extra gears left.

As for SunTrust Park, do yourself a favor and make a road trip yourself down here. Your feelings about the Braves, not to mention the Braves moving out of downtown to the ‘burbs becoming the Cobb County Braves aside, they really did a nice job with the new digs. Definite elements of Citi Field and Citizens Bank Park used in the design. (Weirdly, the third base side is more reminiscent of Citi while the right side will remind you of CBP. You should also check out how the Braves did their “Monument Garden” behind the plate. Between the Hank Aaron statue and all the old jerseys and numbers, it is great attention to detail used on the history of the team.

My favorite part might be the Battery outside the right field gate, where fans hang out in an open plaza with musical entertainment on some nights, and enjoy bars and restaurants before the game. And after the game, as I saw after Thursday night’s 3-1 Braves win over the Phillies, their drum line and t-shirt tossers break out in song and party in that same plaza, and the fans are happy to join in. Definitely a unique and lively experience if you can get past the twenty seconds where they play that tomahawk chop tune, which is going to haunt my nightmares for the rest of my life now. Another interesting feature which I’ve never seen before, you can actually rent a glove to catch foul balls and/or home runs. And all you have to do is leave them a dollar for three hours, which I’m sure the Braves compounded into hourly interest to make more money.

As for the food, I give it a solid B+. (Or on the 20-80 scouting scale, a 60.) I was surprised that the Waffle House stand, which I’m told is a southern institution, had zero line when I got up there before the game. The waffle was good, but you have to possess a serious sweet tooth to enjoy it. Especially if you do what I did and get the waffle with peanut butter chips which melt right into the waffle. The Texas Philly Melt, which is a Philly cheesesteak chopped fine and served on Texas Toast, is a winner. But the stars that shine are the H&F Burger and Gu’s Dumplings. The H&F Burger had long lines at both of their locations, including the assembly line stand where you can just order burgers and Cokes (no fries.) It’s a double cheeseburger served with mustard and barbecue sauce on the side. Oddly enough, it works. Gu’s Dumplings come in orders of six each for $9, but their chili style dumplings are well worth the price. (Just make sure you have a coke to wash it down.) These are available at their stands called “Intentional Wok” (/groans).

As for transportation, taking Uber or Lyft to and from the ballpark is easy. Just make sure that no matter how much traffic is gridlocked that you are dropped off and picked up from the designated areas or you will be yelled at by cops. Do what I did and get there early, and you can eliminate the need to be dropped off anywhere else because traffic will not be so bad. If you drive, head out to the tailgate lot at Lot 29 and make the walk to the park that way. You’ll get some nice opportunities for pictures as the one you see above.

And one last bit of advice: Try to go to a game where the Mets win. Or at least one where the Phillies lose.

No, seriously. Take a look at this thing: 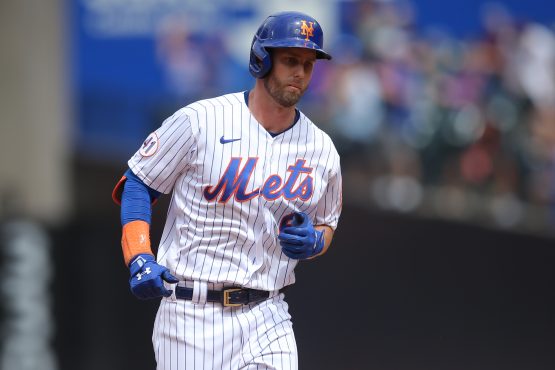 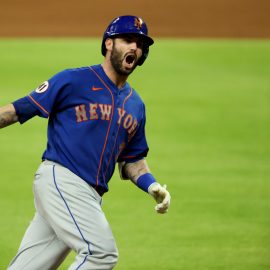