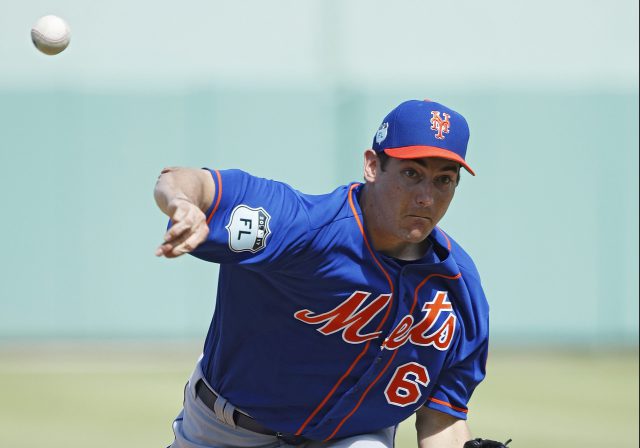 It’s always a challenge for us as a species to not overreact to the first game of spring training. Especially the individual performances. Nothing you see in the first spring training game is a sign of anything, even though I will discuss such events here. But the fact that the game happens is always a big deal, just because it’s actual baseball. Some years, a game is just what you need after endless stories about cars and golf and being merely on time for spring training instead of two months early. That kind of stuff has always annoyed the tar out of me. Some years, it’s great to see baseball on your television, but you’re still upset because it’s fourteen degrees outside and you’re like “damn, why am I here and not there?”

This year, there has been no drama, and while the game wasn’t on television (not even on NESN for the MLB.tv viewers among us), we had a 70 degree day to enjoy. So it’s almost as if the baseball gods are telling us something. For me, it was to go out there and listen to the game on my phone. So that’s exactly what I did. (Well … after the fourth inning, because data fees, ya know?) And it was great to be out there in great weather … baseball weather … with Howie Rose in my ears. Intangibly, the omens were good. But there were other omens outside of the good weather. Fourth inning, I got a girl walking with her boyfriend (or friend who happens to be a boy), and she trips on the curb and takes a header right in front of me. And I’m thinking it’s a Jerry Blevins omen or a Ray Ramirez omen. Then as I’m walking through the baseball fields, I see a kid in a Cespedes shirsey hit a weak ground ball, and the throw pulls the first baseman off the bag, but Cespedes shirsey kid was called out and there was actually a small percentage of me that wanted to freak out and argue with the umpire (who was also the pitcher). Then I realized that I’m not completely insane, but it was fantastic to have a May type day for the spring opener. Perhaps that’s the biggest omen of all. Maybe the baseball gods are telling me to get ready for an interesting season.

Michael Conforto, who I believe needs as many at-bats as possible this season, lined one to right center field to send a runner first to third and set up the first run of the game. For those who didn’t have Howie on today: At that moment Steve Lyons, from the Red Sox radio booth, pointed down at Conforto and gave the Mets booth the thumbs up. Conforto, who would later hit a home run at high exit velocity, will be a huge key going forward as Terry Collins will try to get him at-bats. And while it was thought that Conforto would need to take grounders at first base to get into the lineup, and I was a proponent of that, it was actually Jay Bruce who has been taking those grounders according to Howie and Wayne Randazzo. That might even be a better case scenario as I’ll take Conforto, or you or me, defensively over Jay Bruce.

I’ll admit that I panicked a bit when Hanley Ramirez hit a long foul ball against one of Seth Lugo’s breaking balls today. Lugo went two hitless innings today so it’s silly for me to worry about a long foul ball, and I’m not going to worry about it. But Lugo’s curveball is supposed to be his bread and butter. While batters made some hard contact over Lugo last season, they haven’t really made that hard contact off his curveball. So yes, the long foul ball scared the bejesus out of me. The two things I look for in Lugo this spring is how he’ll react to pitching in some big spots in the World Baseball Classic for Puerto Rico (if he gets them), and whether he can develop another one of his pitches into a plus pitch like his curveball. The WOR broadcast mentioned the changeup, which would be great if he can develop a good one. But it really can be any pitch. Even if he spots the fastball better, it helps his curve. I’m looking forward to Lugo continuing his development and how he’ll use the WBC experience to his advantage and grab hold of the fifth rotation spot.

Gavin Cecchini will also get some at-bats in the World Baseball Classic, and he’ll also be in Mexico playing for Team Italy. Cecchini is another player who will benefit, if for the longer run, by playing meaningful international games in the spring. He hit a long home run over the Monster South in the second inning today to give the Mets their second run. Cecchini, I think and hope, will play a major role on this team starting in the ’18 season … especially if the Mets don’t re-sign Neil Walker long term.

The only drama regarding this game would be if the Mets were going to pitch their second ever spring training no-hitter, and they went to the seventh without giving up a hit. But Josh Edgin gave up a double to Ramirez and a long dinger to Brian Bogusevic. After Lugo, Marcus Molina, and Rafael Montero went two hitless innings, Edgin clearly needs to be cut after his terrible outing in the seventh. And yes, I’m overreacting. But in all seriousness, with the competition for lefties in the bullpen, any bad inning will be like Carl Erskine bouncing one in the bullpen forcing Clyde Sukeforth to recommend Ralph Branca to face Bobby Thomson. We know how that worked out.

But all in all, a good start to the spring season for the Mets. Washington comes to Port St. Lucie to open up the home spring season tomorrow. If you remember the last time these two teams met early in the spring, the Nationals stole a million bases in that game and everybody went “ooooooh, Nationals are sending a message.” Well see what happens tomorrow between the two N.L. East rivals.

By the way, if you haven’t heard our podcast yet, you’re in luck because I’m linking it here for you. It also comes with a very special announcement at the end!