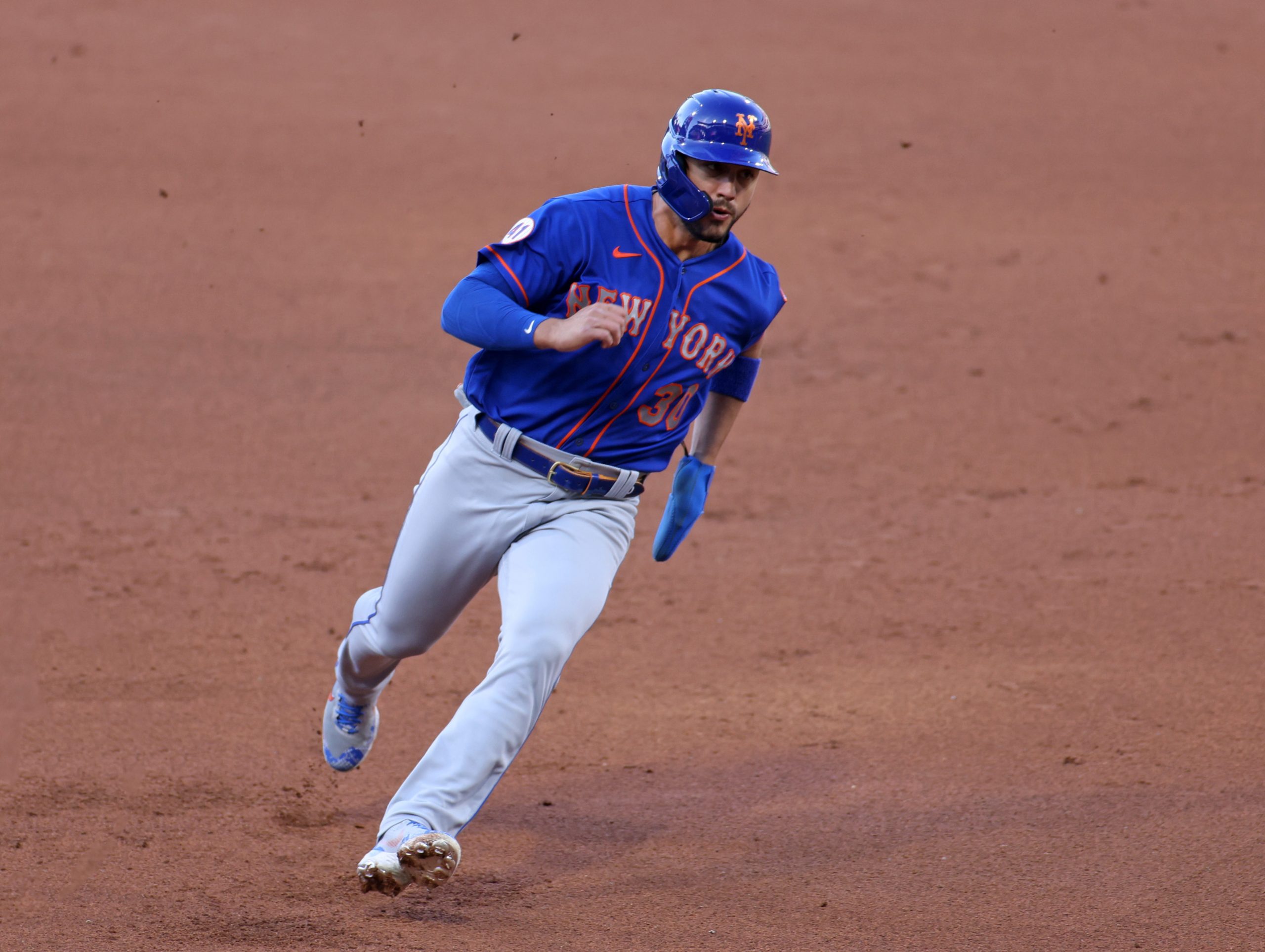 On our podcast (which was recorded on Friday afternoon and am shamelessly linking to here so please listen because it was fun) I opined that the Mets were going to have their yearly 16 or 19 or 25 run game at Citizens Bank Park in this series, simply because they always seem to have it when they are at their lowest point as an offense. They’ve had these games with lineups worse than the one they throw out there this season.

After the Mets dropped four on old friend Zack Wheeler, I really thought this would have been the game that they would do it. After a Pete Alonso double, a two run double by Michael Conforto, and an RBI single by J.D. Davis, the Mets had a chance for more after a single by Dom Smith. But with the hammer in hand, James McCann left it at the feet of the Phillies dugout by grounding into a double play to end the threat.

The Phillies scratched out a couple of runs in the second, culminating with a two out RBI single by Zack Wheeler which I’m sure frustrated Taijuan Walker. And from there, the Mets were shut down completely by Wheeler, other than a two out opportunity by Brandon Nimmo with runners on second and third in the 4th, but he hit a humpback liner to Didi Gregorius to end that threat.

A two run HR by Alec Bohm tied the game off Walker, and this was looking like a game that would have sunk the Mets lower than they were even last night, after losing on a two run strikeout to a team with no Bryce Harper, Didi Gregorius, and J.T. Realmuto. The Mets were headed down that path, especially with injuries to Brandon Nimmo (who hasn’t looked right after coming back from the hip injury, which might have led to a problem with his groin but I’m neither a doctor nor a Mets insider, and apparently it was a bruised finger injury so please follow Anthony DiComo for correct information) and J.D. Davis who also left with a bruised finger.

But the Mets got a huge break in the 7th in what was the worst sequence by a group of umpires in three days. Matt Joyce grounded into what would have a 4-6-3 double play had it not been for the overshift on Matt Joyce. So Francisco Lindor tries to tag Andrew McCutchen but couldn’t reach him. McCutchen was called out even though he clearly held his path on the bases. Then, Lindor threw to first and Matt Joyce was called safe even though he was clearly out on the play. The good fortune for the Mets came because teh McCutchen play wasn’t reviewable while Joyce at first base was, so it was a double play to end the inning. While I have no sympathy for the Phillies, this bad umpiring that is permeating the sport like the scent of rotten eggs which have been baking in the hot sun for three weeks (see: Offense, Mets) is going to come back to bite us during Game 163 and we’re going to be all like “WHAT THE HELL!!!” And nobody will feel sorry for us.

Then came the 9th inning with the score tied at 4-4:

In Conforto’s previous seven games going into tonight, he is slashing .280/.357/.520. Those numbers only go up after his double and clutch home run. What I found hilarious is that as I was looking up these numbers, this came up when I google searched “Michael Conforto Baseball Reference”: 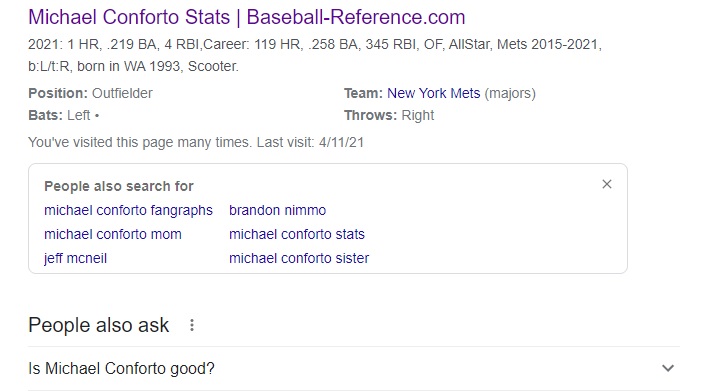 First off, yes: I’ve visited this page many times.

Second, people also asking “Is Michael Conforto good” is hilarious because I’m not sure Google has the answer to that. But I’ll keep visiting his Baseball Reference page until the answer is crystal clear to me. I’ll report back.

And third, who in the hell is searching for Michael Conforto’s mother? Please leave mom alone!!!

Edwin Diaz took care of the bottom of the order without incident, which is great because … well, it’s great. But also because you know that if this was 2019 and Jeffy was still the owner and Brodie Von Monorail still roamed the streets and Todd Frazier was still coming up with new and exciting handshakes, Diaz might have blown this game. But we’re in a new era and Diaz is taking care of business quite nicely this season with a 1.80 ERA. (Yes, it was the bottom of the order. But we’re not going to need Edwin Diaz to strike out Bryce Harper, Mike Trout and Hank Greenberg most nights.) In fact, the entire bullpen is killing it. The main guys: Diaz, Trevor May and Aaron Loup (who pitched three scoreless tonight) along with Miguel Castro and Jeurys Familia have a 1.56 ERA in 40 and 1/3 innings. The bullpen WAR is somehow -0.5, but that’s on Jacob Barnes, Robert Gsellman, Trevor Hildenberger and Luis Guillorme.

The work of the top end of the bullpen along with the starters, who have the second best ERA in the league, makes the struggles of the offense that much more frustrating, because the Mets would be running away and hiding if they were doing even a little better than what they’ve been doing. Hopefully the four runs off Wheeler and the big 9th inning home run kick starts things. I’m always careful about proclaiming that “this is the one”, because I like to let things breathe. But this is a new month. Trevor May got the victory on May 1st. Perhaps this is a sign that karma will decide to be on our side for the first time since 1986.

Or maybe this “Donnie” character who Alonso and Conforto keep mentioning as a new mental coach is helping.

I may be wrong, but I've been around this group enough to guess. I'd be surprised if Donnie exists.

Has inside joke written all over it.

So if you use your mental capacities to invent a mental coach, wouldn’t that cancel each other out? Or does it mean that the Mets have achieved true galaxy brain status and have everything figured out? If that’s the case, is there a God? Why do we exist? What is the meaning of life?

And is Michael Conforto good? 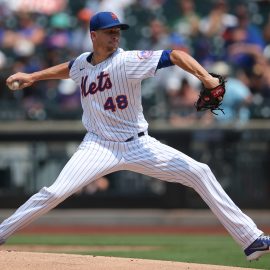