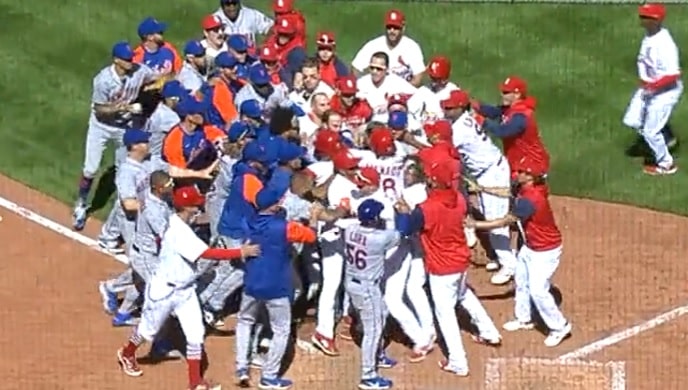 It all started last night.

(Okay, it actually started when Noah Syndergaard got ejected for throwing one behind Chase Utley in 2016, because it seems that a Met hasn’t retaliated for anything since then. But this version of “Brawl For It All” started last night.)

The Mets are sick of getting hit by pitches. pic.twitter.com/vrUlDEGMI6

The Mets are an angry team after being hit by so many pitches this season. Let me illustrate how stark the difference is between the way the Mets have been hit and the way other teams have been hit:

Now, does this mean teams are targeting the Mets? Even I would be surprised if that was the case. But does that mean that the Mets shouldn’t be angry about it? Should they instead preach the merits of small sample size and everything evening out because that’s the nature of statistics? No! I expect them to be angry about having projectiles hurled at their head because these pitchers don’t know where the hell they’re throwing the ball.

“We’re going to have to do something about it if it continues.”

Sure enough, it continued on Thursday when J.D. Davis got hit in his ankle in the 7th inning.

J.D. Davis is hit in the foot with a pitch.

Ronnie: "How can you miss that badly on a 3-2 pitch?" pic.twitter.com/xHllYvQ2oY

When Buck dashed out of the dugout, and when it was apparent that Davis was in pain, that was it. You knew there was going to be some sort of response from the Mets. Not revenge, not even retaliation, just a message to the Cardinals and perhaps to the rest of the league that enough was enough. The Mets that turn the other cheek every single time they’re thrown at … and make no mistake about it, that’s been the Mets modus operandi since Noah’s pitch to Utley … were done. And you knew it when Davis got it.

The benches have cleared after Yoan López threw up and in at Nolan Arenado. pic.twitter.com/VieEPQSKuu

The ironic part about all of this is that if you grouped all the pitches the Mets got hit by or came close to getting hit by, and then you put Lopez’s pitch in that group, the one pitch that had any actual purpose to it was Lopez’s pitch. That’ll probably mean that Lopez will be the one player to get suspended for all of this when it’s all said and done, because you know that the Major League Baseball watchdogs are on the case.

Here is a statement from an MLB spokesperson regarding the Mets’ high hit by pitch rate this season pic.twitter.com/rEqcVsO1J7

Yeah, we’re still waiting for a Chase Utley suspension for breaking Ruben Tejada’s leg, so forgive me if I don’t get excited by Major League Baseball’s “monitoring” of the situation. I’ve seen how they monitor replay reviews. I’m not impressed.

But Lopez’s pitch, while it might have been too high, was basically a fastball that started on the inner half of the plate, and ran in. It was just enough to make Arenado uncomfortable, but … and I can’t stress this enough … it didn’t come close to hitting him. Lopez said that it got away, but he’s going by the Marshawn Lynch Rules on that one: He’s just saying that so he won’t get fined. Lopez’s control was better than the control of any of the meatball throwing pitchers that had hit Alonso in the head, or Starling Marte in the shoulder, or Francisco Lindor in the c-flap … shall I go on?

That’s what made this hysterical:

"When you come up top like that and jeopardize someone's career and life, yeah I take exception to that" pic.twitter.com/MRI2QOfeRf

Jeopardize his career and life? Just stop, Oli. Did you see what happened to our guy not 24 hours ago? At the hands or your pitcher who has no idea where the ball is going? Yoan Lopez averaged four walks a game in the last two season, and even he knew where his ball was going. And Nolan Arenado, who had his life threatened by turning around, was the one that threw a fit and escalated what should have been the end to a new beginning. Not … I repeat, NOT the first baseman that was hit in the helmet twice this season.

Does Buck Showalter think Nolan Arenado's reaction was out of line?

"I know our player got hit in the head and went to first base" pic.twitter.com/E8W0XhW1N0

And while we’re on the topic: Make no mistake about it. This is as much a Major League Baseball problem as it is a Mets problem. For years, scouts and analytics people have prioritized max effort 100 mph relievers over the Kevin Tapani and Bob Tewksbury types who don’t throw hard but actually know where the f*ck the ball is going. Combine that with what Chris Bassitt alluded to last night: The baseballs have been changed so much since MLB bought Rawlings in 2017 and took control of the central object of the game … the ball … and the ball sometimes changes from game to game and stadium to stadium. Then you take away the stuff that helps pitchers get a grip on the ball with no alternate plans to give the pitchers some grip to the ball, and you have 102 mph objects going at players’ heads.

Mikolas theorized that perhaps Bassitt, on a cold night, didn’t have enough sweat to mix with rosin. “If you’re not comfortable with a ball, don’t throw it. If you toss back ten in a row, maybe that sends a message.”

Way to completely misread Bassitt’s words. And by the way, he threw six shutout innings last night. But thanks for playing, Miles. We have some lovely parting gifts including “Nuance: The Home Game”.

All of the shenanigans were successful in hiding the fact that the Mets had a 4-1 lead off of Steven Matz and wound up losing the game 10-5. Carlos Carrasco didn’t have it, and the Cardinals dinked and dunked him to death as Cookie gave up 7 earned runs in 3 and 2/3’s. But the Mets put the series away thanks to Arenado throwing the third out away on Monday (speaking of Cardinals that don’t always know where their throws are going.)

The Mets will now welcome the Phillies to Citi Field on Friday for a three game series. Consider how intense that rivalry has been for the last 16 years, and combine that with the fact that the Mets will be headed into that series nice and frothy after today … let’s just say that the Flushing bear isn’t one that the Phillies want to poke this weekend. As for the Mets, they probably want to steer clear of the nonsense if they can, because of paramount importance is the upcoming two weeks of N.L. East opponents that could decide whether the division race is a 1986 style laugher, or another epic dogfight to the end. But if Jose Alvarado wants to get all yappy again, then all bets are off. Just remember, Philly, that Stubby Clapp won’t be around to help you.

Stubby Clapp taking down Pete Alonso will be in history books pic.twitter.com/dXGWR89eyD