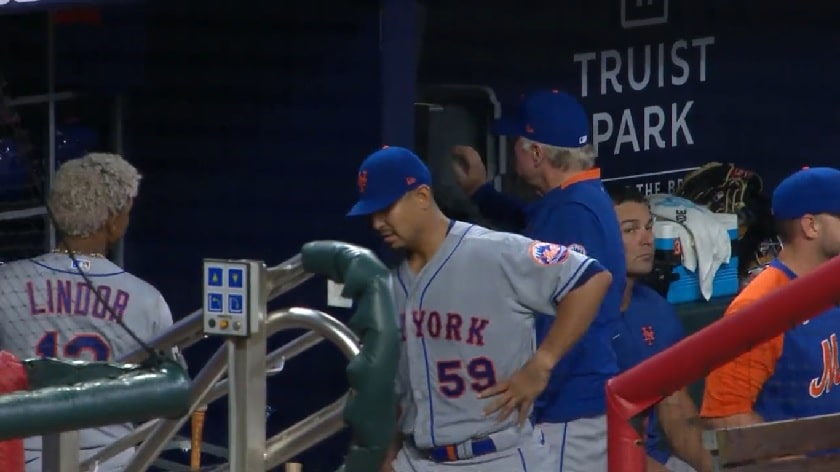 Usually there isn’t a whole lot to say about a 13-1 beating.

But one has to wonder what the thinking was when Buck Showalter and company brought an ineffective Carlos Carrasco back out to pitch the last part of the third inning after a 55 minute rain delay with the Mets down 3-0. He ended the inning wincing and grabbing his side, and had to be pulled with what the Mets called “left side tightness”. Now, if this was a past regine, I’d be all over them. But since it’s Buck and he seems to know what the f**k he’s doing, my “what the hell were you thinking” takes on the form of “seriously, I’d like to know what you were thinking.” The former is rhetorical, the latter is curiosity.

I guess Buck wanted to avoid what almost actually happened, which was filling up six innings with Joely Rodriguez (who pitched yesterday), Adomis Medina, and Mychal Givens (who also pitched yesterday). Except now it happened because of Carrasco being hurt rather than him just being pulled for precautionary reasons. (And boy did it happen, as Medina and Givens coughed up an eight run 6th inning to make it a laugher.) Hopefully Carrasco’s injury isn’t serious (bad enough that Luis Guillorme is out for a month), and hopefully it had nothing to do with pitching after a 55 minute rain delay. And hopefully this doesn’t gas the Mets’ bullpen

And God bless Darin Ruf for saving the bullpen with a two inning 14 pitch outing. Maybe the eight run 6th, which allowed for a position player to pitch, was a blessing in disguise. After all, we are the luckiest team in the league.