Just Who Is Ryan McLeod? 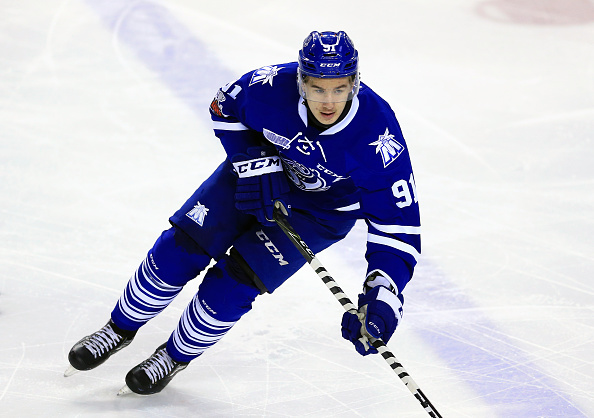 The Edmonton Oilers made a pick in the second round of the NHL Entry Draft for the first time since 2016 this past June. In 2016, it was two-way winger Tyler Benson who got selected. This past June, it was OHL center Ryan McLeod, a Ryan Smyth fan growing up, who the Oilers selected.

The Oilers, who haven’t had a strong group of AHL forward prospects in exactly one forever, are finally building a group below the NHL roster that has promise and potential. McLeod is the latest to join that group, entering the system slated to be a key part of the Mississauga Steelheads this coming season.

His scouting report glows, he has the tools and was ranked as a first round talent heading into the annual selection process. After posting 70 points a year ago, McLeod joins the Oilers system as the best center prospect outside of the NHL. He’s a key prospect for this group moving forward.

So….Just Who Is Ryan McLeod?:

McLeod was a key part of the Steelheads attack last season, playing on the same team as his brother and former New Jersey first round pick Michael McLeod.

McLeod scored 26 goals a season ago, adding 44 assists for a total 70 points in 68 games. McLeod plays a game based on speed, which fits the organizational mandate to get quicker. On top of that, he brings enough size to the table (6’2″, 200 pounds) to appeal to the Chiarelli/McLellan player type.

On the powerplay, McLeod was one of the best in the OHL at producing offense a season ago. That’s a very appealing skill set to have, and again fits a very big need in Edmonton. That said, McLeod didn’t produce at five-on-five like a first round pick normally does, hence him falling down the draft board a little bit.

Although he has size and speed, scouts warn that McLeod doesn’t use those attributes nearly enough to win puck battles or drive to the net. In fact, some scouts argue that McLeod pulls up and looks for a pass far too often, when he should simply by driving in to create offense.

This is a raw player who has a ton of upside, but there are absolutely some flaws to his game that made him a second round pick. McLeod has talent, however, and should be an NHL player in a few seasons. He’s not perfect, but there is a lot to like here.

Here are some words on Edmonton’s new young center.

The Draft Analyst: The younger brother and teammate of Devils’ prospect center Michael McLeod plays a similar up-tempo game based on speed and power. Ryan consistently provides offense, but he’s also a responsible player who knows how to use his size and strength to win most of his puck battles. Because of his size, skill and speed, McLeod probably is one of the biggest “upside” picks in a draft thin at center. He’s often overlooked because he didn’t play at any international events or prospect showcases outside of the one-game Top Prospects Game exhibition. He’s a very good playmaker reliable finishing around the net, and he’s a strong, powerful skater with a blistering shot who can play either center or wing. McLeod distinguished himself as a lethal option who could shoulder big minutes after Michael and sniping winger Owen Tippett left for NHL training camp. He may not possess his sibling’s blinding speed, but he is agile and difficult to knock off balance. McLeod’s time as a depth player revealed a prospect with pro-quality puck skills who can be deployed to address any in-game concerns his coach may have.

In all likelihood, McLeod is at least two seasons away from becoming a full-time NHL’er. I suspect we will get a good look at him during the rookie games, and then early in training camp and in the preseason. That said, McLeod isn’t going to be heading to Europe with the Oilers, and he should be back in the OHL by October 1st.

I think an uptick in points-per-game and in five-on-five offense is the kind of thing Oiler fans should be looking for this season out of McLeod. A strong season in the OHL with offensive improvements would indicate that he is developing at an acceptable rate and that he is still on pace as an NHL prospect.