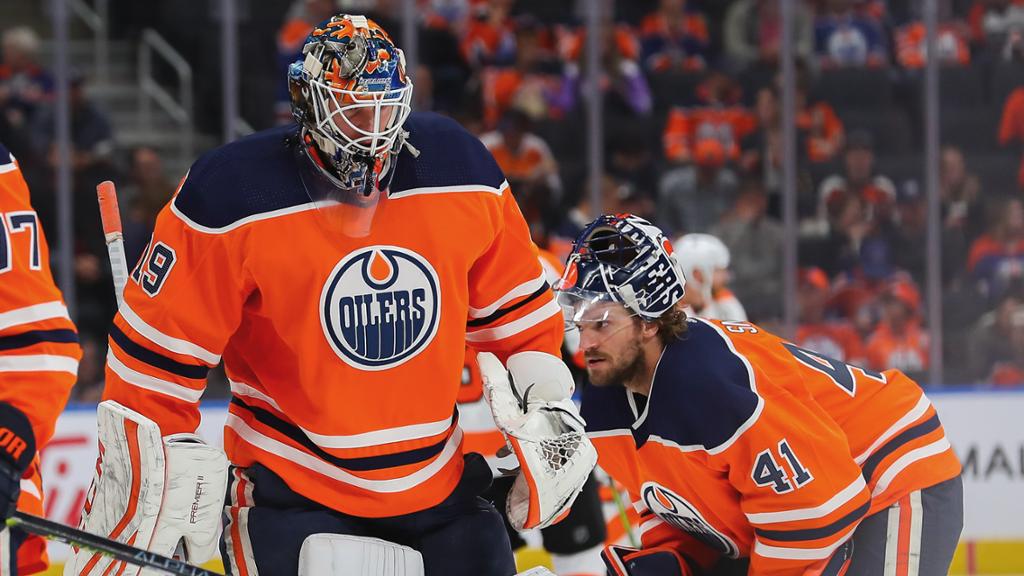 Many, myself included, believe that a change is needed between the pipes this off-season for the Edmonton Oilers. Mikko Koskinen’s .917 save percentage was average, and he’s proven to be a solid tandem goaltender. Mike Smith’s .902 save percentage wasn’t good enough this season, although Smith did have stretches were he was strong in the Edmonton crease.

At the end of the day, however, it wasn’t good enough. That was especially so in the best-of-five Qualification Round series against the Chicago Blackhawks. There, the Oilers had the worst goaltending of any of the 16 teams fighting to advance to the playoffs. It’s a big reason why they are at home right now.

Holland addressed the position on Monday in his year-end press conference. The veteran manager doesn’t believe it is all doom-and-gloom in the crease.

“My assessment over the regular season, the first 70 games, goaltending was a real strength of ours,” Holland said. “I thought the coaching staff did a great job early on. Between Tippett and (Goaltending Coach Dustin) Schwartz, they sensed when it was time to let one guy run for a little bit. Early in the season, they let both guys get into it.

“The goaltending didn’t play as well for us in the playoffs as they did in the regular season. It’s a small window. You’re talking four games. Going forward, Mike Smith is an unrestricted free agent. Koski has two more years to go in his contract.”

Koskinen is likely to return, if for no other reason than his contract. The deal carries an AAV of $4,500,000. Yes, Koskinen has proven to be a solid tandem goaltender, but he is getting paid to be a starter in this league. He hasn’t proven that yet.

If the Oilers are going to build on their 2019-20 season, they’ll need strong goaltending every night. Can Smith, who is approaching 40, give that to them next season? Holland wasn’t committal one way or the other.

Sources have indicated, however, that Holland is likely to check both the free agent and trade markets for two goaltenders this October. One for the NHL team, and one for the AHL outfit in Bakersfield.

“Probably, our best young goaltender is Stuart Skinner. I think he needs to be in the American League next year,” Holland continued. “He needs to really establish himself as the No. 1 goaltender in the American Hockey League playing on an every-night basis. He’s got a lot of talent, he’s a big guy, 6-foot-4 and takes up a lot of space. We need him to build off that. We have to decide whether we’re going to re-sign Mike Smith or look at other alternatives. That’s what I got to decide here over the next few weeks.”

His decisions here will no doubt have an impact on the 2020-21 season in Edmonton.