Leading The League In The Heartwarming And The Bizarre 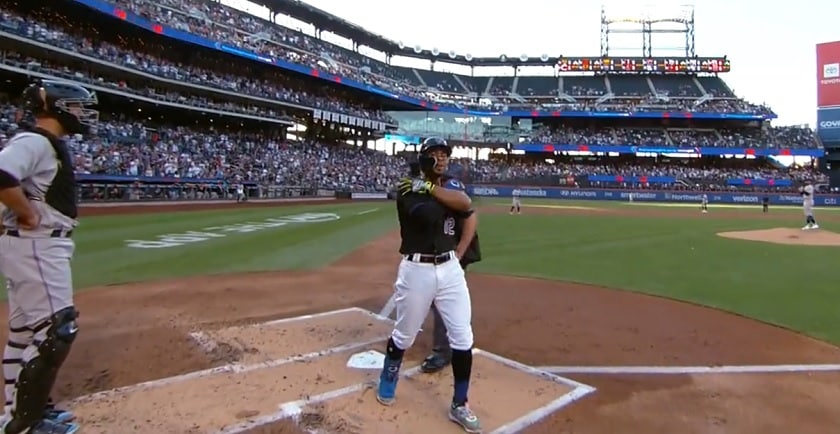 The Big Energy of the 2022 Mets went up against the Annoyance Energy of the Miami Marlins. Annoying, because as you know, they like to throw monkey wrenches in New York Mets seasons. Today was their first chance to start the process of destroying what the Mets have built. Tonight they faced Pablo Lopez who has had some pretty impressive pitching performances against the Mets, but most famously a seven inning one hit masterpiece back in 2019.

The Mets surpassed that in just three batters on Friday.

Because the Annoying Energy of the Marlins is no match for the Having Your Mom In The Stands For The First Time As A Met Energy of Francisco Lindor, whose three run HR gave the Mets a 3-0 lead right off the bat. Lindor might be simply warming up after the setback with the broken finger, but it’s much cooler to use Mom Power as the sole reason for this, and the sole reason for Lindor to be all over the place on defense tonight as well. The broadcast team noted that Lindor wasn’t as “chatty” as he usually was and that he was in a zone. Maybe we need to get Mama Lindor to all the games.

The 6th inning was just outlandish. With runners on first and second, Luis Guillorme hit a ball deep to center field, and Bryan De La Cruz slammed into the wall, juggled it, had it fall into his hand, and then threw the ball into the infield where the Marlins went through the motions of stepping on second and first bases. So Alan Porter’s first instinct was to say “okay, it’s a triple play!” Now, it would have been the wildest triple play in recorded history, Porter didn’t let that cloud his judgement at all as he confidently signaled “three outs”. Except that the ball rattled off the wall 17 times and it was nowhere near a triple play no matter how hard all the highlight shows hoped for it. Yet it somehow took replay about an hour to figure out that the ball hit the wall.

So how do you end an inning which almost ended in a triple play? Why, you score 7 runs, of course. J.D. Davis’ single made it 4-1. After Tomas Nido and Brandon Nimmo made the first two outs of the inning, Tommy Nance walked Starling Marte and hit Lindor with a curve ball to bring home two runs to make it 6-1, and then Pete Alonso ambushed Nance with a first pitch grand slam to make it 10-1 and send Gary, Keith and Ron to the Topps cards. But not before Luis Guillorme tried to kill Alonso by throwing a bag of mini-knives right in Pete’s eyes.

Okay, they were sunflower seeds. But those things are sharp and they have salt in them. I know this team is different and I know this season is different, but for heaven’s sake if we’re going to make this a thing, at least have the Mets wear “Home Run Goggles” or something. (Personally, I prefer the Homer Horse. What happened to Chester, anyway?) I know the Mets have largely escaped getting hit by 17,000 pitches (four on Friday), but that doesn’t mean we can go all willy nilly throwing salty seed shards right into people’s eyes.

The Marlins tried to will themselves a comeback as they took advantage of some bullpen foibles in the 7th and 8th, but it turns out a 10-1 lead was enough to cruise to a 10-4 victory. Carlos Carrasco, by the way, continued to advance my theory that Max Scherzer returning to the dugout to have his starting rotation fireside chats is helping the rotation get back on track with 6 and 1/3’s innings working around 8 hits and two walks to give up three runs (two of them which were inherited by the bullpen and allowed to score). Carrasco’s good start and the Mets offense unloading on Pablo Lopez and Tommy Nance combined with the imminent return of Eduardo Escobar and the Braves losing their first game since Steve Avery was active to make for a very good Friday night in Queens.

The afternoon wasn’t so hot though …

Tylor Megill underwent an MRI this morning and has been diagnosed with a right shoulder strain. The immediate plan is for him to be shut down from throwing and re-evaluated in four weeks. Additional updates will be provided as appropriate.

Well here’s to you, Trevor Williams. A nation turns its lonely eyes to you. (Whoo whoo whoo.) Hopefully messrs Scherzer and deGrom can come back before the All-Star break, as planned. But is there a new focus on Billy Eppler to go get another starter? Is Trevor Cahill that guy? Is Tommy Hunter that guy? Will it still be a bullpen piece or two that will be the focus? All to be decided by the events of the next few weeks.