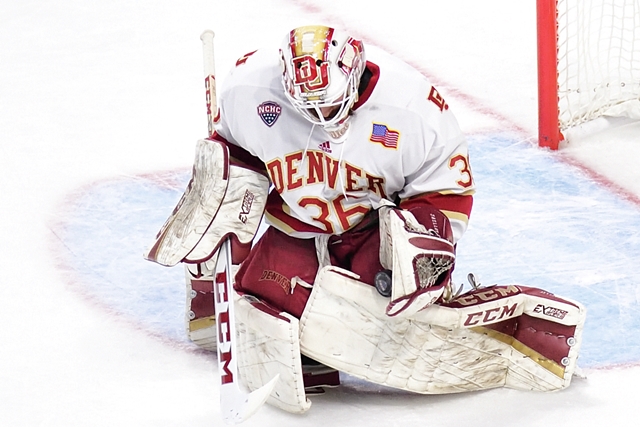 During the pre-season, the University of Denver Pioneers hockey team looked like a good choice to repeat as NCAA champs. The NCHC media selected the Pioneers as the number one team in the preseason conference poll. Denver was a unanimous choice.

The Pioneers were the defending champs and returned all of their high-end underclassmen players. Before the season started, some were boldly predicting that the Pioneers would win back-to-back regular season NCHC titles and another NCAA title. That still could happen.

Through 18 games, the Pioneers have been up and down. One game they’re dominating their opponent. The next game, the Pioneers are losing a game in dramatic fashion.  Recently, their head coach Jim Montgomery has taken them to task in the post-game media scrums (North Dakota and Dartmouth).

While it sounds cliché, there aren’t any gimmes in college hockey. You have to play a full 60-minute game. You can’t take periods off. Even against a team that’s ranked 59 out of 60 teams in the Pairwise Rankings.

The Pioneers no longer have All-American defenseman Will Butcher in their top defensive pairing. That’s a huge hole to fill. Last season, Butcher was one of the top defensemen in the country. Currently, Butcher is playing for the New Jersey Devils. In 32 games with the Devils, Butcher has scored (2g-19a–21pts), he’s also a plus-five.

Last season, DU All-American goalie Tanner Jaillet had a magical season going 28-5-4, 1.84 GAA and .929 save percentage. For most of the 2016-17 season, Jaillet was a rock in the Pioneers net. The Red Deer Alberta native gave up three or more goal nine times. What’s even more impressive, he gave up four or more goals only once.

The Pioneers aren’t finishing games like they did last season. During the first half of the season, the Pioneers have lost four games where they had leads entering the third period (Western Michigan x2, North Dakota, and Dartmouth).

Statically, the Pioneers are a top-heavy team. After their top three players (Henrick Borgstrom, Dylan Gambrell, Troy Terry) they don’t score a lot of points. That trio of players has scored 40 percent of the Pioneers points.

During the last six games,  the Pioneers top-three forwards have struggled on the score sheet. On Saturday night against Dartmouth, Terry broke a five-game pointless streak and has scored (1g-0a—1pts).

The sophomore phenom, Borgstrom has been quiet in the last six games scoring (0g-2a—2pts).

I want to be clear, the Pioneers are a very good hockey team, but they’re not the dominant team they were last season. There are 59 other teams gunning for the Pioneers. No one is going to just hand them the title because they look good on paper. Finally, they can’t rely on their skilled players to bail them out all of the time. They need to have balance and everyone buying into a system.

After the 5-4 loss to Dartmouth, coach Montgomery let his team have it. Listening to his post-game comments, it’s pretty clear who Montgomery’s comments were directed towards; the veteran players and the high-end stars.

“I’m confused. I just don’t understand why we’re not learning, Montgomery said. “I told the players we have to take this holiday break and people have to come back and see if we’re really committed to playing the right way. We don’t play the game the right way. It’s quite embarrassing.”

You can watch Montgomery’s post-game comments from game one between UND and DU. There’s an emerging theme.