No Big Deal, But A Big Deal 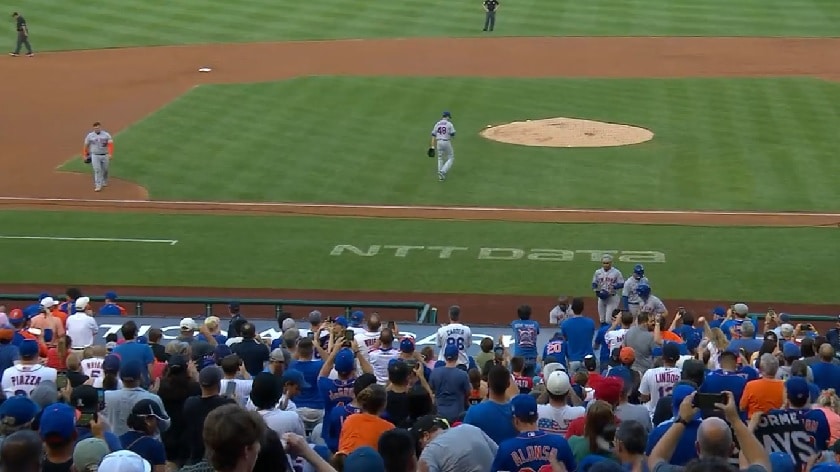 It was like Jacob deGrom had never left. Electric stuff and no run support.

But he did leave. He left for 13 months. Sos his efforts tonight against the Washington Nationals were a big deal, even if it wasn’t the big deal Mets fans had wanted.

And regarding trade deadline day: Look, I didn’t love the Mets’ activity, but I didn’t hate it either. My biggest disappointment was that they didn’t get David Robinson from the Cubs, who wound up trading him to the Phillies. Robertson has those reverse splits that makes him basically a lefty pitcher, which the Mets needed anyway. He could have been the lefty specialist and the 8th inning guy all in one.

But otherwise, I thought they did okay. While I’m not going to do cartwheels, Mychal Givens had a nice season with the Cubs, and Darin Ruf … who they acquired from the Giants for J.D. Davis, Thomas Szapucki, and two lower level prospects … has an OPS of .886 against lefties this season and .929 against them in his career. So, he fits in perfectly with Daniel Vogelbach to create a lefty/righty DH platoon to replace J.D. and Dom Smith. Sure, the Mets could have gotten a sexier name like J.D. Martinez or Willson Contreras. But the Mets weren’t going to trade for them to be the righty portion of a platoon. And to me, there’s a reason they weren’t traded … their price had to be way too high. So Ruf, while not the name everyone wanted, might be the best fit.

The caveat to that is that the Mets might have overpaid a little bit for him. They traded Davis, which they had to, and Scapucki, who they really had no designs for after he was a prospect for 20 years. Now I’m not going to pretend I know anyting about the two lower level minor leaguers (Nick Zwack and Carson Seymour), but I will say that a text chain that I’m on who skews towards the prospects absolutely loves Zwack and thought it was a bridge too far for Ruf, a rental. So I’ll trust their judgement more than mine on that. But A-ball pitchers are lottery tickets, and I’m not going to be the one to rue the loss of pitchers I never heard of before five minutes after the trade went down.

Brooklyn LHP Nick Zwack was far and away the best pitcher in the #Mets system in June.

As for the game, deGrom looked sharp until the 4th when Luis Garcia smoked a high fastball off him to drive in a run. But otherwise, he hit 102 on the gun and his command was sharp. So if this acted as his final minor league rehab start facing a team that had just lost Josh Bell and Juan Soto before facing the Braves this weekend, then I thin you’d have to have coal in your heart not to be pleased with that effort. (And I know people that have had their hearts surgically replaced with coal, and they tell me it’s painful before they kick me out of their house.)

But the team that had just lost Josh Bell and Juan Soto somehow overwhelmed the soft underbelly of the Mets bullpen. After Francisco hit a bomb off Victor Arana to tie the game at 1-1 in the 6th, Stephen Nogosek yakked it back by giving up homers to Garcia and Yadiel Hernandez to make it 3-1 and then 4-1. Yoan Lopez then came in for the 7th and gave up Joey Meneses’ first major league hit, a home run, to make it 5-1, which was your final score. I guess Buck Showalter didn’t feel it was worth it to put in the big guns tonight against the Rochester Red Wings, giving the big guns a rest for tomorrow. Fine. The problem was the Mets’ bats not being able to get a key hit as Jeff McNeil flew out to center with the bases loaded and two outs in the first, while Brandon Nimmo got unlucky with runners on second and third and somehow lining hard into an inning ending double play with the score 4-1 in the 7th.

Certainly, this game had bad optics coming on the heels of a less than expected deadline day. But I truly believe in my heart that optics are bullshit, as I see the uselessness of optics in my life away from this blog. The Mets aren’t going to collapse because of one day. They’ve turned over half their roster in the last two years and as a result, they’re having one of their best regular seasons … ever. While I’m upset that Billy Eppler couldn’t land Robertson, what he did/didn’t do today isn’t going to sink this season by any means.