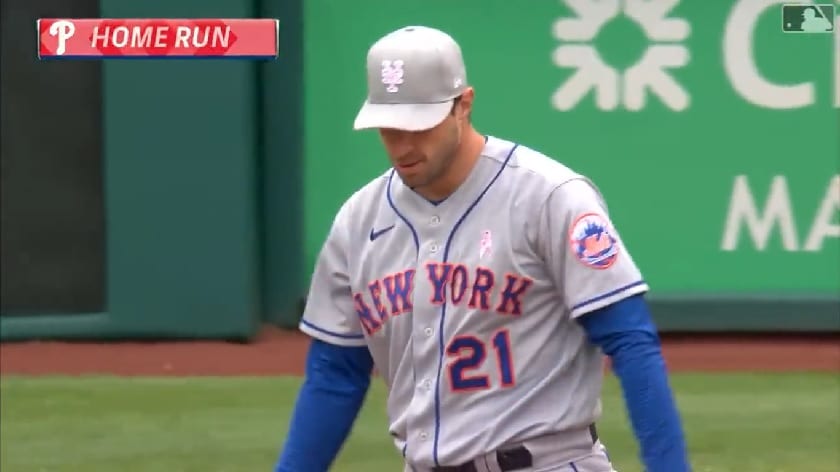 Well finally the Mets get to play baseball. But all momentum from Thursday night’s scintillating victory has apparently vanished over the past 48 hours.

Max Scherzer turned in a quality start, but he gave up a long home run to Bryce Harper early to give Philadelphia a 1-0 lead. Giving up home runs is the cost of doing business with Max. But getting dinked and dunked usually doesn’t apply to him, and that’s exactly what happened during Sunday’s Game 1. The Phillies singled Scherzer to death in the third inning to give the Phillies a 2-0 lead, and Bryson Stott flared a ball to left field in the 4th to give the Phillies a 3-0 lead. This came after Jean Segura ran himself into an out at second base as he rounded the bag too far on a single while JT Realmuto stopped ahead of him. After that it looked like the Mets would escape, but Stott’s cheapie put the Mets back on the hook.

The Mets cut the lead to 3-2 in the sixth on an RBI double play and then a Francisco Lindor RBI double. But the Mets couldn’t get any closer. Not that they didn’t have their chance in the 7th after Seranthony Dominguez walked the first two batters of the inning. Dom Smith had a terrible at bat immediately following, striking out for the first out, and Starling Marte and Luis Guillorme fared no better, going down on strikes themselves to end the inning. Jose Alvarado shut down the Mets in the 8th. After he kept missing with the sinker, Realmuto came out to visit him and then he started getting guys out with the cutter to keep them at bay.

Corey Knebel came in for the ninth inning hoping for redemption from Thursday. He struck out Pete Alonso to lead if off as Pete battled, but flailed at a fastball on the outside corner at the knees. He then got Eduardo Escobar to pop out for the second out to set up Knebel vs Dom Smith … the only at-bat to go Knebel’s way while all hell was breaking lose during that last game he pitched. Smith couldn’t change that pattern as he had a worse at-bat than the one on the 7th, striking out to end the game.

My hope was that by starting to write this post while the game was still happening would lead to another comeback, hence forcing me to write something completely different. But unfortuntately, you get to read the original draft. But good news: The Mets get to play one more time today.