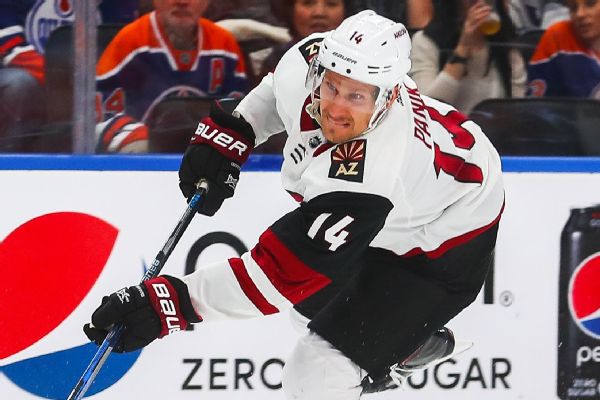 He settled in nicely with Arizona, scoring 19 points in 35 games after a trade during the 2017-18 season. In his first full season with the Coyotes, Panik scored 14 goals, 33 points and was above 50% by Corsi For at five-on-five.

He’s not a sexy player, but Panik is a solid role player in the NHL and can help a team with secondary scoring issues. Edmonton is one of those teams, and could target Panik on the open market.

The Coyotes are a total wild card this summer. They’ve been a budget team for years and will be undergoing an ownership change in the coming weeks. It also appears that the Yotes are setting their sights on some marquee names.

Arizona has been linked to Phil Kessel, Matt Duchene and, prior to his signing in Philadelphia, Kevin Hayes. If they go big game hunting, there might not be enough money in the budget to keep someone like Panik.

Panik has skill, but doesn’t consistently show it. He scored 22 goals during 2016-17 season with the Blackhawks, but that appears to be the outlier to his career. That said, Panik has settled in as a 14 goal scorer in each of the last two seasons. He’s a guy that can play a depth scoring role and chip in about 15 goals per season. That still has value.

One of his best traits is his ability to play a strong two-way game. He’s got a high hockey IQ and is far from a liability when on the ice. As a sound player at both ends of the rink, Panik is the perfect third-liner.

He doesn’t have great size, but at 6’1″ and 208 pounds, Panik is big enough to win both puck and board battles. He’s got average speed, which is sadly an upgrade over most of Edmonton’s bottom-six from a season ago.

Possession wise, Panik posted a 50.8% Corsi For percentage at five-on-five in 2018-19. On an Arizona team that struggled to create any kind of offense, that was a positive. In fact, he was +2.6% relative to his teammates.

Here’s a look at Panik’s scouting report via The Sports Forecaster.

Panik is likely surrounded at this point of his career. He’s a strong third liner that can chip in 10-15 goals, post strong possession numbers and help on the penalty kill. He’s the kind of solid role player that can make a real difference.

In Edmonton, Panik would fit perfectly on a new look third-line. I can’t help but think he could really transform the club’s bottom-six. That’s a goal of Ken Holland’s this summer.

The wild card is how the market develops, however. With less cap space than teams anticipated, perhaps Panik is forced to take a lesser contract next month.

Panik is exactly the kind of addition that I believe Holland is looking at making this summer. He’s a good depth forward that can chip in some offense, isn’t a possession drag and has the ability to play a strong two-way game. I don’t know how many times I’ve mentioned it before, but the Oilers are really lacking players like that.

If Panik comes in at a reasonable price, it would be a no-brainer for Holland to make the call and bring him to Edmonton.