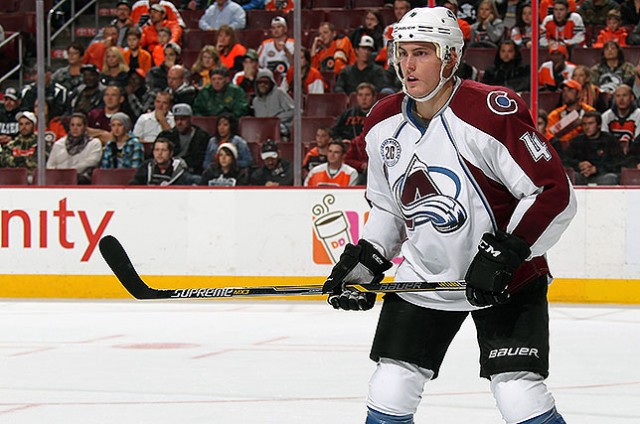 It seems like certain things just aren’t meant to be. Among those things? The Edmonton Oilers acquiring a top-four defender with legit offensive instincts. It’s been a yearly tradition since I started the ‘Off-Season Targets’ series to feature Tyson Barrie among the defenders. Today, we kick the defense portion of this series off with a look at the aforementioned Barrie.

Barrie is still very much a perfect fit for the Edmonton Oilers, and very much could be in play this summer. The Avalanche have a mind-boggling amount of young offensive defenders on their roster and in the system, and could move Barrie in order to address their secondary scoring issues.

Once again, we look at Colorado’s slick skating blue-liner as a near perfect fit for what Edmonton is lacking on the backend.

Colorado’s future is extremely bright, led up front by Nathan MacKinnon, Mikko Rantanen and Gabe Landeskog. Defensively, Cale Makar appears to be destined for greatness, while veteran Erik Johnson helps patrol the right-side of the defense. Top prospect Conor Timmins is recovering from injury, but is expected to be close to NHL ready.

Timmins, like Makar and Johnson, is a right-shot defender on a Colorado team that is loaded with them. It’s not outrageous to think that Makar and Timmins are the future in Denver, with Johnson locked up until the summer of 2024.

That puts Barrie in an awkward position. He’s entering a contract year and very likely won’t be re-signed by the Avalanche in 2020. Would Colorado maximize the value on Barrie knowing that Johnson and Makar can handle the top-four duties this coming season, and knowing Timmins is close?

It certainly makes a lot of sense for Joe Sakic.

Throughout his entire career, Barrie has been the best offensive defender in Denver. That won’t be the case much longer. Makar, based on his postseason play and his NCAA career at UMass, appears to be a franchise defender in the making.

That doesn’t mean Barrie is a nobody or that he’s magically become a bad player. In fact, Barrie was terrific for the Avs this past season.

He fired home 14 goals and tacked on 45 assists to finish the season with 59 points in 78 games played. Although he finished a -3, Barrie had one of his best possession seasons, posting a 53% Corsi For.

Barrie handled a top-four role for the Avs, averaging 21:47 TOI-per-game. That said, Barrie’s usage was very beneficial to him as head coach Jared Bednar started him in the offensive zone on 64.1% of his shifts. That was up just about 8% on his overall career mark.

Barrie’s puck moving ability is his bread and butter. Combine that with his speed and ability to carry the puck from defense to offense and he’s a perfect fit for the modern game. His first pass is extremely strong as well, and would be lethal when Connor McDavid or Leon Draisaitl is on the receiving end.

Tyson Barrie is absolutely a top-four defender in the NHL, and is a guy that can quarterback just about any team’s top powerplay unit. I think Barrie is best suited to a second-pairing role as a number three defender, but with a strong partner I could see him succeeding on a top pair.

In Edmonton, Barrie would be the club’s best right-shot option, edging the stay-at-home Adam Larsson. Although Larsson has solid chemistry with Oscar Klefbom, which could allow Barrie to play on the second pair with Darnell Nurse. Either way, Barrie would comfortably be in the top-four and would be Edmonton’s most potent defender on the powerplay.

Barrie has just one season remaining on a contract that pays him $5,500,000 annually. That’s a pretty big cap hit, and it’s uncertain if Edmonton would be able to pay him the required raise a year from now. Even now, fitting his salary in would require some work.

The simplest way, defensively, would be for Barrie to replace Andrej Sekera. Colorado doesn’t really have a need for Sekera, and I’m not sure if there will be a big market for the oft-injured defender. The deal that makes the most sense?

A one-for-one (sorry) trade that would ship Ryan Nugent-Hopkins to Colorado for Barrie. The Avalanche help their secondary scoring, while Edmonton gets that defender they so badly crave. The money makes a lot of sense too, with the Oil actually clearing out $500,000 in said deal.

For the record, I wouldn’t deal Nugent-Hopkins for Barrie. Edmonton simply doesn’t have enough NHL forwards to be dealing them off without another coming back in return. Plus, there is no guarantee that Barrie re-sings with the club. It could be a disaster.

On paper, Barrie is a perfect fit for the Oilers. His style and the club’s needs mesh together so well that it’s almost a no-brainer for Ken Holland to aggressively pursue Barrie this summer. That said, Edmonton would have to deal assets for a player they already have in the system.

It won’t happen this season, but Evan Bouchard will eventually fill a top-four role for Edmonton as a high-level puck mover and powerplay weapon. Patience is the smarter approach here.