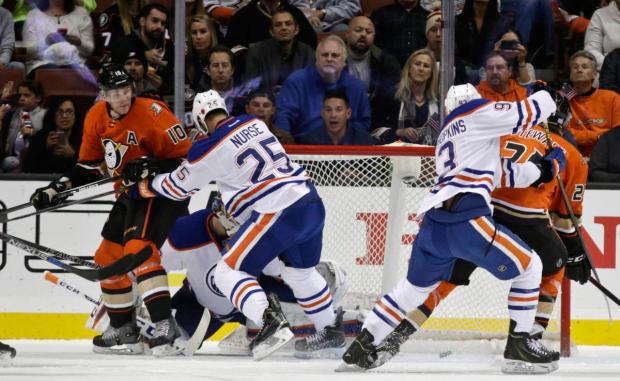 When I initially saw Edmonton’s bye week on the docket for mid-January, I figured this would be a nice week to sit back, evaluate what needs to be addressed and take a look at trade deadline targets. Unfortunately, a lot has changed since the end of June when the NHL’s schedule came out. Edmonton has had a disastrous first half of the season, and sits at 20-23-3 through 46 contests.

Edmonton can’t catch any playoff teams by the All-Star game, in fact they can only catch the Ducks if they lose every game between then and now. The odds of that? Highly unlikely. That said, Edmonton can get back into striking distance with a strong three game stretch before the break.

The Oilers will host Vancouver, Buffalo and Calgary in a five day stretch starting on Saturday night. Edmonton hasn’t been good at home by any means, but Vancouver and Buffalo are two of the worst teams in the NHL and the Oil have owned the Flames over the last little while.

The Oilers have to win two out of those three games, but winning all three could get them to somewhere around six or seven points back by the break. Is it ideal? No, it isn’t by any means, but it will keep some hope alive heading into February. At this point, that’s all we can really hope for.

Edmonton has lost their only meetings to Vancouver and Buffalo this season, but I’d argue both are playing much worse hockey this time around. The Oilers are going to have to show up and be ready to roll for those two contests to keep hope alive in Northern Alberta.

What a two game run by Darnell Nurse heading into the break. Nurse scored twice in Arizona on Friday night and was the best player on the ice not named McDavid. On Saturday night, he played another strong game and scored the game winning overtime goal. I think Nurse has taken another step forward this season, and I believe he’s emerging as a top-four option right in front of us.

Now, we need to be careful because defenders don’t develop in a straight line as Lowetide likes to say, but these are good days for Mr. Nurse. He’s playing strong hockey and was rewarded in a big way for his improved offensive game this season. Interesting to see that Nurse has 18 points on the season and now leads all Oiler defenders in that regard. I’ve noticed he’s been a lot more active in the offensive zone this season and has been willing to shoot the puck a lot more.

Nurse’s development this season has been one of the very few bright spots for the Oilers. Again, I’m not saying we should bank on it going even further next season, but Nurse should be able to complement Oscar Klefbom and a healthy Andrej Sekera to give Edmonton a damn good left-side of the defense next season. Now, let’s get that contract figured out.

Edmonton spent a majority of the season trying out players in positions without much success. Matt Benning couldn’t crack the team’s top-four on defense with Andrej Sekera out, Anton Slepyshev never got a good look in the top-six forward group, Drake Caggiula couldn’t crack it in the top-six, while Kailer Yamamoto fell just short of the mark in an impressive first chance.

That said, the Oilers need to have more tryouts in the next half of the season. The club needs help on the powerplay, so that is where we should start. Jesse Puljujarvi is, without a doubt in my mind, the team’s most dangerous winger. Play him on the powerplay the rest of the season. You have nothing to lose and if he works in this spot, it is one less issue to worry about come summer time.

Speaking of the powerplay, Darnell Nurse needs to see time on this unit. Oscar Klefbom, to me at least, is Edmonton’s best option on the man advantage when healthy. Other than Klefbom? Andrej Sekera can play this role but that’s really it. Offense isn’t Nurse’s calling card, but he does have a big shot and has looked improved in this area of the game all year long. Give him a tryout in this spot for the rest of the season and see if he can be that big point shot the team badly needs.

Lastly, bring Iiro Pakarinen and Ty Rattie up from Bakersfield and let them play. Pakarinen is a fine penalty killer and the Oilers are desperate for help in this area. As for Rattie, Edmonton is the worst team in the NHL when it comes to offense from wingers. Is he the answer? Probably not, but he’s an All-Star at the AHL level and you invested in him this summer, you may as well get a look in a (likely) lost season.