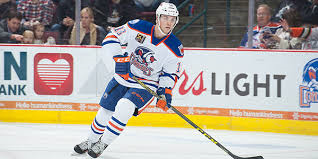 Following last night’s preseason defeat to the Carolina Hurricanes, the Oilers have made another wave of cuts. The club has assigned two players to the AHL’s Bakersfield Condors, and have placed two players on waivers for the purpose of assignment to the Condors.

Forward Patrick Russell and goalie Nick Ellis, both second year players, were sent directly to Bakersfield and will report to Condors camp tomorrow. Ellis had a strong rookie year and is expected to carry the load as the starter this season in the AHL. It’s a big year for Ellis, because another strong campaign could set him up for a real shot at the backup job in one year’s time. He’s a legit option for the future for this organization.

As for Russell, he is under some pressure this year. He put the puck on net a lot in the AHL a year ago, but rarely found the back of the cage. It’s imperative he has a better sophomore year and pots at least ten goals for the Condors. Failure to do so could result in the end of Russell’s time as an Oiler prospect.

Dillon Simpson and Ty Rattie could be joining these two in Bakersfield as early as Thursday, as both were placed on waivers for the purpose of assignment. I suspect both will clear waivers and be assigned, but I do think there is a slight chance that Rattie gets picked up off waivers.

There are a number of bubble defenders on waivers or available around the league so I suspect Simpson slips through here. I think he’s awfully close to being an NHL’er and I do think we will see him back here again at some point this season. Simpson can provide steady play in a depth role and I do think that is valuable.

I suspect he’ll go to Bakersfield and play a big role for the Condors, likely mentoring young defenders Ethan Bear, Caleb Jones and Ryan Mantha while leading the defensive group on the ice.

As for Rattie, he should be a top line winger for the Condors and be their most lethal goal scorer. We know he can produce at the AHL level and I suspect he will be a huge part of Bakersfield’s offense this season. Like Simpson, I suspect we see Rattie back at some point during the year. He’s likely Bakersfield’s best veteran forward and will be the top call-up option.

None of these cuts are really a surprise. The biggest surprise is that Kailer Yamamoto is still on the roster, and on merit. He’s earned a longer look in camp and I’d argue he has earned a nine game regular season look. In the final two preseason games, he’ll without a doubt be a featured player and the biggest story.

The last real battles of camp are between Yohann Auvitu and Mark Fayne for the seventh defender spot, and Chris Kelly and Brad Malone for the fifth center spot. I’ll bet on Auvitu and Kelly, although I think Brad Malone has beat Kelly out to this point.