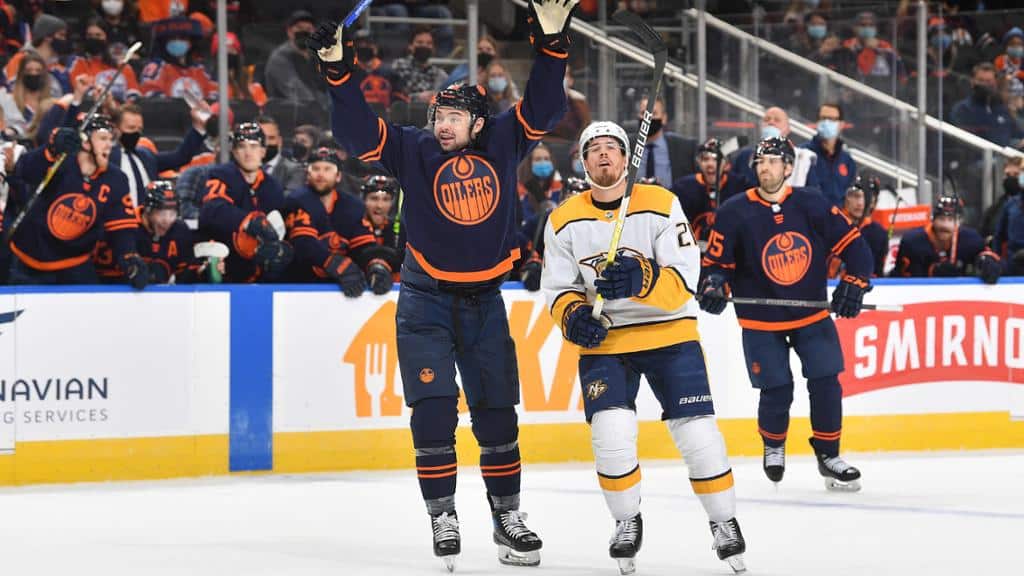 For those into extracurricular toughness the scene that unfolded between, among others, Kane and Hartman at the end of the last game against the Wild was a good example of what Kane brings to the table beyond his top line forward skillset. To not go quietly into the night, instead as the clock wound down in a 5-1 loss Kane came to the defense of Yamamoto, drawing a melee involving top players on either side.

Sure, Hartman was quick witted to shift the focus back into the Oilers after Kane set the scene with a strong quote, but ultimately details like these matter to the players and the importance of that in itself should not be discounted. As the intensity increases, as the race for seeding ensues, and as the playoffs loom large things are sure to get heated. Some have been critical of the Oilers missing this type of edge, but regardless the kerfuffle is likely a good sign in this department so long as the team can use it as a rallying point going forward. It is certainly more positive than the result against the Wild.

All that aside, the Oilers find themselves continuing their road trip into Nashville to take on a Predators squad that has some snarl of its own. It’s interesting to think that these teams have such similar records this season and most would say the Preds have done quite well to continue their strong play dating back to the middle of last season. Highlighted by the outstanding play of several elite players the Preds have managed to maintain a relatively stable hold on a playoff spot all season.

Although qualifying for the postseason seems likely for both of these teams there is some pressure in the Western Conference playoff race. Both the Oil and the Preds should be bringing their best efforts tonight, which should make for a highly competitive game. We’re expecting to see Smith get the start for the Oilers while Saros starts for the Preds.

74 games into the season with a relatively stable lineup and it’s true, there’s not much new I can add about the Oilers specific to tonight.

McDavid has no points in his last 2 games, while Draisaitl has but 1 point in his last 3 games. At some point the floodgates will open for the star duo who have a history of torrid scoring stretches to end the regular season. It’s already incredibly rare that their scoring has dried up as long as this, so it might very well be tonight that the superstar duo get back to their dominant ways.

It is definitely a blessing to have such nice centre depth, but I can’t help but feel McLeod would be an upgrade to the top 9. For now it makes sense to keep everyone’s minutes managed rolling 4 lines, but in the playoffs the bench will be shortened and I’d expect McLeod finds his way onto the wing somewhere higher in the lineup.

After missing most of the first half of the season Smith has started to settle into his groove. No doubt he’ll have to maintain strong results the rest of the way to earn the potential for playoff starts, but in all honesty it makes most sense to me for the Oilers to consider employing a more unconventional sharing of the net in the postseason. I know neither Smith nor Koskinen wants to admit it (as they shouldn’t) but both operate at their best with a bit of rest.

Getting more than 50 percent of the starts is likely not the recipe for success for either at this point, and that’s alright. Yes, they won’t be splitting the Vezina anytime soon, but each of the pst 3 seasons they have taken a lot of flack as the consensus around the league is that they are not good enough to get the job done. Granted, the Oilers haven’t one the Cup, but it’s worth noticing that the tandem of Smith and Koskinen has not been the reason for the Oilers demise over that time.

As I mentioned in the opening, and as those who have checked in on the Preds have noticed, there have been some outstanding performances that have buoyed the team this season.

Filip Forsberg is one of the league’s top wingers and is having a banner year with 38 goals so far. Johansen has long been the centre on this top line, but tonight the duo will be joined by Tomasino, as the young forward gets a look in a more featured role. Tomasino has posted strong results in limited minutes in this, his rookie season, and certainly has the speed and skill to upgrade this top 6 if he’s ready for the usage.

Matt Duchene has 38 goals on the season as well, a fantastic year by his standards after switching to the wing during his time in Nashville. Granlund has had an even bigger resurgence after a down year, playing huge minutes after it seemed as though his best days might have been behind him. Similar to the Forsberg line, this duo will be joined by a younger player looking to make his mark in Tolvavnen. The Finn has a great shot but has been oft criticized by his inconsistency and perimeter focused game. That being said he is still young and could very well come into his own with a true top 6 opportunity such as this.

The 3rd line is emblematic of the Preds overall philosophy, as can be seen in much of their drafting process when it comes to forwards. Jeannot, in particular, has had a breakout season, which might be his best when it’s all said and done given his absurd shooting percentage. Time will tell, but for now this is a big, heavy trio that plays at maximum effort and has enough skill to chip in. Sissons and Trenin are no slouches in their own rights, but this line is a lot more about a willingness to do whatever it takes to win versus one built off of offensive talents.

Even the 4th line has some interesting options tonight. Glass was a high draft pick of Vegas but never quite worked out. As evidenced by his slotting tonight he still hasn’t bloomed into the skilled centre that was projected on his draft night, but he’s posted huge numbers in the AHL showing that there is some talent there. Kunin and Cousins fit the Preds template of big, physical, intense forwards.

Certainly the greatest standout of them all is captain Roman Josi who is having perhaps the best year of his career. With an astounding 87 points already the Preds star is more than just an offensive force and is relied upon in all situations, playing in the rarefied air of 25+ minutes per night. No doubt that he is the favourite for the Norris at this point. Fabbro has been a solid partner and has certainly done well to hold up in big minutes.

Ekholm is the other holdover from the Preds Cup run in 2017, and still provides a high level of play on the back end. His strong defensive play anchors the 2nd pair behind Josi, while Carrier provides a more offensive lean that is well supported by his veteran partner.

Lauzon is a deadline acquisition that should be able to jump up to either Josi or Ekholm’s pairing if need be. He was great in Boston alongside McAvoy and was solid in Seattle. He has the toughness and abrasion one would expect from a former Bruin. Borowiecki provides a lot of the same despite his limitations outside of that, his manning of the left side behind his star teammates ensures that he will not have to be relied upon more than he can contribute.

Saros is fully coming into his own after a few years splitting the crease with Rinne. There have been some bumps along the way across the passing of said torch, but that much can be expected with the volatile nature of goaltending. At this point Saros has the technical ability and experience to make up for his unconventionally small stature, making him a unique netminder for the current state of the league. He continues the tradition of strong goalies in Nashville that dates back at least as far as Tomas Vokoun.