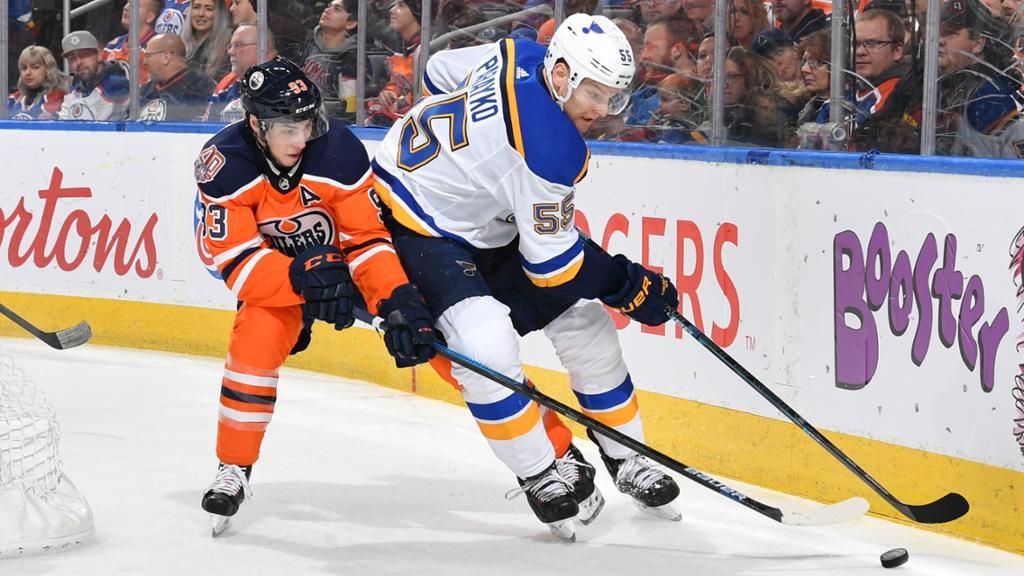 It should be a highly competitive game between 2 playoff teams tonight as the Oilers host the Blues. Time is running out on the regular season, and both teams are looking to round into a more complete form as the days grow longer. Both appear to have a small cushion above Vegas and Winnipeg, also known as the playoff cut line, but an ill timed slump could be disastrous for either.

It seems that both teams will be giving the start to their less impressive option on the season, as Smith and Binnington have been steadily outperformed by both Koskinen and Husso respectively. With such slim margins for error both teams will need their tandems to be in check, as it would hardly be considered shocking to see all four netminders to see playoff action.

Standing position and uncertain goalie situations are not the only similarities these two teams share either. Smith and Binnington should have their hands full tonight as the Blues and Oilers are two of the higher scoring teams in the league. Both teams have been spreading icetime more evenly across increasingly deep forward groups. Both have extremely potent power plays.

St. Louis: Breakout player Kyrou is likely out with an illness.

There was some talk about who is a better player, Kane or Puljujarvi. The two are at different stages of their careers so it might be difficult to compare. Regardless, both are extremely good values as important contributors at low cap hits and appear to form the endgame McDavid line for the season. This line has been together for a few games now and doesn’t appear to be changing in the near future. The same can be said for the Draisaitl unit, as Leon has a good chance to join McDavid at the 100 point plateau over the weekend.

Brassard continues to forge some chemistry with RNH. Meanwhile Kassian gets back into the fold providing some of the abrasiveness his linemates appreciate. Kassian’s been at his best with RNH this season, using his size to win space in front of the net for tap-ins off of his centre’s strong passing skills.

The Oilers are deep enough that there is a lot left over for the fourth line. It almost feels incorrect to refer to it as such, mostly thanks to the outstanding play of McLeod who is likely deserving of a spot higher in the lineup. It is a good problem to have. Foegele has held up his end of the bargain performing at a reasonable level for a 3rd line type of winger.

The blueline appears to be solidifying into this configuration. The good news is the addition of Kulak has worked quite well, as his pairing with Barrie is earnestly pushing Keith-Bouchard for minutes. His size and movement skills join Nurse and Ceci as defenders with the strength and range to be effective defensively, a much needed balancing given the more skilled contributions of the other half of the blueline, Keith, Barrie, and Bouchard.

It’s very tired to say that the past few years have been long, but we are coming up to the 3 year anniversary of the Blues winning the Cup. A lot has changed and changed again since then, but one thing that hasn’t is the Blues putting Perron on O’Reilly’s wing. This latest stint with the Blues, the past 4 seasons or so, have been among if not the best of Perron’s career. The duo now has Saad on the opposite flank, providing some straightforward ruggedness that the likes of Sammy Blais has brought in the past. No doubt a defensively responsible line for the Blues to lean on for some offence as it’s possible all 3 players hit the 20 goal mark this season.

To contrast, the 2nd unit has a more offensive slant to it, largely thanks to the healthy and rejuvenated Tarasenko. Buchnevich has been quite good for the Rangers the past few seasons and is continuing that trend to much more fanfare this year. Between them is Robert Thomas who has been spectacular after a relatively uninspiring level of play last season. The young centre has finally started to come into his own and has been carrying his weight in this role with two strong wingers.

Schenn still gets a significant amount of icetime despite a lower slotting in the lineup. It’s slightly concerning that his flow of play metrics have taken a step back, but he’s still managed to post strong production. Specifically a large number of his points are of the primary variety. Barbashev has had a career year moving around this lineup, while Toropchenko is still getting his feet wet in the league, taking Kyrou’s spot here.

Logan Brown is an intriguing player. Once a high draft selection the towering centre never seemed to get a long look on the Senators roster. The fact that he’s still low in the lineup means that the Sens weren’t far off in thinking he wasn’t ready, but often bigger bodies take longer to develop and perform better with more icetime. The hometown boy might still have a chance to blossom into a top 6 centre in the next couple years, but for now he is but a bottom line player with some offensive skills. MacEachern is a big, surly customer, while the Aussie Nathan Walker has been outstanding in a limited role this year, including a hat trick in December.

Leddy was the Blues addition to the defence at the deadline, providing some much needed puck moving skill to a blueline that is certainly missing Krug (injury). Although Scandella has been partnered with Parayko most of the season, Leddy or Krug would be more conventional a fit. Parayko does have some offensive skill and isn’t afraid to jump into the rush, but his skating and size are his greatest assets.

Justin Faulk had been quite good this season, perhaps unsurprisingly as the defender has posted great results dating back to his time with the Hurricanes. He has been with Krug most of the season, forming an offence-leaning pair.

Bortuzzo is a rough and tumble character, a nice contrast to his partner Rosen who does have some offensive abilities. Rosen is clearly the odd man out once Krug is able to return, but remains a reasonable option as a depth defender.