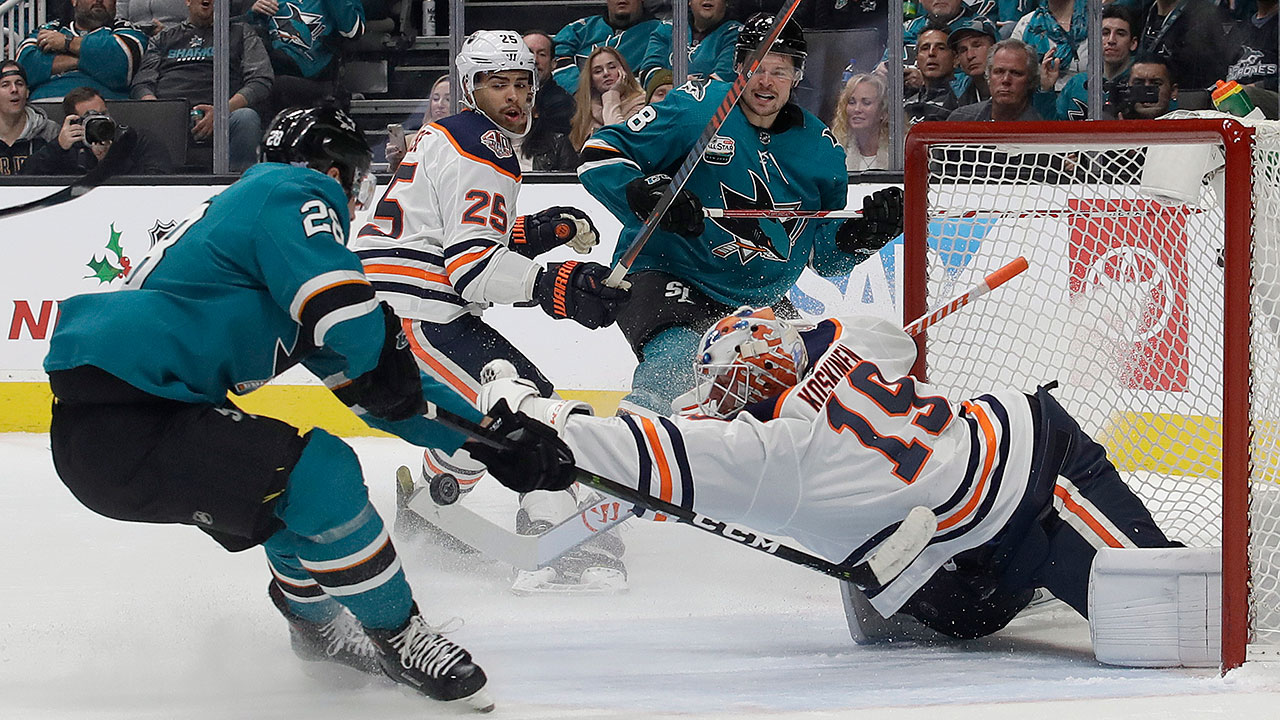 For the Oilers, 12 games are all that remain on the regular season schedule. The strong rounding into form that has taken place in the last third or so, since the coaching change, the all-star break, or the Kane signing, punctuated by a 7-2-1 stretch in their last 10, has seen the Oilers rise from jockeying for a Wildcard spot to now pushing the Kings for 2nd in the division. With a chance to pass the Kings outright with a win tonight the Oilers head to San Jose to square off against a lesser opponent in the Sharks.

As Vancouver and Winnipeg all but fade out of the playoff race it seems as though there are 9 teams going for 8, meaning that only one team will find itself on the outside looking in when it’s all said and done. The Oilers are not only building a nice cushion for themselves, but have a realistic shot to earn home ice and to be favourites to win a first round matchup. More importantly the team looks quite strong, the state of their game looks to be headed in a direction worth believing in, and the overall level of play is as strong as it has been during the McDavid era.

In all likelihood the Oilers will face off against one of the Kings, the Knights, the Flames, or the Avalanche in the first round. There are no easy opponents, especially in that group, but staying above the Wildcard spots and avoiding divisional leaders (Flames, Avs) in the first round is likely motivation enough to keep the Oilers locked in and focused on finishing the season strong. Naturally, given the lack of playoff success during the McDavid era none in Oil Country should feel entitled to an end of season complacency or malaise.

Meanwhile the Sharks are out of the picture, playing out the final days of the season. There are some reasons for optimism going forward, but no doubt the Sharks will have to find ways to upgrade their roster over the summer.

It seems we’ll see Koskinen and Reimer start for their respective teams.

With the recent string of strong performances it’s not surprising that we see the Oilers run back with the same, or at least a similar starting lineup. The forward group is as good as the league has to offer, from the stars to the depth it’s an area of a high enough quality that the Oilers should have a shot to beat anyone.

On top of that the chemistry between several of the lines is significant enough that the group has a certain synergy. It is almost hard to believe that a lot of the conversation around this team in the offseason was surrounding the separation of McDavid and Draisaitl to hopefully transform into “more than a one line team”.

At this point it almost feels insulting to call this Foegele-McLeod-Ryan unit a fourth line, in particular because of the amazing growth in McLeod’s game since last season. Should the Oilers attack require a shake up it’s hard to imagine the elevating McLeod won’t be among the first options to consider.

At times I have been critical of GM Holland’s work as Oilers GM, but it’s important to acknowledge some of the investments that have paid off in a big way. Both Ceci and Kulak have exceeded expectations for the club, and been capable, stabilizing forces on a blueline that has a plethora of riskier, or at least more offensive leaning options. Both have the size, strength, and skating ability to be quality NHL defenders, and so long as their decision making within Woodcroft’s system is sound we’ve seen how they can provide the blueline with enough balance to power a positive flow of play in the Oilers favour. This allows the Oilers elite forward group to spend more time on the attack and affords the goaltending a more reasonable workload.

The Sharks have some reasonable building blocks up front, but lack a certain amount of depth to support a dangerous, consistent, and multi-layered attack. Hertl, Couture, Bonino is a very reasonable centre lineup. Meier is a legitimate top line winger. Even Barabanov has enough quality to be a secondary scoring option.

Outside of that the Sharks are a bit underwhelming, or at least unproven, up front. The remainder of the season represents as good an opportunity for some of these younger players to position themselves for a role in the future as they might ever get moving forward. Chmelevski, Gregor, Leonard, Gajdovic, and Balcers all have some shot at proving themselves worthy of a bigger role, but by no means are any of them sure bets to be contributors for the strong team the Sharks will be striving to become next season.

The defence pairings are all classic offence/defence unions. The right side of Burns, Karlsson, and the young Merkley are as talented and skilled a right side in the league. Perhaps as Merkley comes into his own the passing of the baton between he and the older Burns will be relatively seamless.

Their partners are all more conservative defensive players. Ferraro has had a nice couple seasons in such a role and is still in his mid 20s. Megna has held up reasonably with Burns. Vlasic is not what he once was but at least provides an ideal partner for Merkley to find his way through the early segments of his NHL career. For these 3 success is measured by giving their partners the stability to look good, more so than earning an individual reputation. It’s likely the left side of this defence will be an area which many will suggest the Sharks will need to upgrade to be successful, but there is a chance that any or all of these three can extend their stay with the franchise long enough to be part of the brighter days they are hoping to find.