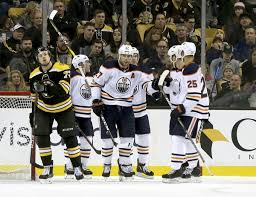 It seems like it has been forever, but the Edmonton Oilers are finally back tonight. They’ll play their second game of the season in Boston as they make their lone visit to the TD Garden. This is the first of two meetings between the teams this season, who will finish the series next Thursday night in Edmonton.

The Oilers had won five straight against the Bruins prior to last season’s 3-2 loss in February when the Oilers blew a 2-0 lead in the third period. In Boston, the Oilers have won three straight games, including the last two in regulation time.

Cam Talbot gets the start for Edmonton, while Jaroslav Halak gets the nod for the home team.

Edmonton: Urgency. The Oilers absolutely need to show some urgency tonight and prove that they weren’t just talking the talk all camp to take the heat off. They need a strong effort tonight and have to push this strong Boston team from the opening faceoff. Show something tonight, because this Boston team hasn’t exactly been playing great hockey so far.

Boston: Assert your speed and skill game. The Bruins aren’t usually known for playing a fast and skilled style, but that’s exactly what they do under Bruce Cassidy. If the Bruins can get rolling early against a weak Edmonton defense, they should be able to create ample scoring chances and, by extension, goals.

Edmonton: Milan Lucic scored a goal and tallied an assist in the season opening loss Satruday afternoon. He looked pretty good overall, and I thought he was the best forward not named McDavid for the Oil. Lucic has said all the right things, and you know he’ll be amped up to return to Boston and play against his old team.

Boston: Charlie McAvoy is one of the best young defenders in the NHL today, and will likely be tasked with shadowing Connor McDavid in this hockey game. McAvoy burst onto the scene with a very strong rookie campaign, and the hype surrounding him here in Boston is amazing. He’s a player worth your time, and Oiler fans should keep an eye on him tonight.

Todd McLellan sent Twitter ablaze yesterday with the line combinations he tossed out during practice. It doesn’t sound like all those changes will stick, however. What will is that Kyle Brodziak is a healthy scratch, while Jujhar Khaira shifts to center. Jason Garrison, skating on the third pairing in practice, will once again sit along with Alex Chiasson.

The Bruins will also be trying some new line combinations tonight, as free agent addition Joakim Nordstrom jumps into the top-six. Ryan Donato will take a seat tonight as a result, while the B’s will also be without Torey Krug, who is on IR.

The Oilers have won three straight games in the TD Garden, their longest streak in the building since it opened in the 1990’s. The club is trying to win their sixth game against Boston in seven tries. That would be their best regular season stretch against the Bruins in franchise history.

Jaroslav Halak is making his Bruins home debut tonight. He’s appeared in two games so far, shutting out Buffalo last Thursday night after appearing in relief for Tuukka Rask on opening night. Boston signed him from the New York Islanders on July 1st.

The Oilers are looking to avoid their first 0-2-0 start since 2015-16, when they lost to St. Louis and Nashville in each of their first two contests, also on the road.