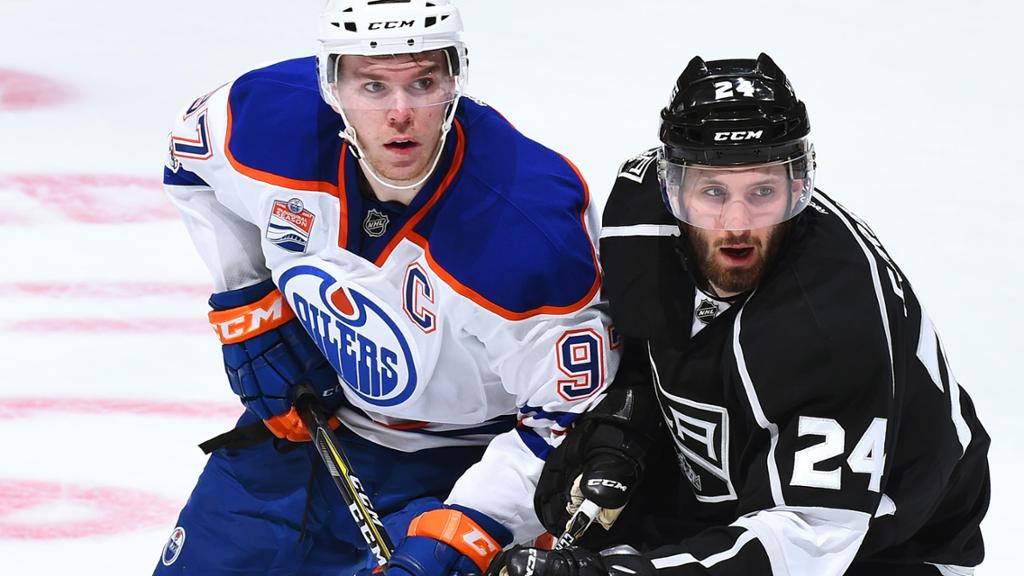 Call Kenny Loggins, because the Edmonton Oilers are about to ride into the Danger Zone. Tonight, the Oilers kickoff an absolutely vital back-to-back set in Los Angeles as they take on the Kings for the third time this season. Edmonton, who is four points out of a playoff spot, will be in Anaheim tomorrow night to take on the Ducks. I’d argue three points is vital.

Edmonton and LA have split the first two meetings this season, with the home team winning each of those contests. The Oilers will need that streak to snap tonight if they hope to make a run back towards a playoff spot this month. The Kings, meanwhile, are just trying to rebound after being embarrassed by Tampa Bay Thursday night.

Mikko Koskinen returns to the net for Edmonton after a sensational outing Wednesday, while Jonathan Quick is the expected starter for the Kings.

Edmonton: Be ready from the opening faceoff. The Oilers played a putrid first period in the desert Wednesday, and nearly lost that game in the first twenty. Tonight, against a pissed off Kings team that will certainly be looking for a better effort, Edmonton needs to be ready to roll. They’ll find themselves in an early hole again if not.

Los Angeles: Be hard on the forecheck. The Kings are not a sexy team at all, but they are a big team and a tough one at that. Against a banged up Edmonton defense, LA could find themselves in favorable offensive spots by pressuring Edmonton’s lackluster defense with a strong forecheck.

Edmonton: Leon Draisaitl has a chip on his shoulder after not being named to the NHL All-Star Game. He was all over the place on Wednesday night, and I suspect he shows up with another solid effort tonight against a Kings team that plays to his strengths. Leon is going to be key if Edmonton hopes to win this game.

Los Angeles: We all love to hate him, but Dustin Brown has been very good against the Oilers this season. Brown is tough on the forecheck, makes the best players uncomfortable, and has found the back of the net with ease in this season series. I suspect he is a pain in the ass once more tonight for Edmonton.

Kris Russell is close, but according to Jack Michaels he still isn’t ready to go. He’ll be joined in the pressbox by Matt Benning, who is returning from his grandfather’s funeral. Kevin Gravel draws in on defense as a result. Up front, Joe Gambardella will sit while Ryan Spooner draws in on the fourth line at left wing.

The last time the Oilers were in LA, Ilya Kovalchuk was playing on the fourth line. Tonight, he’s expected to see time on LA’s top trio. Sean Walker will draw in defensively, while Brandon Leipsic is a new face up front for the Kings.

This is the third of four meetings on the season between the division rivals, and the final trip to LA this year for the Oilers. The sides will conclude the season series on March 26th in Edmonton. As mentioned above, the home team has won each of the first two meetings between the teams this season.

A key stat for a possible good start tonight for the Oilers? LA’s worst period this season is their first period, where they have lit the lamp just 22 times all year. The Kings’ powerplay has also struggled this season, checking in with a 15.3% conversion rate.