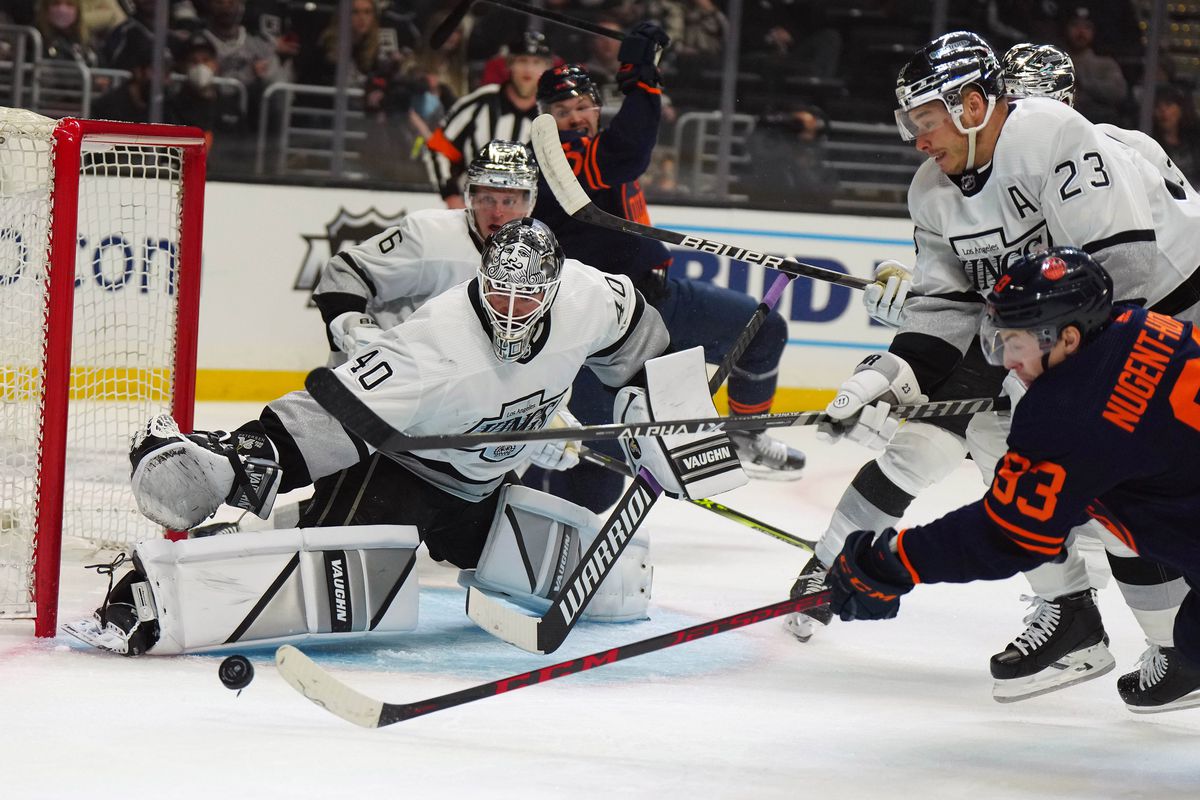 Believe or not spring is in the air. As the days get longer and the weather gets warmer the hockey is starting to heat up as well. Tonight we’re in store for as interesting a matchup as one could draw up as the Oilers host the Kings.

As it stands, the two would face off in a first round playoff series, although there’s still a lot to sort out until then. The Kings are just ahead of the Oilers in divisional standing. If nothing else the Kings far outlasted the Ducks to take their place as perhaps the most surprising team performance. Even though their prolific prospect pool is starting to graduate players into the starting lineup, the Kings fortunes were greatly enhanced by some key additions over the past season or two.

This should be a highly competitive affair as both teams reintroduce themselves as potential playoff foes. Even if the game is a blowout either way both teams will likely be trying to make a statement for the battles to come.

We’re expecting to see Koskinen in net for the Oil while Peterson looks to get the nod for the Kings.

The Oilers return with a lineup that performed quite well over the lowly Coyotes. McDavid and Draisaitl are well supported by strong linemates. Both should see a lot of Kopitar and Danault tonight and in any subsequent games between the two teams.

The Oilers could have a huge advantage as we go deeper into the lineups as both the RNH and McLeod lines are strong. McLeod in particular continues to impress and this might be the last stretch we ever see him outside the top 9. He has been among the biggest and best surprises for the Oilers this season, and his development not only enhances the lineup but also takes a lot of pressure off some of the other centres in the organization, namely RNH and Dylan Holloway.

The blueline is settling into this configuration as the standard, signalling the coaching staff has felt comfortable with what they’ve seen to this point. Newcomer Kulak has shown nice synergy with Tyson Barrie, looking to be a solid deadline acquisition. Likewise, if a reshuffling occurs he might work equally well alongside Bouchard for the same reasons, although Barrie certainly appreciates the size.

There is certainly the feeling that this is a new beginning in L.A., the start of something quite special. With tons of prospects en route, and many playing big roles already, optimism is beaming. The Kings have done well in being in a playoff spot at this point, but look poised for even greater heights before they are through.

Maybe he isn’t quite the player he was in the Cup years, but Kopitar still has lots of game yet. He did a lot of heavy lifting through some lean years but it’s all paying off as he’s leading a competitive outfit once more. Iafallo has been a pretty consistent linemate and as expected in such a role his play is regarded by many metrics. Kempe is having a breakout offensive season, leading the Kings with 28 goals, a fact perhaps lost amidst all the other exciting happenings.

Danault is proving once again that his dominant flow of play differentials are no fluke, he is no doubt one of the league’s elite defensive centres. Trevor Moore has been outstanding on his wing, a late bloom into legitimate top 6 production. He plays with a lot of compete, a style coaches and fans can appreciate just the same, stylistically similar to Hyman in a sense. Arvidsson is gritty and intense in his own right, but is a dangerous shooter who has scored 30 before. This line has been dominant both ways.

Byfield is still quite young, even within his own draft year, and with the OHL being shut down last season his developmental path was likely altered from ideal. At this point he’s playing in a limited role, one that is nice for him to gain some experience while Kopitar and Danault are more than capable of doing a lot of heavy lifting. It’s likely a matter of a season or two until he’s pushing to be the top centre on this team, especially offensively. He can use his size and passing skills to make plays off the cycle, but is extremely dangerous off the rush thanks to his speed, hands, and shot. Both Vilardi and Kupari are offensively gifted forwards still looking to find their way in the league. The trio is high on skill but might be prone to some growing pains.

Grundstrom and Andersson both have some snarl to them, fierce competitors who aren’t afraid to get a bit abrasive. Meanwhile their linemate Kaliyev is a uniquely talented sniper. A clean shot from anywhere is as dangerous as anyone’s on the ice tonight. Despite this he’s still found himself low in the lineup at even strength, but he’s still growing into his game.

Perhaps the most surprising aspect of the Kings turnaround is what has occurred on the blueline. Despite Doughty being out things are looking quite good thanks to the unexpectedly strong play of some young players.

Bjornfot is young but plays with poise and awareness. He looks to be a strong but quiet presence for years to come as he’s worked his way up the lineup over his first two seasons. Durzi has taken a big step this year, taking on huge minutes of late. He’s got offensive skills and can use his speed and passing to spring the attack.

Maatta and Stetcher are a clear shutdown pair. Two players that are somewhat unheralded despite having a lot of NHL experience between them. Both have shown some signs of being strong defenders, although having responsible centremen like Kopitar and Danault would certainly help them go against some of the league’s better offensive players.

The third pair is made up of two rookies. Moverare is a more defensive presence while Spence has continued to impress since his draft year, definitely the more offensively talented of the duo. Both are still in the early stages of their careers, and likely aren’t in the lineup if the Kings weren’t missing 3 regulars with injury (Doughty, Anderson, and Walker), not to mention Roy who has been out all season. That is unless the young duo continue to expand their games and impress the coaching staff.

The Kings have split starts between their goalies fairly evenly, Quick outpacing Peterson 37 to 30 in starts. It’s likely that Quick will be the go to for a playoff series at this point, although their performances have been quite similar over the year.