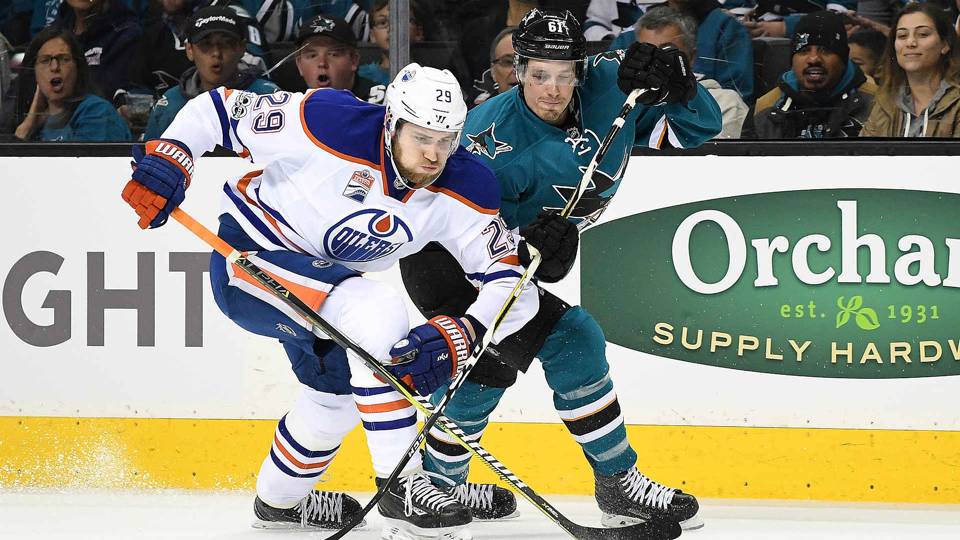 Edmonton’s three game road trip through California comes to an end tonight in San Jose, where the Oilers will battle the Sharks for the third time this season. After exciting wins in LA and Anaheim on the weekend, the Oilers will go for the California sweep in their second visit to the Shark Tank.

Pontus Aberg, acquired on Sunday from Nashville, is with the team and will make his Oilers debut tonight, while the club recalled defender Ethan Bear from AHL Bakersfield earlier this afternoon. Of course, the Oilers traded Mark Letestu and Patrick Maroon in the last 48 hours, significantly changing the complexion of the club’s roster.

Cam Talbot will start for the Oilers, while Martin Jones gets the nod for the Sharks.

Edmonton: Again, a good start is key for the Oilers. Last time they faced the Sharks, Edmonton fell behind 3-0 early in the game and played catch-up the entire night. They’ll need to be ready to go from the start against a pretty desperate Sharks team tonight. Do that, and Edmonton will give themselves a chance at two more points.

San Jose: The Kings and Ducks had success against Edmonton on the weekend when they were able to gain the zone and set up a cycle against the Oilers. Against a weaker defensive team, that’s going to be the key tonight for the Sharks. Get the cycle going and allow your skilled players the chance to make plays on this Edmonton backend.

Edmonton: Pontus Aberg will make his Oiler debut tonight and is expected to skate on the third line. The speedy forward is getting the chance of a lifetime here, with the opportunity to win employment with the Edmonton Oilers moving forward. I like the tools he possesses, and am interested to see how he handles this audition. I’ll be watching him closely tonight and moving forward.

San Jose: The Sharks made a big splash at yesterday’s deadline with their acquisition of Evander Kane from the Buffalo Sabres. Kane gives the Sharks a legit goal scorer to help offset the loss of Patrick Marleau this past summer, and should help boost this group’s struggling offense. He’s expected to make his debut tonight and I’ll be watching him closely in his new home.

With Maroon and Letestu gone, the Oilers will look at little different tonight. As mentioned, Aberg will make his debut in this contest while Ethan Bear is expected to be a healthy scratch after a late afternoon recall from the AHL. Zack Kassian is out after getting injured on Sunday night, while Kris Russell is a game-time decision as per Jack Michaels.

The Oilers and Sharks have met twice earlier this season, with the home team winning both games. The Oilers topped San Jose in December before the Sharks returned the favor on February 10th. The sides will finish their season series on March 14th in Edmonton.

The Oilers enter this game on a three game winning streak, just their third of the season. The Oilers season long for wins in a row is four, which they achieved in the lead up to the Christmas break. They are looking for their second such streak of the season tonight.

All good things come to an end, and tonight the Oilers three game winning streak will conclude. That said, the club will wrestle a point away on the road before falling by a final score of 4-3 to their division rivals.

The Sharks get the overtime winner from Joe Pavelski, while Kane, Hertl and Boedker find the back of the net in regulation time. Cammalleri, Slepyshev and Benning pick up the tallies for the visitors in a losing effort.