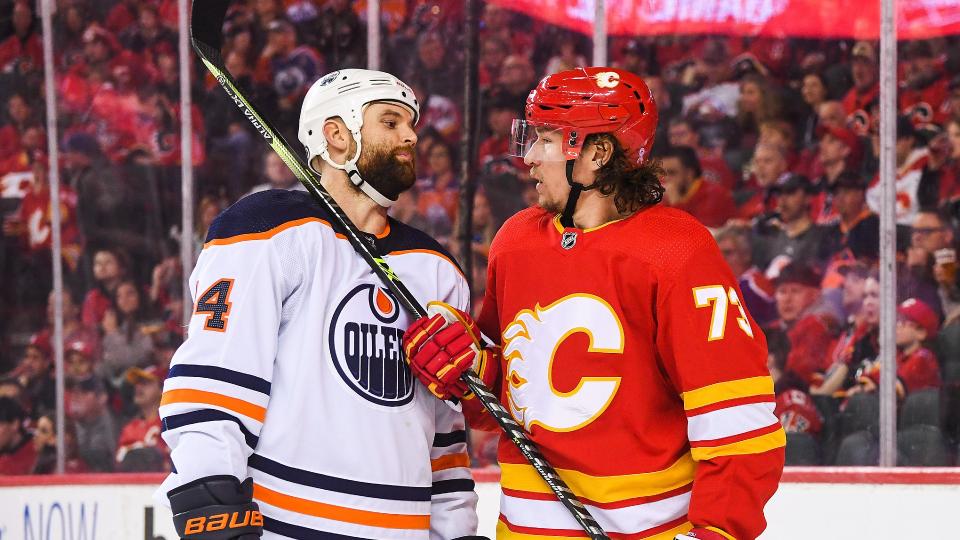 Well folks, it doesn’t get much better than this. Not only is it the 2nd round of the playoffs, but the Oilers will be taking on the Flames in what will be a most pivotal chapter in the Battle of Alberta. It’s a credit to the strength of both teams that they’ve earned this moment, the chance to rewrite their histories, their professional realities, with one of the two guaranteed to ascend to the rarefied air that is the Western Conference Final.

Although we’ve been treated to some spirited games between these teams already this season, with their most recent meeting on March 26th fresh in all of our minds, a 9-5 win by the Flames, the best and most contested is yet to come. In all, the teams split the season series 2-2-0 apiece, but the stakes are much higher now, and tensions are sure to be as well.

Both teams are coming off of Game 7 wins against opponents that posted formidable defensive efforts, but ultimately opponents they were expected to beat. No doubt each fan base is instilled with a measure of confidence in their group, yet only one will be able to hold that confidence into the Conference Final.

The starting goalies are likely to be Smith and Markstrom until further notice, although there are some capable netminders behind both starters. There are sure to be twists and turns on the road ahead, swings in momentum both ways, and it all begins tonight in game 1.

As you might’ve heard, McDavid is pretty good. In years past there’s been some defensive stats that were not positive, but that news is years out of date. Over the course of his career we’ve seen him progress leaps and bounds in these areas, this regular season being his finest yet. The playoffs have seen an even greater level of play defensively, not to mention some big hits. Regardless of who wins the Hart, playoff success can redefine careers and how they are perceived.

Draisaitl is battling a lower body injury, and his mobility is likely compromised. It’s significant enough that it will change the way the Oilers deploy him, likely the reason he rejoins McDavid. It’s unfortunate, but we’ve already seen that he can be a major factor, especially in-zone offence and the power play. Especially with McDavid and their chemistry together that he’ll be put in situations where he can succeed.

Yamamoto contributes in similar ways that Puljujarvi does, net front and board battle, but likely provides a bit more value in the transition game to mitigate Draisaitl’s limitations.

Kane-RNH-Hyman is a fantastic line, and the Oilers will be relying on the to live up to the challenge. We saw the Oilers shorten the bench last round when things got tense, and especially given the situation with Draisaitl this trio will need to produce.

Archibald has been a nice addition from the IR, and one thing that is certain is that he will bring intensity. It’s likely appropriated by his younger linemates, McLeod and Puljujarvi, who have both been strong contributors in the regular season. This is a new look, and we haven’t seen much of Puljujarvi off of McDavid’s line. However, this line has a nice blend of skills and could be an interesting part of the equation if they can deliver some symbiotic chemistry.

Ryan is a tried and true fourth line option and the Oilers can be confident that their depth can contribute some strong minutes when needed. Kassian has been at his best in the postseason, and is no doubt a central figure in the drama after the whistles.

The defence will be under pressure, and almost as much of a focus as finding a dangerous outlet pass will go towards avoiding both punishing hits and costly turnovers. It does probably lend itself to the Oilers using 7 defencemen at some point in the series, if not tonight.

The Oilers do have a plethora of options in puck movers on their blueline, and crisp decisive passes will be crucial to success. It will help for the Oilers defence to remain confident and collected under the pressure.

It goes without saying that Gaudreau-Lindholm-Tkachuk is one of the league’s top lines. All three contribute in their own ways, dominant at both ends of the ice. Gaudreau has taken heat over his career for underwhelming postseason production, but has been his electric self through one round, notably the game 7 overtime goal to clinch the series. This is by far Calgary’s best offensive unit.

Coleman brings his back-to-back championship reputation, his line will have a top checking assignment no doubt, as Backlund is a capable defensive centre. Mangiapane adds a bit of scoring touch to the line, as it mirrors some of the same role definition as the top line.

At this point it becomes clear that Sutter has a type at centre, as Jarnkrok plays a responsible style, Dube has the high battle level and some speed, while Toffoli is an established sniper who can get hot offensively.

Lucic has continued to be a contributor, even beyond intimidation, with strong defensive metrics and an impact on the forecheck.

Hanifin and Andersson are a strong top pair, both entering their prime years in their mid 20s, both can contribute at both ends, but do so in different ways with the smooth skating of Hanifin and the more rugged aggressive style of Andersson.

Kylington came into his own this season, a strong transition defender, with good skating and puck moving abilities. Tanev is a great partner and has been all season, covering some of the areas Kylington does not, but missed most of the first round, where Michael Stone filled in admirably. Somehow when the games get more important Stone seems to work his way into the lineup and delivers.

Zadorov and Gudbranson are both hulking defenders, yes, but both were also extremely high 1st round draft selections. It should not be undersold that both have a lot of talent, which can be overshadowed by their collective physicality.

Given their responsible centres the Flames will be activating their defence on the rush and on punches in the offensive zone. Oilers wingers will need to be engaged and aware, especially when the likes of Tanev, Gudbranson, Zadorov, or Andersson pinch down.

Markstrom got a Vezina nomination for his work in the regular season. He is an elite level goaltender, but is aided by his team’s commitment to defending. Much of his candidacy revolves around his heavy workload and consistency, not to mention strong record and shutout totals, but he has looked more human down the stretch.