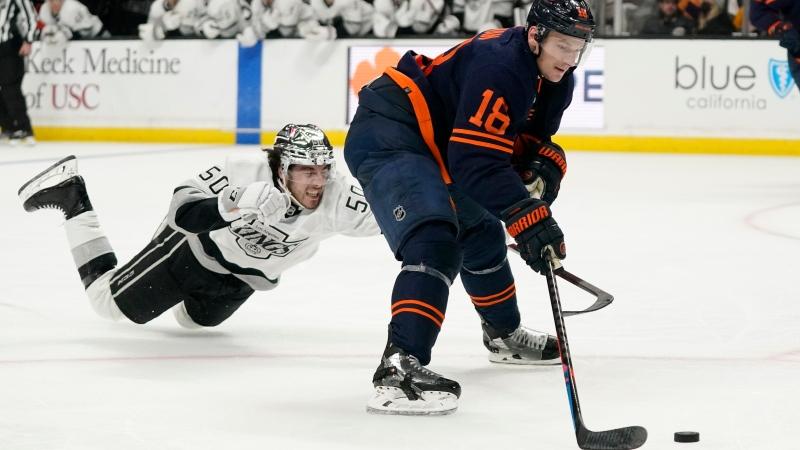 Ah, to be wrapped in the drama, to know the epic highs and lows of playoff hockey. The time for measured, process-based analysis is all but out the window as the margins for error shrink. The space between the thrill of victory and the agony of defeat is but the edge of a knife. The days following become tinted with the outcome as one waits for another chance, should there be any left.

Around the league we see many series tied at 1-1, most fans acutely aware of how far the pendulum of emotions can swing after a win or a loss. This is exactly where we find ourselves in this series, with the Oilers pulling together an effort that was much more in character, or so we hope, in game 2 to tie the series. As the series shifts to Tinsel Town, and the elimination of one of these teams draws nearer, the stakes are only rising.

The Oilers are and should be the favourites in this series, and at least had a strong bounce back after a timid and anxious game 1 performance. To get on the board with a playoff win, to snap the long playoff losing streaks of the Oilers as individuals and as a whole is surely a burden lifted. It will be on the Oilers to carry that confidence and energy on the road, where the Kings will have the advantages of the home crowd and of last change.

The matchup heavy style of Kings Coach McLellan should be even more of a factor tonight, and the frustrating defensive styles and abilities of Danault and Kopitar will be on full display. It should be an electric atmosphere as Kings fans get their chance to make noise, and we should once again see a Smith vs Quick matchup in net.

After a big win the mood surrounding the team is much more positive, with many players having strong games. Of course McDavid and Draisaitl have been strong, as have the secondary contributors up front from Kane to RNH. Ultimately it does stand out that there have been some impressive performances further down the lineup, being brought up in Coach Woodcroft’s availability by name were both Ryan McLeod and Zach Kassian.

McLeod has been a valued contributor all season, and Woodcroft noted that he feels comfortable placing McLeod anywhere in this forward lineup, 1st to 4th line, centre or either wing, penalty kill or power play. The young coward and coach have a years long relationship thanks to their time in AHL Bakersfield.

Kassian has been a touchy subject thanks to his less than ideal cap hit and contract length, but even the staunchest of cynics would have to concede that these past 2 playoff games have been Kassian’s best of the season. His physicality is no doubt more pronounced than usual, but over time the impact will be more profound as well. Woodcroft described physicality as “investing in the series”, as even outside the big hits we’ve seen Kassian deliver, being intense and physical in each and every battle takes a toll on the opponent.

On the back end the top performers, at least against their respective regular season play, has been both Keith and Bouchard. Keith shares some similarities with Kassian in that their contract circumstances make them more likely to receive criticism from fans, but it is incredibly positive that Keith is playing his best at this most critical point of the season. The “intangibles” that defined a lot of the potential upside (and that seemed contradictory based off of several off-ice issues) have come out into the spotlight. Perhaps the two best transition passers on the Oilers blueline have elevated their play against the trap-happy Kings.

His partner, Bouchard, also received compliments from Woodcroft in his pregame availability. It’s true that Tippett seemed more content to give Bouchard a larger defensive role than the current regime, but Woodcroft noted how Bouchard has been making big strides towards increasing his role in the new system. It’s unlikely that Bouchard will ever be as physically engaged and as effective defensively as say Nurse, but the fact that he is willingly growing and focusing on the defence and physicality Assistant Coach Manson is providing is a fantastic sign for the big-picture upside.

The experience and reaction to Mike Smith and his first two starts in this series are a microcosm of his time in Edmonton. Based strictly off of age and reputation, anytime something goes wrong or the veteran hits a rough patch the feeling is that his time as a viable number 1 option was over years ago, lost somewhere in the Arizona desert. The Oilers are criticized for even considering him an option. His brazen attitude and strange style become evidence of his unworthiness. Somehow he delivers, managing to put together as many strong performances, or at least enough to have generally held up and given the Oilers a chance to win as he has for the 3 seasons he’s spent with the team.

Father Time is undefeated, and the doomsayers who routinely predict that player x, y, or z will fall off will be right eventually. It seems to me that many are reluctant to give Smith credit for proving most of us wrong (yes, myself included, at times) for most of the past 3 seasons.

Game 2 showed how much the Kings have trouble generating offence when their opponents do a good job of not turning pucks over in transition, especially when Victor Arvidsson is out of the lineup. He’s been a game time decision for both games so far and does not look to be in line for a return tonight.

Deep within their lineup does lie the talent to create goals though, with Byfield and Kaliyev. It is still a bit much to expect the pair of youngsters to consistently lead the Kings attack as they seem poised to one day, but within a single game, especially with the last change that home ice affords, the possibility that they are able to make magic certainly exists.

Mikey Anderson might be the Kings best defensive defenceman, and even coming off of injury in a season where he missed a lot of time we’ve seen some strong play from him.

Although the goals he allowed were not all on him, Quick was much stronger in game 1 than game 2. Like Oilers starter Smith, there are sure to be some ups and downs, but Quick can become a dominant force in a series. If his aggressive play starts to gain the upper hand he can get into the minds of opposing shooters more than most other goalies.