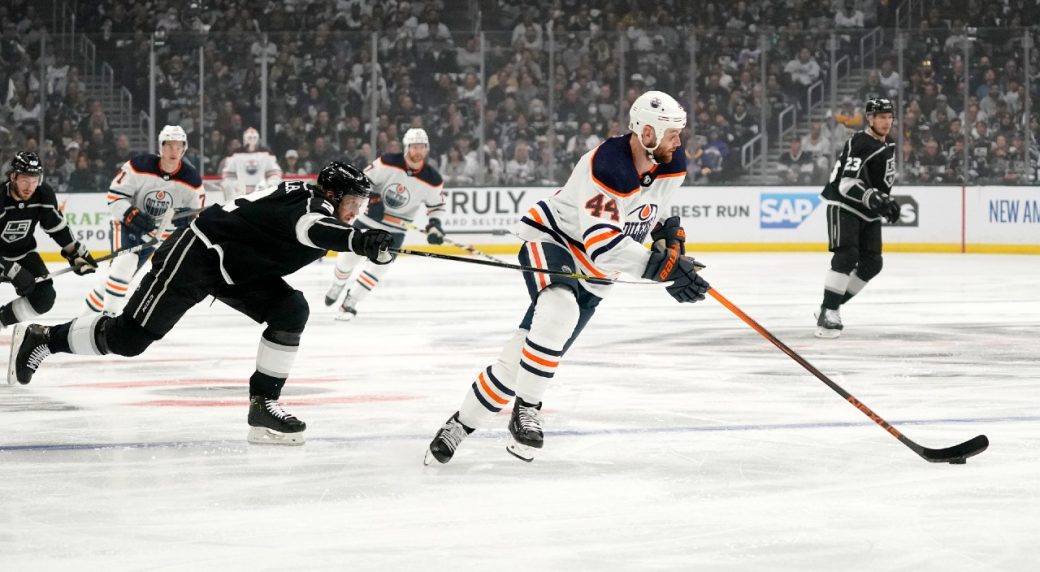 Well here we are, on the precipice of what might be a long off season, as for the first time in 2022 the Oilers find themselves one loss away from elimination.

Unfortunately it seems as though the Oilers have blinked first in this game of chicken, slowly unravelling, regressing even, into a more flawed version of themselves. In some ways all of the progress we thought we saw from the team under coach Woodcroft seems to have evaporated, including certain lineup adjustments that have been made.

To make matters worse, top defender Darnell Nurse is suspended for tonight’s game after the headbutting incident. A lot has changed since the Oilers took a 2-1 series lead with a dominant performance in game 3, and very little has gone well since.

If there is one solace it is that momentum can just as swiftly swing into the Oilers favour. It does feel as though it has all fallen apart rather quickly, but it’s true that the effort in 3 of the 5 games has been under immediate and uniform criticism. It has not been since the frozen days of winter, the end of the Tippett era, that we’ve seen the Oilers outplayed so thoroughly and consistently over such a large stretch.

I don’t think any of us are ready for the end, yet it will be in the building tonight, at least. There are sure to be some adjustments of inspiration and desperation alike as tonight’s game clock reaches zero.

Is it an ominous sign that we might be closing the season as we opened it, as for the first time in months McDavid and Draisaitl will start on the same line. For much of the offseason a question of particular interest was how, if, the team could manage to function without the pair of superstars, or how they might be able to hold up on separate lines. The idea of depth was a huge issue in the early stages of the season as well. McDavid in particular has been his exceptional self throughout the series, while Draisaitl has had a tougher time at 5 on 5.

I completely understand the impulse, and in a sense loading up the top 6 does mirror the Kings deployment of forwards, but I am skeptical. Naturally, my opinion doesn’t matter much, but on an existential level is the answer to the Oilers issues really so rooted in their past selves? Was splitting up the consistently effective Kane-McDavid-Puljujarvi line really necessary? Surely there must be another way to get a Draisaitl line going.

Even so, on an overarching level it’s almost impossible to say that either McDavid or Draisaitl have failed to live up to their ends of the bargain over the course of this series.

Quite honestly, this much should be expected from the Kings. It’s no secret that Kopitar and Danault are 2 of the league’s best defensive centres, and that having one of McDavid or Draisaitl lines be effective should be enough to win, especially considering the depth the Oilers have up front.

A change I agree with to a greater extent is reuniting Hyman and Nugent-Hopkins, as the 2 have been quite effective when on a line together, perhaps even producing some of the best hockey we’ve seen from either during those brief moments.

I know I’m not alone in this thought, but not keeping Puljujarvi on McDavid’s wing is simply the wrong decision, as their partnership has been symbiotic. None have been better on McDavid’s left, and Puljujarvi hasn’t been as good anywhere else. That being said, McLeod can hold his own as a 3C, and having those 2 together is something to work with.

The usage of Josh Archibald is surprising to me. The intense winger has never been mistaken for anything other than a bottom 6 forward, and missed most of this season. With all due respect Foegele has a similar profile, if not slightly more quality outright, and has consistently performed for the team, although I suppose this deployment does highlight the desire to keep Foegele and Ryan together.

The blueline has some reshuffling as well, as expected given the Nurse suspension. When Nurse missed time down the home stretch of the regular season Kulak essentially filled his spot, which makes sense given his size and skating make him the closest thing the Oilers have to Nurse on the left side, at least for now.

Ceci has punched above his weight all season, particularly under Woodcroft logging top pair minutes, but it’s fair to wonder if both he and Nurse, or Kulak for tonight’s purposes, would be better served being paired with more of a puck moving option.

Keith and Bouchard have been together a while, and it’s had its share of positive moments, including early in the series where the pair might’ve been the Oilers best. Keith, however, had extremely underwhelming efforts in the last 2 games of the series, perhaps overextending his minutes has caused diminishing returns. With Nurse out it’s likely that Bouchard is the Oilers top defender, and there might have to be some mixing and matching as I believe the Oilers will need to use him more than Keith can keep up with.

Russell and Barrie are stylistic opposites, but similar in that they have very specific uses, specialists in a sense. Unfortunately the duo has not always worked well together given they lack the physicality to break up cycles as much as one would hope.

Sure, Smith isn’t the playoff MVP candidate he might have been for his Coyotes teams a decade ago, and at the very least his game 1 blunder was costly, but he’s still performed well enough to give the Oilers a chance, at least in my opinion. Perhaps the Oilers, given their construction, need more than that to win, but this would be a question of design rather than individual performance, as in I don’t think it’s at all reasonable to expect or require much more from Smith than he has delivered. Even the game 1 giveaway came in a game that the Oilers were outplayed at even strength, which is really the biggest issue in the series so far.

Much fewer changes are expected from the Kings, as they’ve won the past 2 games with what is essentially the same lineup. The only real surprise has been Grundstrom fitting into the top 6 so nicely. He’s always shown feistiness and the capability for strong battles at the net front and along the boards, but we’ve never seen him in such a prominent role. No doubt the play of his linemates Danault and Moore is a sturdy platform to operate from.

The Kings have had the more impressive blueline as the likes of Edler, Anderson, Stetcher, and Durzi have had great series. Stylistically there is more emphasis on defensive abilities, no doubt aided by the defensive emphasis of the Kings lineup in general.