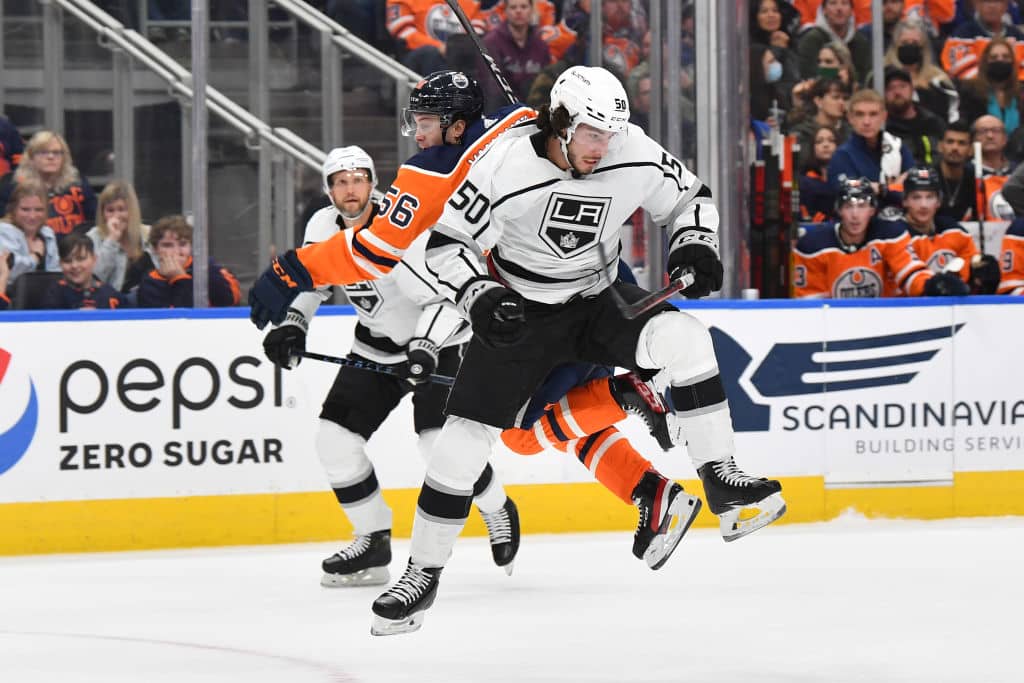 The post season is finally upon us. There were some twists and turns, some doubtful moments that the Oilers could finish the regular season so under control, but in the end they found another level to their game. The more the Woodcroft era has progressed the more the team’s performance has followed suit, strong defensive play, controlling the majority shot attempts and scoring chances, and most importantly stacking enough wins to earn home ice advantage in the first round against the Los Angeles Kings.

Perhaps most emblematic of this recent ascension is the NHL’s 2nd star of the Month of April, Mike Smith, who authored what might be the best month of his career to close out the regular season. After missing much of the early part of the season with injury there was some doubt if Smith should even be given the opportunity to reclaim the starters role from Koskinen, who held the fort well in Smith’s absence. Of late there is little doubt that the veteran Smith is still the goalie of the here and now for the Oilers.

It is without much pleasure that I have to bring up the fact that the Oilers haven’t won a fully real, bonafide, not play-in but playoff game since the run of 2017. It has been a long frustrating wait, but at this point there is a well earned sense of optimism that the Oilers have what it takes to put all of that baggage behind them.

In their way, across the ice tonight is their division rival Los Angeles Kings. The Kings are perhaps a bit of a surprise to be here, based off preseason projections, but maintained a high level of play even without their top defenceman Drew Doughty, who will not play in this series due to injury.

The Kings are certainly an interesting team with some unique talents throughout the lineup, perhaps offering a more defensive minded profile to contrast the Oilers offensive disposition. Historically, the lawlessness of the playoffs benefits defence, evidenced by the past 2 runners up Dallas and Montreal, who rode a mistake-free defensive effort into outlasting multiple opponents with more skill or stronger records. Whatever on-paper advantages the Oilers may have, none of that will matter much once the puck is dropped tonight, and the Kings should not be underestimated or taken lightly.

In net the Kings are likely to go with Jonathan Quick. The multi-time Cup champion has stolen several playoff series in his time, and his aggressive style has suffocated opposing offences before. Much like Smith, their aggressive styles and uneven results have had critics question their abilities, but regardless of how valid those evaluations are one has to concede that both Smith and Quick can be as dominant as anyone in the short stretch of a best-of-7 series.

This is essentially the tried and true lineup for the Oilers, as the extra defender helps manage everyone’s role on the blueline, and the open spot up front allows star forwards to be double shifted with ease.

Kane has continued to find his stride, not something every player who misses the first half of the season is able to pull off. He’s been at his best with the strong play of McDavid and Puljujarvi, who have continued to produce their best results when deployed together. McDavid will likely have to play through an increased number of harassments, likely from shutdown centre Danault, and the refs are likely to let even more go uncalled against the star than in the regular season. Having a pair of big, physical, wingers might help open up a bit more ice for McDavid than usual, and the captain will have to keep his emotions in check so that when the Kings inevitably slip up he’ll be ready to capitalize.

Like so many around the league Hyman had a career year, and much of it came here on Draisaitl’s wing. Both Hyman and Yamamoto are battlers, high energy workers, who can create some havoc around the net. Like McDavid, Draisaitl is likely to see some tight checking, and any drop off in defensive effort against this line will be costly for the Kings, as we’ve seen Draisaitl dominate a series before.

With the top 2 lines drawing so much attention the RNH line could play a huge factor in the series. Foegele and Ryan have shown themselves to be effective two-way players in this role, not to mention their strong synergy together, and are certainly elevated offensively by RNH’s playmaking skills.

McLeod can contribute up and down this lineup at both centre and wing, essentially providing Woodcroft with options everywhere thanks to his versatility and high level of play. Kassian has had a rough season, as evidenced by his slide down the lineup, but his mean streak is something that could be at its most useful here in the playoffs.

Nurse returns from his time out of the lineup, and although he is unquestionably the Oilers top defender they at least got a chance to show they won’t completely implode without him. It’s unlikely he’s at %100 but Nurse will be a major contributor to the Oilers efforts regardless.

Ceci has been beyond expectations all season and deadline acquisition Kulak is following suit. Both defenders have the size, skating, and overall physicality to be strong shutdown defenders while still possessing enough puck skills to contribute offensively.

Bouchard has likely passed Barrie on the depth chart, but both provide a lot of skill from the back end. As long as some gaffes can be limited, their puck moving ability will be crucial to getting through the tightest checking the Kings scan muster.

Keith has bounced back from his play in Chicago the past couple years, but his playoff experience and generally cantankerous nature should see him at his best from here on out. If he is able to elevate his play from the level he kept this regular season the Oilers will be so much better for it.

Sure, Smith is (relatively) old and had injury problems, and quite frankly has always had his share of doubters as far back as his time with Tampa Bay more than a decade ago. That said, even in last year’s playoff exit Smith more than held up his end of the bargain. Obviously a poor goaltending performance could sink the best of teams, but with Koskinen and even Skinner behind, the Oilers look to have strong enough goaltending to let their overall play dictate how far they go in the playoffs.

The Kings will lean heavily on their top 2 forward lines, led by the strong 2-way play of centres Kopitar and Danault. Although the Oilers have last change, as the home team, it’s likely we see the Kings try to match these 2 against McDavid and Draisaitl. Kopitar, the bigger body, is likely to match Draisaitl, while Danault, one of the league’s top defensive centres in his own right, will likely be up against McDavid when possible.

Kopitar has been with Kempe as the winger reached new offensive highs this season, scoring 35 goals. Athanasiou, a former Oiler (briefly), adds a needed speed element to the line. Athanasiou missed a lot of time with various injuries this season but is an important offensive spark plug to the Kings defensive style.

Danault is recreating his years of success dominating play in Montreal with a pair of wingers that bear some resemblance to his old Habs linemates. Moore is a high energy battler, and has come into his own beside Danault. He is particularly good at winning board play to get the puck off the wall and into scoring position in the offensive zone. At least for me there are some Brendan Gallagher or Zach Hyman type qualities to his game. Arvidsson is feisty in his own right but certainly has the most shooting talent on this line. This group has had an outstanding season.

Brown and Iafallo have both spent some time in the Athanasiou spot, both this season and over the years, and provide nice support for Lizotte on the 3rd line. They’ve had good defensive results all season, contributing despite modest offensive ability as a unit.

Byfield and Kaliyev are sublime offensive talents who are still growing into their games. They have yet to fully assert themselves into important roles on this roster, which will come soon enough, but both have enough talent to make the Oilers pay for any time and space the pair are afforded. Either one finding their stride in this series would be terrible news for the Oilers chances.

Despite missing Doughty the Kings are as healthy as they have been on the back end this season. Anderson is thought of as Doughty’s partner, and Durzi did step into Doughty’s role, especially offensively.

Edler has been fantastic as always, a steady veteran presence with some snarl to his game, while Roy has quietly been a top 4 contributor on this blueline over the past couple seasons.

Spence is every bit as good as Durzi already, and the 2 youngsters represent the Kings best offensive options on the back end. Maatta is an ideal partner for defensive balance. It’s likely that these defence pairs could be placed in a different order, and it’s likely all 3 pairs see similar icetime totals over the course of the game.

Quick does have some similarities to Smith as I mentioned above. With an aggressive and unorthodox style we’ve seen Quick reach the highest of highs, winning Cups and authoring 0-3 series comebacks, creating an aura of invincibility reminiscent of Dominik Hasek. We’ve also seen his fair share of disastrous performances including the 2016 World Cup. At the very least the goaltending battle will be exciting and aesthetically chaotic, and it’s not out of the question that the series becomes something of a goaltending duel. It’s likely that the Kings will need Quick to be near his best to steal the series, and a low scoring affair certainly plays to their hand.