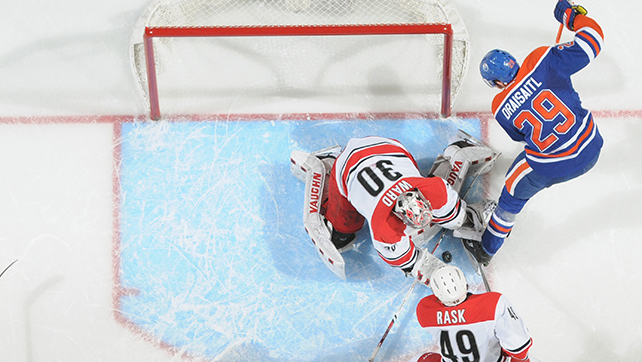 With their home preseason slate now completed, the Edmonton Oilers will hit the homestretch of the exhibition portion of the year tonight with a road game against the Carolina Hurricanes. The only thing is, the Oil won’t be heading to the States to battle the Canes, they’ll be heading to Saskatoon for a neutral site contest.

Once again, the Oilers and Canes are expected to dress veteran NHL lineups as we inch closer to the real deal next Wednesday night. Jujhar Khaira, who appeared to be banged up on Monday night, is out of the lineup while Zack Kassian returns to the lineup. Interestingly enough, both Kailer Yamamoto AND Jesse Puljujarvi will dress tonight as they battle for a roster spot.

The Oil got some bad injury news earlier today, as Ryan Stanton has a broken foot and Anton Slepyshev is expected to start the season on the IR. This news gives the club a little more clarity on the seventh defender battle and it may just have opened the door for Kailer Yamamoto to make this roster.

The Oilers are doing some interesting things with the lineup tonight, including placing Yamamoto on the top line with Patrick Maroon and Connor McDavid. Jesse Puljujarvi will also skate in the top-six tonight, while Yohann Auvitu will get a spin on the top pairing in an interesting turn of events.

The only expected defender from the opening night lineup who is missing tonight is Oscar Klefbom, who Auvitu is replacing.

It looks like Laurent Brossoit will get the start, but we have heard nothing about that or a division of time between the goalies tonight. If I were a betting man, I’d suspect LB gets the full 60 minutes here while Cam Talbot takes a spin on Saturday in Vancouver.

Interesting that Chris Kelly lines up at center while Malone goes on the wing. Malone has been better to me this preseason and I’d argue he has earned a roster spot over Kelly. This could be the final audition for one or both of these guys, while I don’t think Iiro Pakarinen is safe just yet.

After going the full game on Monday, Scott Darling is expected to backup Cam Ward tonight. Ward struggled mightily last season and is a shell of the goalie that stole the Cup in 2006 from Edmonton. Up front, Jordan Staal is the biggest omission from Monday night, while former U of A product Derek Ryan gets a big push.

Teuvo Teravainen, who scored a pair on Monday night, is also out of the lineup as Phil Di Giuseppe draws in. Defensively, we won’t see Justin Faulk but we get a good look at Hayden Fleury, another former high pick by the Canes.

Dahlbeck, Carrick and Chelios will also all draw in after not playing on Monday in Edmonton.

The big one is Kailer Yamamoto once again. He has dominated to this point in training camp and in my mind has earned a nine game look in the regular season. Tonight he gets a look with McDavid and Maroon, and if he can produce and look like he belongs it will only strengthen his case. It’s a big night for the rookie.

Jesse Puljujarvi is a close second in the story department as he tries to fight for a roster spot. JP hasn’t looked NHL ready to this point, and I’d argue that he should start the season in the AHL. Skating on the second line is a big opportunity for JP…it could also be his last opportunity of this training camp.

This is also a prime opportunity for Yohann Auvitu. A good night for him could solidify a roster spot over Mark Fayne, who has struggled so far in camp. Auvitu has impressed me and will be in a featured role tonight. It’s a big night for him and I’ll be watching him closely.

The Malone/Kelly battle will also be interesting to watch. I think Malone has been the better of the two but I think Kelly has a legit shot to make this roster due to the penalty kill struggles. Other things to watch include Ryan Strome at center, Drake Caggiula shifting back to left wing, and the Russell-Benning pairing.