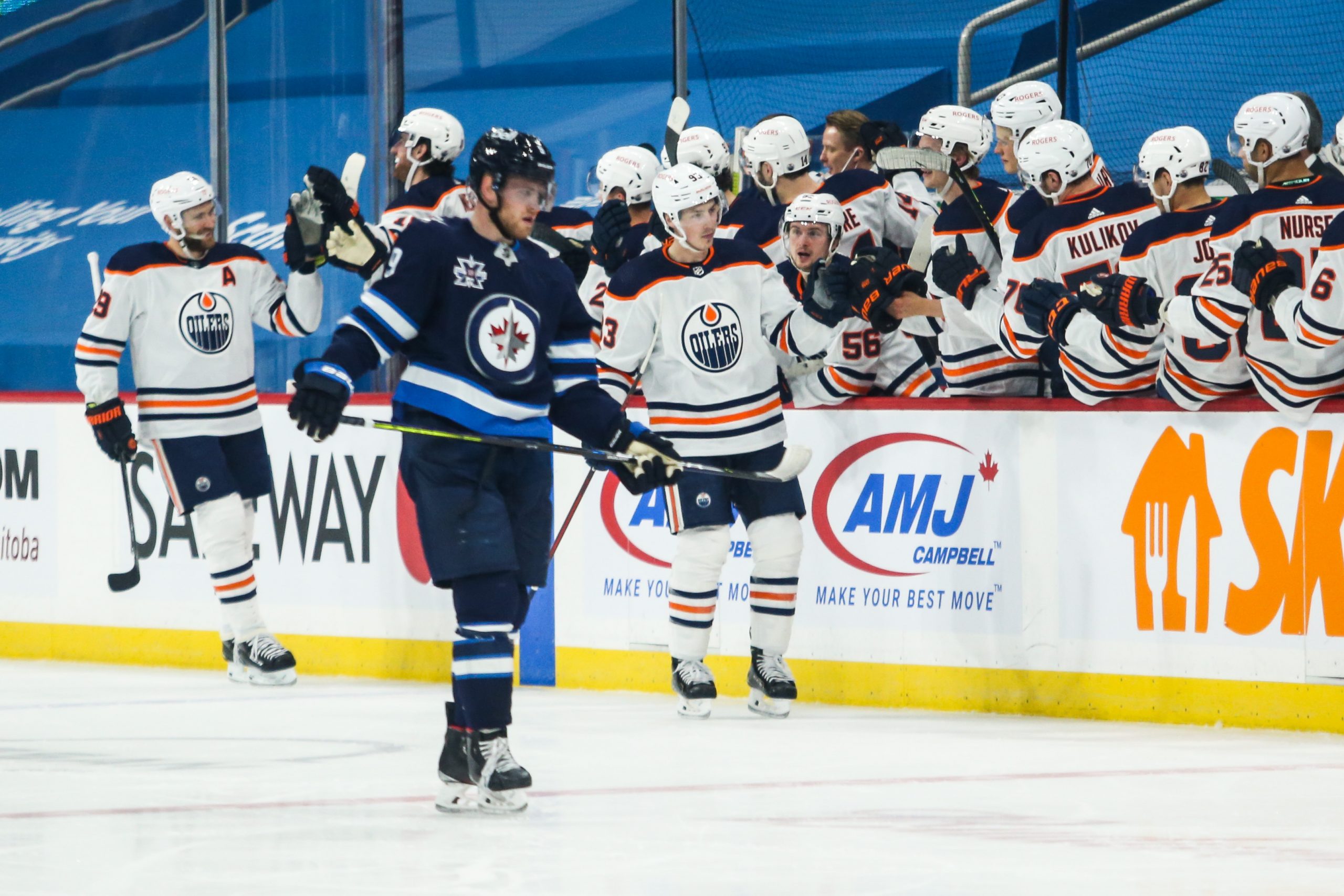 The Edmonton Oilers finally have an opponent for their upcoming first round series in the 2021 Stanley Cup Playoffs. Already locked in as the second seed in the North, the Oilers found out on Tuesday night that they will take on the Winnipeg Jets in the first round. The series will start next week, with Thursday the likely date for Game 1 in Edmonton.

The Jets have crawled to the finish line of this season, but did score a dominating 5-0 victory over the Vancouver Canucks on Tuesday night to clinch the third seed in the North Division. Currently, the Jets sit three points up on the Montreal Canadiens, with both teams having just one game remaining in their season.

There is a lot of history between Edmonton and Winnipeg in the playoffs. An old rivalry will be renewed over the next two weeks, a rivalry that extends all the way back to the WHA days.

In the NHL, the Oilers and the Jets have met six prior times in the Stanley Cup Playoffs. To say the series have been lopsided would be a complement to the Jets. The Oilers have won all six series, and are 22-4 all-time against the Jets in the playoffs.

An interesting tidbit for Oilers fans? All five of Edmonton’s Stanley Cup Championships have included a series victory against the Jets along the way. Not a bad omen if you are hoping for a return to glory in Northern Alberta this spring and summer.

The sides met in the playoffs for the first time in 1983, where the Oilers swept the Jets 3-0 (best-of-five) in the Division Semifinals. The Oilers would advance to the Stanley Cup Final that spring, but fell in a sweep at the hands of the New York Islanders.

After playing three straight seasons in the playoffs, the Oilers and Jets didn’t meet in 1986, but played each other again in both 1987 and 1988. In 1987, Edmonton swept the Jets 4-0 in the Division Finals, advancing to face the Detroit Red Wings in the Conference Final before defeating the Flyers again in the Stanley Cup.

In 1988, the Oilers knocked off the Jets in five games in a best-of-seven Division Semifinal series. That single game victory was the first-ever Jets playoff win against the Oilers. Edmonton would defeat the Boston Bruins in the Stanley Cup Final that spring, just months before trading Wayne Gretzky.

The final playoff meeting between the sides came in 1990 in the Division Semifinal. The Jets jumped out to a 3-1 series lead, but Edmonton stormed back to win the final three games and shock the Jets in seven. Once again, the Oilers went on to win the Stanley Cup, defeating Boston for the second time in three years.

The teams did not meet in 1991 and 1992 when Edmonton advanced to the Conference Final in both seasons. The Jets failed to qualify for the playoffs in 1991, and then lost to the Vancouver Canucks in the Division Semifinal in 1992 while the Oilers defeated the Los Angeles Kings.

After 1992, the Oilers would not return to the Stanley Cup Playoffs until 1997. The Jets, meanwhile, left Winnipeg following the 1995-96 season for Arizona.

Although the NHL returned to Winnipeg, via Atlanta, in time for the 2011-12 season, the teams have not made the Stanley Cup Playoffs in the same campaign until this year.

Tale of The Tape:

Like the playoff series of years gone by, the 2020-21 season series was all Oilers. The teams met nine times, with all nine games ending in regulation. The Oilers posted a 7-2-0 record in those games, and torched the Jets with their top players.

The Oilers outscored Winnipeg 34-22 in the season series, while Connor McDavid led the way with 22 points (7 g, 15 a) in nine games. McDavid never scored less than two points in a game against the Jets, while Winnipeg’s leading scorer in the series only managed eight points. That was forward Nikolaj Ehlers (3 g, 5 a), who may not be ready for the series.

In addition to McDavid’s prowess against the Jets, Leon Draisaitl scored 12 points (7 g, 5 a) in the nine games, while Darnell Nurse chipped in ten points (2 g, 8 a) of his own.

In net, Mike Smith might not be the bigger name, but he did get the better of Connor Hellebuyck. Smith went 4-0-0 in five starts against the Jets with a .936 save percentage, a 2.06 GAA and a shutout.

Hellebuyck, meanwhile, managed just a 2-5-0 record against the Oilers with an .877 save percentage and a 3.96 GAA.