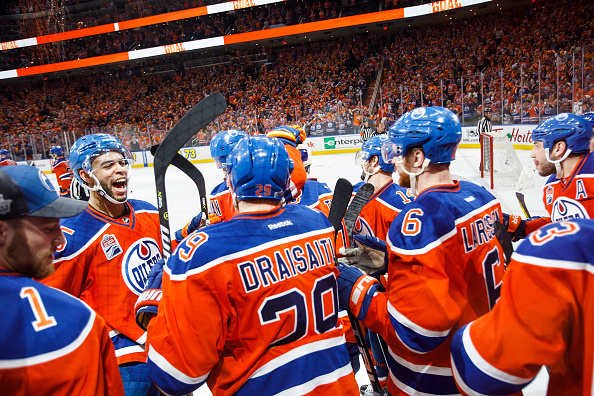 Tonight, the Oilers will play preseason game three against the Winnipeg Jets in Manitoba. We’ll have full pregame coverage here at the Rig later in the day, but I’m interested in seeing how the lineup looks for this game. The team split into two groups yesterday and there was a clear “NHL” and “AHL” feel to the groups on paper.

In the NHL group, there are a few notable battles starting to take place both up front and on the backend. Defensively, the top six looks to be set as Oscar Klefbom, Adam Larsson, Kris Russell, Matt Benning, Darnell Nurse and Eric Gryba return from last year. The seventh defender spot, however, looks to be a battle between two veteran players in Yohann Auvitu and Mark Fayne.

Both have been skating with the NHL group and that comes as a surprise to me. I picked Auvitu to make the roster before camp began, but I completely counted Fayne out because his style doesn’t fit that of Todd McLellan’s system. It looks like he’s getting a fair shake however, and that he’s ahead of newcomers Ryan Stanton, Keegan Lowe and returnee Dillon Simpson.

Up front, there are no surprises until the bottom of the depth chart. Patrick Maroon, Connor McDavid, Ryan Strome, Milan Lucic, Leon Draisaitl, Drake Caggiula, Jussi Jokinen, Ryan Nugent-Hopkins, Jesse Puljujarvi, Jujhar Khaira, Mark Letestu, and Zack Kassian fill out the top 12 spots as expected. After them? Three names all fighting to make the roster with two spots likely up for grabs.

Iiro Pakarinen, who seems to have the trust of McLellan, is one of those players and is skating on the extra fifth line. His center? Chris Kelly, who is in camp on a PTO and could serve as the club’s fifth center. It’s worth noting that Kelly is with the NHL group while his direct competition, Brad Malone, skates with the AHL group.

Lastly, Kailer Yamamoto skates with the NHL group. After a strong summer, decent rookie camp and great preseason debut, has Yamamoto put himself on the radar for employment on opening night? I think it would be wise for the Oilers to send him back to junior for at least another season, but the young forward has forced his way into the conversation.

Where would he fit in the lineup? Well, it could be in a spot seemingly reserved for another high draft pick on the wing.

Puljujarvi Must Step Up:

It’s only the first preseason game and I refuse to base evaluations on just one night, but Jesse Puljujarvi needs to step up here and fast. He didn’t stand out in the preseason opener and even though his skating looks better compared to last season, he looked like the same player from a year ago.

Now, of course, it is very early in the preseason and things will change in the next two weeks before opening night, but I was hoping to see a little more urgency right out of the gate from Puljujarvi. No doubt he will get every chance to succeed, but he really needs to show something in this preseason. If he doesn’t, I hope the Oilers don’t hesitate to send him down to Bakersfield for a stretch to get his confidence back and his play to a higher level.

A rumor popped up on Twitter last night suggesting that the Oilers are talking to Vegas about defender Colin Miller, who Vegas selected from Boston during the expansion draft process. I like Miller’s game and think he could be a nice fit with the Oilers moving forward.

Miller is a right-shot defender who plays an offensive game, filling an area of need in Edmonton. He’s got a strong point shot and could help out on the powerplay, another area of need with Andrej Sekera on the mend. I’d also suggest that Miller is a much better bet in the everyday lineup than Eric Gryba, who is slotted as the sixth defender, is.

Here is Miller’s scouting report via The Hockey News:

Miller posted 6-7-13 last season for the Bruins in 61 games and averaged only 15:48 TOI per game. Having watched a number of Bruin games, I will say that Claude Julien favored players like Adam McQuaid and Kevan Miller, which cut into Miller’s playing time in a big way.

As per Adrian Dater, the Oilers were in Denver last night scouting the preseason game between the Golden Knights and Avalanche. Miller dressed and was on Vegas’ top pairing in the preseason contest.