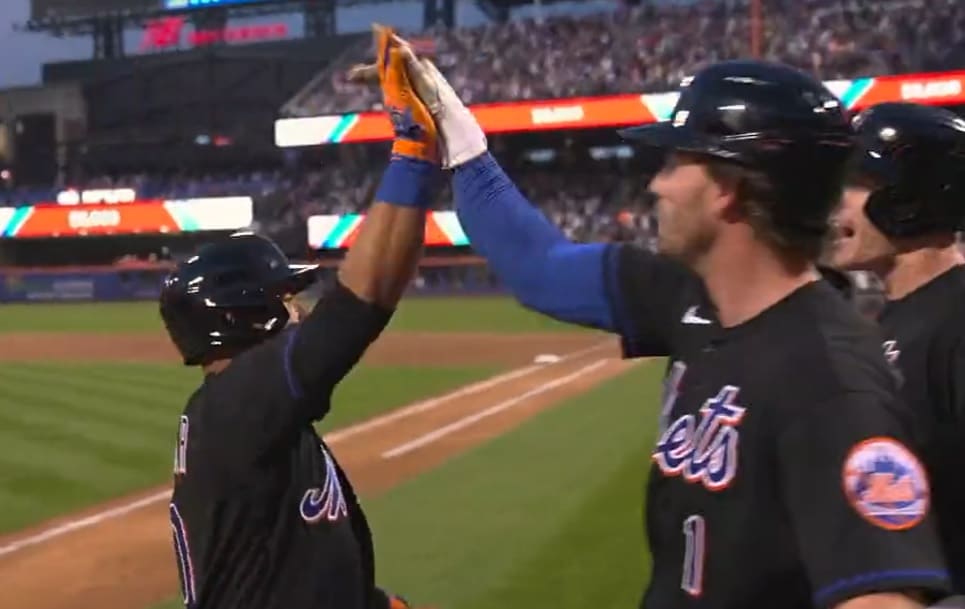 It’s a tale as old as time itself: Starting pitcher goes on the non-injury IL, and substitute pitcher not in his rotation spot steps in with minutes to spare and does an admirable job.

No, not that substitute pitcher. (Although that’s really weird that Bartolo just happened to be in the ballpark when Chris Bassitt was ruled a no-go. And wearing a Friday black jersey, too. Almost too coincidental if you ask me.)

No, it was just David Peterson stepping into Bassitt’s spot in the rotation and giving a good performance in Chris’ stead, going six innings and giving up three runs. You know, a quality start. But he gave up five hits, didn’t walk anybody, and struck out 10 Rangers on the night. So to just pass it off as a good ol’ quality start, even if it is against the league average Texas Rangers, is doing Peterson a disservice. He was very good.

Meanwhile, the Mets got to Glenn Otto the second time through the order. After a single by Francisco Lindor, a pop out by Pete Alonso and a walk to Jeff McNeil, Mark Canha grounded one over the third base bag to tie the game 1-1 in the 4th. Then with two outs, Eduardo Escobar got robbed on a 3-1 pitch by Jim Reynolds. Escobar’s reaction to that umpire misstep was a little different than Carlos Carrasco’s reaction to the umpire missing Jose Altuve’s swing at strike three on Tuesday.

With a 3-1 count, the umpire calls a bad pitch strike 2. Instead of losing his mind, Escobar blasts the 3-2 pitch for a 3-run HR. Mark it down, this is the turning point for his season. @Metstradamus

The bullpen also deserves note for shutting down the Rangers for three innings with the wolf at the door. The order was interesting, as you had Seth Lugo in the 7th and Adam Ottavino in the 8th before Edwin Diaz got the ninth. Only hit given up was by Ottavino, but the leadoff single in the 8th was quickly erased on a double play. It was interesting to see Ottavino get the 8th as he was tasked with getting the top of the order (and arguably the most dangerous part of the order): Marcus Semien (who hit a dinger to start the scoring but hit into the double play in the 8th), and Corey Seager. But hey, it worked. What Buck is doing is working. Whether it’s bringing in Diaz for big spots in the 8th or Ottavino against the big money twins, all the decisions seem to be falling in Buck’s favor.

As for the Mets, well it was close but they took care of business against a team who they are supposed to take care of. It gets tougher with Peterson being moved up, but Trevor Williams will be the guy on Saturday and he’s proven to be serviceable in the floating starter spot. And if he falters? Well, I’m sure Bartolo will be hanging around just in case.

1. Jim Reynolds
2. Kole Calhoun
3. Mitch Garver
4. Adolis Garcia
5. Chris Young (For comparing Adolis Garcia to Bo Jackson before the game, and for saying that the wave was his favorite thing about baseball. Like, dude.)

Mets who I forgot were also Texas Rangers

Rangers who I wish I could forget were Mets