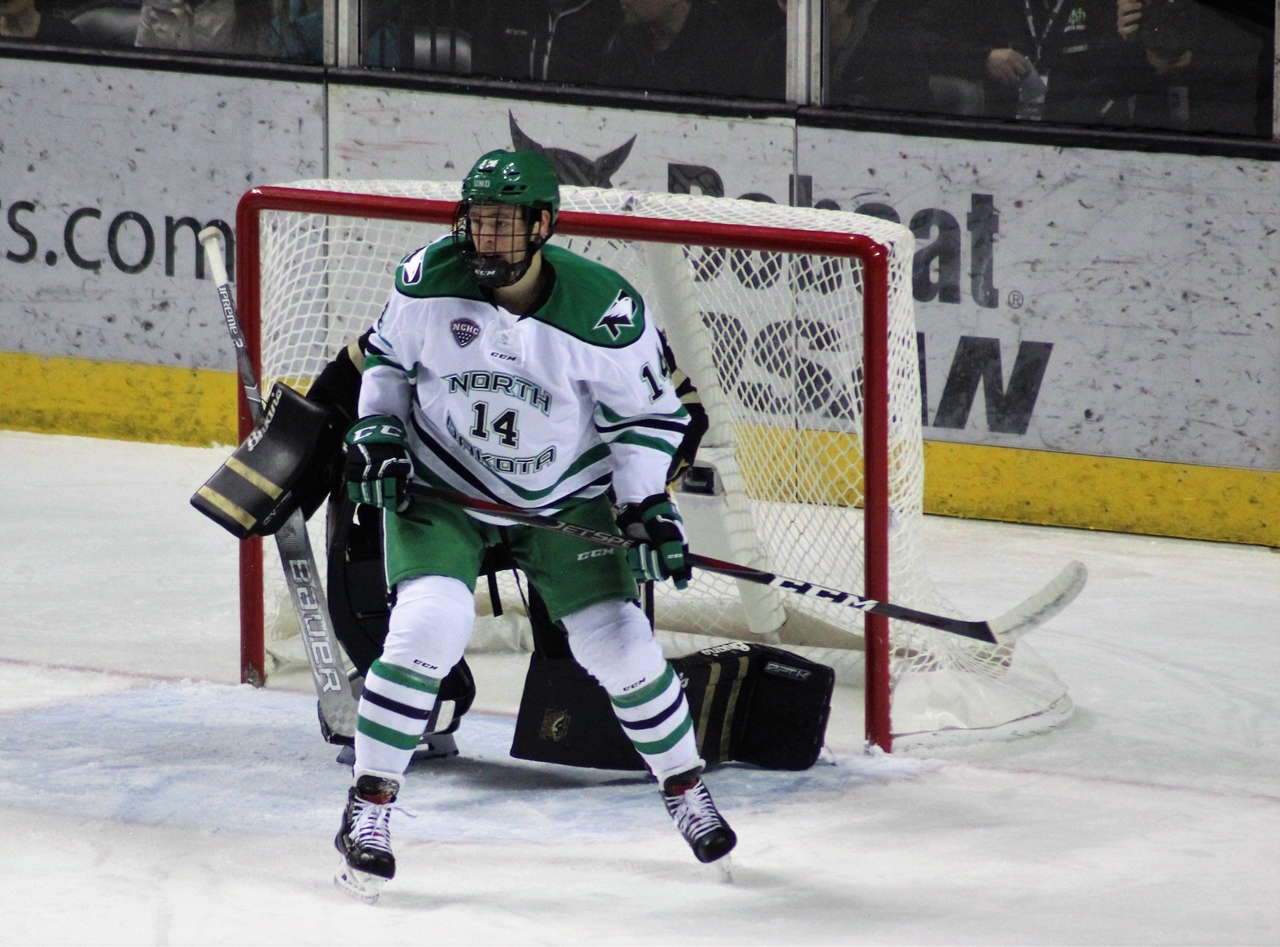 The University of North Dakota men’s hockey team played for the first time in 270 days and they continued with their winning ways.

Ironically, the Fighting Hawks returned to the arena where they played their final game of the 2019-20 season.  Like the previous game, the Hawks hung another shutout on the opposition. This time the Miami University RedHawks were the victim. The Hawks D-core stifled Miami holding the Red Hawks to only 19 shots on the net. UND outshot Miami, 18-4 during the first period.

In the last two games UND has played in Omaha, the Hawks have outscored their opponents 7-0. According to the UND SID: the Hawks extended their streak of not allowing a goal to 125:02, dating back to a Mar. 6, 2020 game at Omaha.

The game was close and Miami fought till the end of the game. The two teams played to a 0-0 tie through 33 minutes of play.  Finally, senior defenseman Matt Kiersted broke through and scored the game-winning goal with a laser from the top of the slot.

The 3rd time is the charm!

At the 1:10 mark of the third period, UND padded their lead with a beautiful goal by freshman forward Riese Gaber, a wrist shot under the right bar, glove-handed side. His goal reminded me of the ones Brock Boeser used to score. A welcome addition to the UND hockey team.

The goal scorer Gaber played on a line with Gavin Hain and Shane Pinto. The trio had instant chemistry. Pinto, had two primary assists in the game, and assisted on Gaber’s goal. The three had never played together, but they have been practicing together for the last three months.

Junior goalie Adam Scheel was solid in net stopping 19 shots and recording his fourth career shutout. For his career, Scheel is (32-14-4, a 2.07 GAA and a .907 save percentage).

Freshman Riese Gaber with an absolute rip off the feed from Pinto! @UNDmhockey#UNDproud | @MidcoSN pic.twitter.com/SXe3SK0toR

Back in August, the NHL returned to play in two pods, one in Toronto Ontario, and one in Edmonton, Alberta. For the opening ceremonies, in Edmonton, Minnesota Wild defenseman Matt Dumba kneeled during the American national anthem. Dumba would later say that he regretted not kneeling for the Canadian anthem, too.

Pregame, during the day, there was a report that two UND players, Jacob Bernard-Docker and Jasper Weatherby, like Dumba, were going to kneel during the national anthem. That did happen. Postgame, head coach Brad Berry was asked what he thought about it. Listening to Berry’s comments, it sounds like this could be a one-time thing.

“We’ve given it a lot of thought here,” Berry said. “We have a tight-knit group that cares for each other. We have players from different parts of the country. In saying that, people have different beliefs. They have different thoughts, and one of the things that we are is respectable.

“This was thought about from a player standpoint. Jasper and JBD talked about it within the locker room. Everybody got their head around what was going on. And for the one time they did it, the one time tonight, it was something they wanted to do. Everybody, myself included, has different thoughts, different beliefs, as those guys. It’s a respect thing, and we want to make sure that nobody’s disrespected through what happened today. It was something that we talked about in the locker room. It’s part of the process here.”

“This is my third year playing with those guys, Kiersted said. “I knew Jasper coming in, and they’re both great human beings. You can see they’re very outspoken and ready to express their feelings the way they choose. I think there’s enormous respect in the locker room for those guys like you said. They’re leaders on the team that were elected this year (by their teammates), and that’s well deserved.”

“I’m just gonna go support them, Gaber said. “Everyone has their views and everything. There’s gonna be positive and negative feedback. Overall, I respect their decision.”