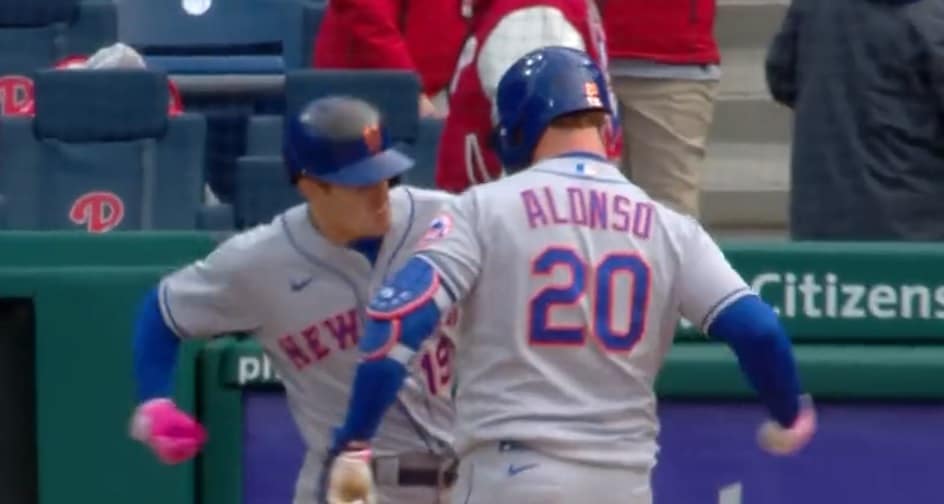 It would have been nice to steal that first game with a 9th inning rally. But let’s face it: The second game of today’s doubleheader was the one to have. The Mets had Chris Bassitt starting, while the Phillies went with a bullpen game as they wanted to save Ranger Suarez for Monday’s game in Seattle as they won’t have the 27th man available to them. So the Mets basically got a gift that they needed to take advantage of. Bassitt did.

And so did Pete Alonso.

PETE GOT ALL OF THAT ONE 🔥 pic.twitter.com/twFg6zb3i0

I say the following as someone who loves the fact that when Pete Alonso isn’t hitting home runs, he still finds a way to make contact and take the ball the other way for singles. He’ll strike out when he’s going bad, but he still finds a way not to be completely useless, which is a lot more than you can say about a lot of sluggers in baseball nowadays.

But when Alonso is hitting home runs? When he’s workin’ the money maker? Whoo boy. Because when he’s hitting home runs, the lineup becomes diverse. You can see the difference in this lineup with all of the hitters that make contact and grind out at-bats. Again, even when Pete is a little off, he does that too. But now add Pete “The Greatest Power Hitter On The Planet” Alonso to that mix. Now you’ve really got something cookin’. Now you have a team that nobody in this division can touch.

PETE DESTROYS ANOTHER ONE pic.twitter.com/QIiPNjGdRn

Pete’s two home runs helped the Mets to a 6-1 victory to send the Phillies to Seattle very tired, and very frustrated. You thought that team was in a bad way on Thursday night, check what’s waiting for them on the other side of a long plane ride:

Pitchers the Phillies are set to face on their 7-game West Coast trip:

Ay cono. Meanwhile, the Mets have to deal with an arduous train ride to Washington for a day off, while the Nationals will be traveling from Los Angeles. Aaaaah.

A couple of things I want to bring up from this second game. First off, this was not a balk:

This was called a balk on Chris Bassitt.

(He got out of the inning by striking out Rhys Hoskins) pic.twitter.com/8TZIQHrQT0

Mark Ripperger is really lucky that Bassitt got the four strike strikeout on Rhys Hoskins on the next pitch with no damage. (In a related story: HA HA SUCK IT RHYS!) The most scorn he got was Max Scherzer LOL’ing at him in real time.

If the SNY broadcasts were set in a playground, Gare and Keith would be the ones facing Steve backing him up, and Ronnie would be the guy sneaking behind him so that Steve could fall over him while backing up. Let this be a lesson to all of you: Don’t brag about your white shoes.

Third and final point: With the score 6-1 in the ninth, Jean Segura got a base hit off Seth Lugo with one out and nobody on. In any other circumstance this would be a footnote. But considering the Thursday Night Comeback, and considering it was Jean Segura I thought “uh-oh”. It was a faint thought, but the worst thing the Mets could have done was choke one back to the Phillies so soon.

But then I noticed something interesting: With one out in the 9th, Buck Showalter had Edwin Diaz warm up. When I saw that, I thought of two things: First: Former Met Ricky Bottalico complaining that Joe Girardi should have had his closer come in the game with a six run lead. It’s something I heard respectable Phillies fans tell me. (Okay, one.) Second, all the times Luis Rojas and Mickey Callaway couldn’t grasp the small detail of having a reliever warmed up and ready to go before things get to the point that they have to come in with the bases loaded and nobody out. At that moment, my confidence in Buck was reaffirmed. Not that it needed reaffirming, but it was reaffirmed much the same.