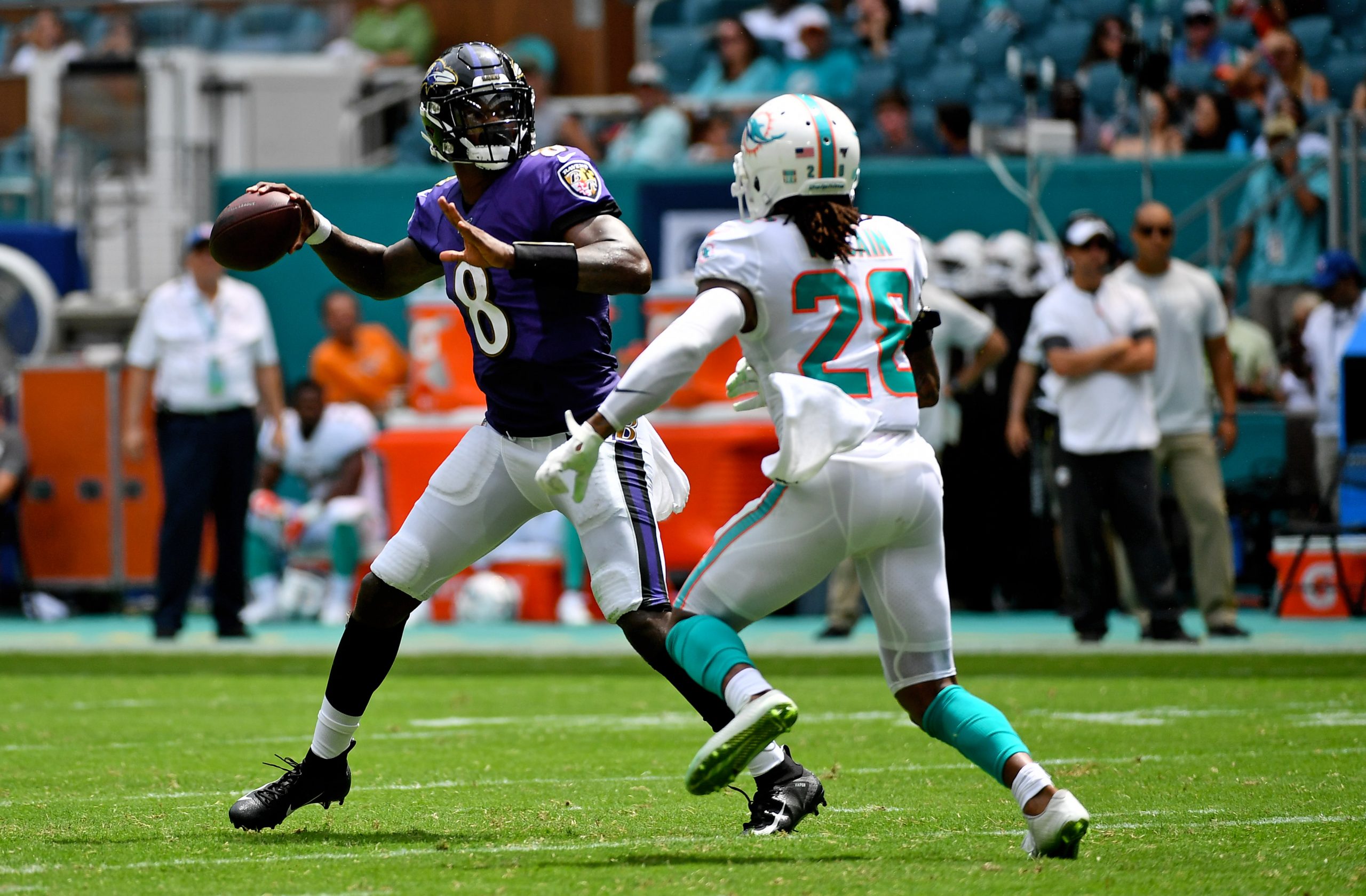 What a dud on offense for the Ravens! It was difficult to watch, and left some questioning the general health of Lamar Jackson, who seemed like a shadow of his previous self.

It was a stunning regression by Greg Roman’s offense.

Quarterback Lamar Jackson had the worst regular-season game of his four-year career because the Baltimore Ravens couldn’t handle the pressure.

In a 22-10 upset loss to the Miami Dolphins, Jackson faced 24 defensive back blitzes — the most any defense has sent at him and the most DB blitzes any quarterback has faced since 2015. This was the fewest points Baltimore has scored in Jackson’s 46-game career (previous low was 17 points), and it came against a two-win Dolphins team that had the NFL’s 30th-ranked defense.

Jackson was sacked four times and was limited to 277 total yards (238 passing and 39 rushing).

On one fourth quarter pass, the Dolphins blitzed four defensive backs, the most on a single blitz all season. Jackson slamming the ball in frustration became a familiar sight as drive after drive ended in a punt.

The Ravens (6-3) now lead the AFC North by a half-game, and the pressure is really on Baltimore. After next Sunday’s game at the Chicago Bears, the Ravens’ last seven games are against teams who currently have winning records.

Xavien Howard forced a fumble and returned it 49 yards for a touchdown, Tua Tagovailoa came off the bench and capped his night with a 1-yard sneak for a score with 2:19 left and the Dolphins stunned the Baltimore Ravens 22-10 on Thursday night.

“Any win is good,” Tagovailoa said. “No rumors, no external factors of noise had anything to do with what we did tonight.”

The Dolphins (3-7) got three field goals from Jason Sanders in what became their second win in five days. Tagovailoa — who couldn’t start because of a fractured finger on his left, or throwing, hand — threw for 158 yards in relief of Jacoby Brissett, who passed for 156 yards before needing to depart in the third quarter with an injured right knee.

“I think it’s tough coming into a game, second half,” Tagovailoa said. “You’ve got to warm up, you’ve got to get your head back into the mindset of going in and playing, but that’s the NFL. You’ve got to be ready at any time.”

Baltimore’s streak of 51 regular-season games with at least 14 points — the second-longest such streak in NFL history behind a 63-game run by New England from 2009 through 2013 — came to an end.

“We just played poorly and it’s because of our coaching,” Ravens coach John Harbaugh said. “It starts with me. I didn’t do a good job getting these guys ready.”

Miami’s defense carried an offense that had one quarterback get hurt, have an injured one take his place, and saw its only trip to the end zone in the first 57 minutes come from an offensive lineman who reached just far enough on a back flip to get the ball over the goal line — only to have it not count because he wasn’t an eligible receiver.

Didn’t matter. The offense did enough, and the defense did more than enough.

Lamar Jackson completed 26 of 43 passes for 238 yards and a touchdown for Baltimore (6-3). Mark Andrews had the scoring grab for the Ravens, who had dominated Miami in the teams’ most recent three meetings going into Thursday — winning by a combined 137-16 score.

Brissett had a 52-yard completion to Isaiah Ford late in the half on what appeared to be a busted play that turned into Miami’s longest gain of the season — to that point, anyway. Sanders connected on a chip shot, the Dolphins took a 6-3 lead into the break and, somehow, had the lead for good.

Andrews’ scoring catch got Baltimore ton 15-10, just close enough for it to seem that Miami was on the ropes. Tagovailoa found Albert Wilson for a 64-yard gain — Miami’s longest play of the season and the longest pass of Tagovailoa’s NFL career — with about three minutes left, and then the QB muscled in from the 1 to seal the win.

“We just didn’t play a good football game,” Ravens defensive end Calais Campbell said. “At the end of the day, they played better football than us today.”

The closest either offense came to the end zone for the game’s first 55 minutes was a play midway through the third quarter, when Tagovailoa completed a pass to right guard Robert Hunt. The lineman rumbled toward the goal line, got flipped over and appeared to reach the ball over the plane.

It wouldn’t have counted anyway. Hunt wasn’t an eligible receiver, the Dolphins settled for a field goal and a 9-3 lead.

And soon afterward, finally, a TD happened. Howard stripped the ball from Ravens receiver Sammy Watkins after a catch on the ensuing Baltimore possession, picked up the fumble and scored to put Miami up 15-3.

“A great play,” Dolphins coach Brian Flores said. “X, he’s done a great job for us and he showed up again, made a big play in a big moment. We needed it. Got it out, scooped and scored. Big play in the game.”

The Ravens outgained the Dolphins, 93-11, in the first quarter and they only had a field goal to show for it. That’s been an ongoing problem for Baltimore, which has scored one first-quarter touchdown in its last seven games. Earlier this week, Jackson said he “had no clue” why the Ravens are starting so slow. Baltimore obviously found no answers in Miami.

Ravens: CB Tavon Young, who had been dealing with a knee issue, suffered a foot injury in the second half.

Dolphins: Brissett appeared to want back into the game not long after hurting his knee, but Tagovailoa finished the game for Miami. “We just decided to stay with Tua,” Flores said.