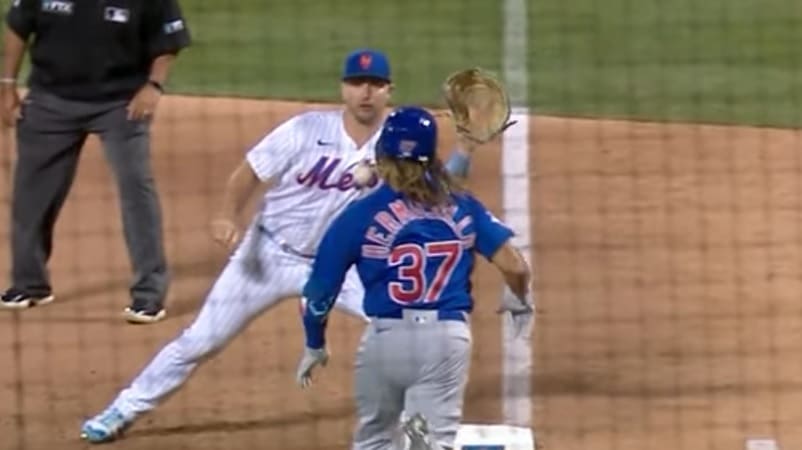 You play with fire, you get burnt to a crisp. The Mets are playing with fire as they have lost this series with the Cubs after a bizarre 4-1 Tuesday loss. It was bizarre in form and function, in cadence and in application. Bizarre, most obviously, because they scored three runs of Jacob deGrom. (Jacob got on himself after the game for not throwing zeroes as of any mere mortal, even one that breathes the occasional molecule of immortality, can shut everyone out every night.) One on a long home run by Ian Happ (forgive the pun but, it happens). And two more runs where two singles and two sacrifice flies to score them sandwiched a generally infuriating play that went against the Mets on this occasion:

Micahel Hermosillo puts down a bunt and is hit with the ball while running inside the line. Umpires did not call him out and the Cubs hit a sac fly the following at bat pic.twitter.com/J02ec5IXSl

It’s infuriating because this play happens millions of times and yet is never called the same way twice. By the letter fo the law, Hermasillo should have been called out because he was clearly inside the baseline. But the problem is that because the base is on the inside of the baseline, a runner has to run inside the line to hit the bag straight on. (If MLB wants to prevent injuries, by the way, they should just double the size of first base and put the other half in foul territory, like softball. Then there would be no excuse for a runner to go inside the line.) This play happens all the time, to the point where some analysts say that the catcher should always hit the runner in that case because then it forces the umpires to call him out. Well, obviously, that didn’t happen (and I don’t think it was some underhanded scheme by McCann to force an umpire ruling … it was just a terrible throw.) Sometimes, this play is called to the letter of the law. Other times, like tonight, it’s called by the spirit of the law. This is the most inconsistent call that umpires make, and Major League Baseball really needs to study this going forward. And the umps need to decide if they’re going to call the rule, or call common sense. Don’t change this philosophy every night.

It was bizarre because Pete Alonso, who is still struggling, had a meltdown in the first inning after he hit a foul ball that missed being a homer by about two feet, jogged all the way to third base hoping the umpires would change their minds, and then after walking on the next pitch he threw all of his equipment away in disgust like a child that rage quite a video game. Then he freaked out at Sampson because … well God knows why he freaked out at Sampson. It was a sequence of events that will give everyone who thinks the Mets are playing frustrated more fodder for their talk radio shows and their blogs. They might not be wrong.

The Mets: “Ah a nice easy series to help us in the NL East race with the Braves.”

Adrian Sampson will not remind anyone of Rick Sutcliffe, and these Cubs will not remind anyone of the 1984 N.L. East champs. But the Mets sure as hell made Sampson look like, well if not Sutcliffe, then definitely his rotation mate Steve Trout who went 13-7 but with a 1.38 WHIP and close to three walks a game. Sampson had four in six innings but the Mets somehow only got two hits off him as they went down 4-1 to clinch a series loss. Maybe that’s why Alonso was so upset … he could tell the future. You just can’t let Adrian Sampson beat you. (Hell, I’m still upset that Trout somehow pitched two complete games against the Mets in ’84.)