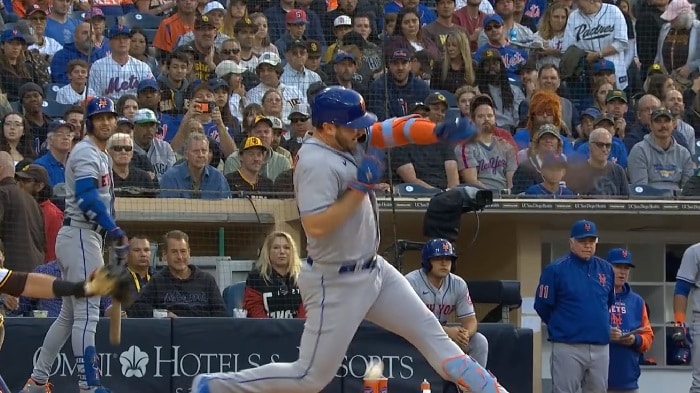 In the first inning, Starling Marte clearly tweaked his quad on an attempted steal of second base, but he stayed in the game.

Then, Yu Darvish led off the top of the second inning by hitting Pete Alonso in the hand, forcing him to leave the game.

Then, to lead off the bottom of the second, Marte decided enough was enough and left the game.

Nothing that happened after that outside of the MRIs mattered. THe Mets lost 7-0 to the Padres as they were no-hit for five innings and had two hits all game against Darvish and friends. Taijuan Walker struggled but somehow went six. Colin Holderman somehow turned into Nuke Laloosh, and that’s really all you need to know about that. They could have lost 30-0 and it wouldn’t have mattered. All that matters is the imaging on two important members of the starting lineup. Marte was diagnosed with left quad tightness, which could be tricky for someone whose game is predicated on his speed on the bases and in the field. But at least it doesn’t seem series. As for Alonso? Getting hit in the hand with all of those millions of bones in that hand?

UPDATE: X-rays on Pete Alonso's right hand came back negative, the Mets say. No broken bones for now, though he'll undergo further tests to be certain.

If you’ve watched Mets baseball for the last 100 years, you tend to learn a thing or two about medicine and the human body. What I’ve learned is that those further tests are incredibly important, as broken bones aren’t usually spotted on the initial MRO because of whatever swelling is in the hand. Once the swelling goes down, then you’ll know the truth as to which bones are broken. I know there’s something called a hamate bone because James McCann broke it along with countless other Mets since 2003. We’ll soon find out for sure if there is a bone in Pete Alonso that needs healing.

As good as the Mets lineup is, Alonso is the one that makes it hard to navigate He’s the true threat that causes ripples throughout the lineup, and he leads the league in f*cking RBI. So if you can put together a prayer circle overnight, do it.

Im blaming tonight’s performance on Jason Vargas attending the game. If Steve Cohen Is serious about winning he’d find a way to get him banned from all 30 ballparks