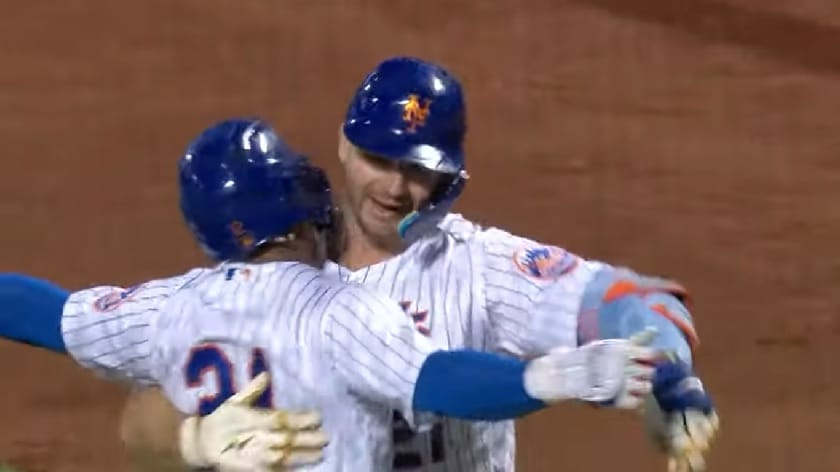 I frequently have dreams where I’m late for school and I have to take a test for a course that I never attended one single class for. I graduated college damn near close to 30 years ago, and yet I still have that anxiety. That’s what the Mets have been stuck in during the Cubs series. They’ve aced multiple tests this season. But the Cubs series represents that dream that they couldn’t wake up from. As if they’ve never picked up a bat before and it was spring training and all of a sudden they’re in a division race in September and OMG WHAT DO WE DO???

The beauty of baseball is that each day represents a chance to wake up from that dream and remember that they’re a 100 win team that it took until September for them to get swept in a series. Those who aren’t old enough to remember the juggernaut that was the 1986 team that they only know from “Once Upon a Time in Queens” would be shocked to know that in September, with their magic number of one, they lost three straight in Philadelphia to the Phillies which delayed their divisional coronation for three whole days (which turned into five). With the benefit of hindsight, it’s a mere footnote. But if Twitter had existed in 1986, the Phillies series would have exposed deeper flaws in the team in real time, and would have been the part of the corkboard that people would have pointed to when they were having trouble with Houston and Boston in the playoffs and World Series. We don’t have hindsight yet, so the Cubs series is still going to be the fly in the soup as the Mets head to meaningful October baseball.

The Mets bounced back effectively from the Cubs debacle on Thursday in a nationally televised game against the Pirates. Cookie Carrasco’s first six outs were strikeouts, and he finished with 11 in six innings, only giving up one run on four hits and two walks. Everyone produced in the Mets lineup, as Daniel Vogelbach led the way with three RBI on two hits and Jeff McNeil came around to score after both of his hits. Brandon Nimmo walked three times from the leadoff spot and scored twice. But the important contributions, as they will be for the rest of the season and playoffs … good and bad, were from Francisco Lindor and Pete Alonso.

Alonso had two hits and a walk  and, fittingly for this Mets season, drove in a run when he was hit in the back by a pitch. Lindor only had one hit, but it was a two run HR that broke the game open in the third and gave the Mets a 4-1 lead. It’s hysterical now that the narrative is that “the Mets don’t hit enough homers”, when all year they were lauded for “playing small ball and worrying about contact”. For years, the Mets only hit homers and it was a problem. But the Cubs series has inverted everything, and contact isn’t enough. For Lindor, it was his third home run since September 10th, but also his third home run since August 18th. So you can decide whether this constitutes the beginning of a power spree. It would certainly help as home runs are good, and they’re as good as they’ve ever been.

We’ve been here before … bludgeoning a bad team offensively and saying that “this is the springboard to a winning streak”, only to run smack dab into an endless dream dominated by the likes of Michael Hermosillo and Adrian Sampson. Was Thursday’s win the wake up call this team needed? Or will the Mets return to trying to hand in a paper for a course they aced months ago? We don’t have the benefit of hindsight is that this victory has definitely, positively, for absolutely sure put the Mets up a full game in the N.L. East standings. Thursday was a pass/fail course, and they definitely passed.

I gotta root for the Phillies for three days.